Yes, God did speak to his people of old by the prophets, and in many and various ways. And yes, now in these last days, God has spoken to us by his Son. But what I want us to do during this midweek Advent series is to see the connection between the two, namely, between how God spoke by his prophets and how God has spoken by his Son. There is a connection between the two. For those prophets of old, the Old Testament prophets, spoke of the coming of God’s Son. They prophesied his coming. And they did so in many and various ways. They used different ways of speaking to describe the coming of God’s Son. They used different terms and images.

So now during this midweek series, we will look at three of these messianic prophecies, as they are called. What we’ll do is take three of the Old Testament readings for this Advent season, which you are hearing on Sunday mornings, and on these three Wednesdays, we will take up those passages, one at a time. So under the overall series theme, “God Has Spoken by His Prophets,” we will consider, in sequence: first, “A Righteous Branch,” based on this past Sunday’s Old Testament reading from Jeremiah 33; then, next Wednesday, “The Messenger of the Covenant,” from Malachi 3; and finally, “A Ruler from Bethlehem,” based on the messianic prophecy in Micah 5. So that’s the plan: “God Has Spoken by His Prophets,” beginning today with “A Righteous Branch.”

As I say, our text is the reading from Jeremiah 33, so we would do well to place this reading within its context at the time of the prophet Jeremiah. Jeremiah was the prophet who spoke to Jerusalem right before, during, and after the nation of Judah was taken into captivity by the Babylonian army. Jeremiah was mocked and rejected for his warnings of God’s judgment to come in this form on Jerusalem. “No, no, Jeremiah, this can’t be! After all, we’ve got the temple of the Lord–the temple of the Lord–right here in Jerusalem! The Lord won’t let destruction fall on this city, when the temple is right here!” But Jeremiah would counter and say: “Woe to those who cry, ‘Peace! Peace!’ when there is no peace! Jerusalem, Judah, you have sinned against the Lord, you have disobeyed him over and over again, you have not listened to his word, and you have not repented. So, yes, this judgment will fall on Jerusalem, and very soon!”

Now what did that mean for what God had previously promised? It now looked like those promises were kaput, a goner. Not only had Israel been divided–that had happened several centuries earlier, when the kingdom split into north and south, Israel and Judah . . . not only had the northern tribes been dispersed and scattered–that had happened over a century earlier, when Israel was conquered by the Assyrians . . . but now Judah was taken captive, the holy city of Jerusalem was defeated, and the temple destroyed. Will the last one out please turn off the lights? For these were dark days indeed for the people of God. What has happened to the promises of God? Is there no hope anymore?

And on top of all this, there was one more promise that now seemed to be cut off forever. And that was the promise of a great king from the line of David. You see, the last surviving king reigning in Jerusalem was now dethroned and living as a captive over in Babylon. And this was a big deal. For the Lord had promised to King David that one of his descendants, someone from his line, would reign as king–not just as another in the long line of kings that did come from David–but no, this king, this great king, would inherit an everlasting kingdom. For the Lord had promised to David: “I will raise up your offspring after you, and I will establish his kingdom. I will establish the throne of his kingdom forever.”

But now with the last king of Judah living as a deposed, powerless exile in Babylon, that messianic promise sounded like a joke. It looked like the line of David was clean cut off. Like a tree cut down and felled, all that was left was a dead-looking stump.

But in those dark days, there was still a glimmer of hope. Isaiah had said there would be: “There shall come forth a shoot from the stump of Jesse, and a branch from his roots shall bear fruit. And the Spirit of the LORD shall rest upon him. . . . Righteousness shall be the belt of his waist, and faithfulness the belt of his loins.” From the dead-looking stump, a Branch, a righteous Branch, will come forth and bear fruit. The Lord will anoint him with the Spirit. So the Messiah, the Anointed One, will come, even when it looks like it is no longer possible. 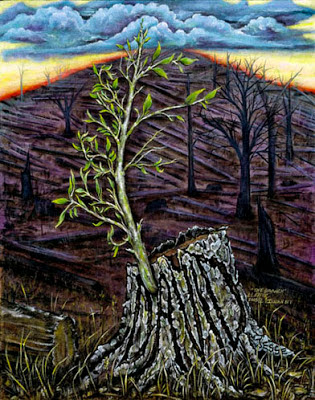 And now, after Isaiah, here comes Jeremiah saying the same thing. In fact, it’s so nice, he even says it twice. You heard it first in Jeremiah 23, this prophecy of a righteous Branch: “Behold, the days are coming, declares the LORD, when I will raise up for David a righteous Branch, and he shall reign as king and deal wisely. . . . And this is the name by which he will be called: ‘The LORD is our righteousness.’”

Friends, who is this righteous Branch? Of course it is Jesus, the Son of David, descended from the line of David, the King with the everlasting kingdom, the Messiah, the Anointed One, the Christ. Jesus is the righteous Branch prophesied by Isaiah and Jeremiah. When it looked like all hope had long been cut off–there had not been an active Davidic king ruling in Jerusalem for 600 years–here comes Jesus to fulfill the prophecy.

Not with pomp and circumstance, but in a quiet, unexpected way. This righteous Branch doesn’t come as a military king to defeat the Assyrians or the Babylonians or the Romans. He doesn’t come as a political-economic king to restore wealth and prosperity to Israel. But he does come as a mighty King, the mightiest of all. For he defeats our most dangerous enemies for us: sin, death, and the devil. But in a most unusual way: by suffering and dying, taking the sting out of sin and death for us, delivering us from the domain of Satan. This is the victory that King Jesus wins for us and shares with us. He puts us right with God. He accomplishes God’s righteous plan: to save us from our sins, to save us for himself, and to make us God’s holy people. The LORD is our righteousness, and Jesus is his name. He is the righteous Branch.

And so it is. Jesus is our King, and he is our righteousness. And now as his people, we share in his righteousness. Our only righteousness is his. He is the one who sets things right for us, and now we are his holy people. Our life is tied to his life, in every way: In our justification, how we are declared righteous before God, through faith in Christ, apart from works. But also in our sanctification, how we live out our life now as the people belonging to God. We are characterized by the Lord’s righteousness. We bear his name, placed on us in our baptism. And we live as his holy people, alive in the Spirit, safe and secure in Christ, full of hope for the future, our eternal future. Righteous Branch, and connected to him, righteous people–saved people, people put right with God, living as the people bearing his name.