We’ve all read church growth material which encourages you to share your faith while serving your neighbor through your various vocations. It’s a great blessing that God allows us to participate in His mission through the power of the Holy Spirit. What’s not so great is when that church growth material goads you into the “everyone a minister” paradigm, because everyone isn’t a minister. Even in the Lutheran Church-Missouri Synod, which has historically been strong on upholding the Office of the Holy Ministry, this non-Lutheran theology has made inroads. LCMS pastor Kent Hunter, the self-proclaimed “Church Doctor,” had this to say in 1983:

This has led, among other things, to layman in the LCMS performing Word and Sacrament ministry – a clear violation of Augsburg Confession Article XIV. Instead of a command from Christ to do these works, these laymen have a license from their District President. The go-to Bible verse to support the everyone-a-minister concept is Ephesians 4:11-12. 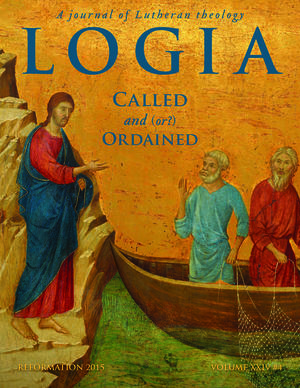 Before Rev. Mayes gets to the meat of his argument, he first defines lay ministry,2 and mentions that while pastors today do not share every function of the five offices listed in verse 11, such as performing miracles or predicting the future,

Yet the tasks of public preaching, teaching, administering sacraments, absolving the sins of the repentant, retaining the sins of those who do not repent, shepherding, overseeing the spiritual well-being of the people of God — these all are given to the one holy pastoral office for all times. Whatever the differences were in Paul’s day, it does not change the fact that all five offices were understood to share the same divine authority.

He then discusses διακονία (diakonia) in verse 12, meaning “ministry,” pointing out that

διακονία is a term used to depict the service that is done by a representative of a higher authority, such as by a prime minister or a governmental servant who answers to the head of state. Paul, Timothy, Silas, and the pastors described in the New Testament represent Christ and answer to him as well (see 1 Cor 4:1–4). Collins’s research shows that διακονία is not a term that can be used to describe the understanding of ministry that is derived from a body of believers “from below” and collectively transferred to one to do publicly.

Thus διακονία, properly exegeted, refutes the lay ministry notion. He then points out that an examination of the purpose clauses and result clauses demonstrates that it is an erroneous view “that the five offices of Ephesians 4:11 were given for the purpose of equipping saints for ministry, with the result of building up the church. Whoever reads this interpretation forces Scripture to say something it does not say.”

We then get to the heart of Rev. Mayes’ argument, the exegesis of the word καταρτισμὸν (katartismon), which in recent translations has been translated as “equipping.” In a thoroughgoing analysis he demonstrates that the chief sense of καταρτισμὸν is “to bring perfection, restoration, and unity.” This completely destroys the modern-day notion that verse 12 refers to the equipping of the saints. Not only that, it also changes the verse from a Law-orientation to a Gospel-orientation.

“The completing/perfecting of the saints” sums up the sacred duties of the apostolic office. Here, the chief article of justification is now involved. How are people, broken by sin, made complete and perfect? By no means is it by having lay people do works, not even the work of doing ministry! Rather, being complete and perfect is most certainly by grace through faith in Christ! No one can fulfill the demands of the law in order to be made whole. No one can add anything of salvific value onto Christ without robbing Christ of his glory. But Christ’s righteousness becomes the sinner’s by God’s grace. He who has Christ’s alien righteousness through faith is complete, whole, and charged perfect.

…Ephesians 4:12 is about pastors bringing saints the gospel and not directing saints to the law. This complete restoration and consummation (καταρτισμὸν) does not come about by saints doing a work of ministry (ἔργον διακονίας), but by that ministry that God himself does, which he has ordered to come publicly through the preaching, teaching and administering of the sacraments by called and ordained pastors.

The “lay” has therefore been taken out of “ministry” – but as Rev. Mayes states: “Do lay people also in turn serve their pastor and other lay people in various ways? Of course. That’s what the doctrine of vocation is all about, not to mention self-sacrificial giving.” This is good news. The missional burden is lifted from our shoulders. We laymen are free in Christ to share the Good News as we go about our lives, and Ephesians 4:11-12 has been restored to its intended meaning, as Article XIV of the Augsburg Confession proclaims: “Our churches teach that no one should publicly teach in the Church, or administer the Sacraments, without a rightly ordered call.”

You can purchase a copy of the current edition of Logia here. The first twelve years of Logia issues can be downloaded for free here.

2. “In this paper, lay ministry is defined as the public religious acts performed by people who are not called or ordained to the pastoral office, but are ‘empowered,’ ‘equipped,’ or ‘licensed’ by clergy and/or a congregation and/or a synodical district, apart from the church’s historic manner as found in standard Lutheran hymnbook agendas. These public religious acts are chiefly the public proclaiming of God’s word, publicly absolving sins in Christ’s stead, baptizing in situations that do not constitute a real emergency, consecrating the Lord’s Supper, and administering the Supper with or without the presence of a pastor.”