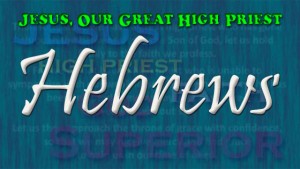 Our Epistle reading today from the Book of Hebrews talks about a high priest entering into holy places made with hands. It talks about this high priest entering these holy places every year with blood not his own. And when we hear these kinds of references, which are all over the place in the Book of Hebrews, we may be asking ourselves, “What is all this ‘high priest’ business? Where are these ‘holy places’? And what does this have to do with me?” Well, hang on, we’ll explain these things and what they have to do with us, because the point that Hebrews is making is that “Christ Is Our High Priest.”

So who was the high priest? Well, the first one to hold that office was Aaron, the brother of Moses, after Israel had come out of Egypt at the time of the Exodus. When they came to Mount Sinai, the Lord gave Moses instructions for establishing the priesthood among the people of Israel. Aaron was to be anointed as the first high priest, and all the priests after him would come from his line, his descendants.

There were very specific instructions about the priests, for instance, about what sort of garments the priests were to wear. For example, the priest would wear over his shoulders a piece with precious jewels on it, the jewels engraved with the names of the twelve tribes of Israel. This was to show that the priest was representing all of Israel before the Lord and that he was bearing their burdens before him.

Friends, this is a picture of how Christ is the priest representing us before God. Jesus is one of us, having come in the flesh as our brother. He can sympathize with our weaknesses. Like the priest bearing the names of the twelve tribes over his shoulders, Christ bears our names on his heart. Christ carried our sins to the cross.

Another thing about the priests of old. On their headgear, there would be a gold plate, inscribed with the words, “Holy to the Lord,” that is, set apart, dedicated to the Lord’s service. Again, this is a picture of Christ. For Jesus himself came set apart, holy, dedicated to do the will of the one who sent him. Jesus, the Son of God, obeyed the Father’s will completely. He came on a mission, to redeem mankind from sin and death and to make us God’s holy people.

So the priests of Old Testament Israel held an office that had been established by God, they represented the people before God, and they were set apart for the Lord’s service. And what did that service entail? Well, a big thing that the priests did was to offer up sacrifices. A lot of sacrifices. No, I mean a **lot** of sacrifices! There were burnt offerings and grain offerings. Peace offerings and sin offerings and guilt offerings. Sacrifices to remove uncleanness. Every kind of sacrifice or offering, to cover every kind of situation. If someone from the people of Israel found himself in one of the situations described in the Law of Moses, that person would bring the appropriate offering to the priest–say, a bull or a lamb or a goat, some animal from his herd–he would bring that animal to the priest in the courtyard of the tabernacle (or later, the temple), and the priest would sacrifice that animal, sprinkle the blood on the altar, and offer up the sacrifice as a burnt offering to the Lord, to cover the sin or the guilt or the trespass, as needed.

And so there were a lot of these sacrifices going on at the tabernacle on a daily basis. Sacrifices of bulls and goats and so on, 365 days a year. I mean, it was like a bloody butcher shop! Blood and smoke all over the place. So many sacrifices, because there were so many sins, so much uncleanness, on the part of the people. For the people of Israel were a sinful lot. When the Lord brought them out of their slavery in Egypt, what did the people do? They complained. They grumbled and groused and griped: “Hey, Moses, what have you done? Have you brought us out here in the wilderness to die? We liked the food better back in Egypt!” And when the people finally came into the Promised Land, what did they do? Even though they had been warned not to worship the gods of the pagan peoples around them, that is precisely what they did–worshiped the false gods and forgot that they belonged to the Lord alone. Even though the Lord had saved them and given them a good way to live as his people, Israel did not walk in the ways of the Lord their God. These were their sins, and thus these sins needed to be forgiven, needed to be atoned for. And the sacrifices that the Lord prescribed, administered by the priests–this was the Lord’s way at that time to provide for their forgiveness.

Now lest we look down too haughtily on the people of Israel, with all their grumbling and complaining and disobedience, maybe we should take a look in the mirror. How are we like them? You see, we too have been redeemed and rescued by the hand of God. God has brought us out of our slavery to sin and Satan. But how often do we complain, complain about what the Lord is not doing for us? How often do we fail to appreciate all that the Lord does provide us with? Our heavenly Father provides for all of our daily needs. God has brought us into his kingdom, a kingdom of peace and joy and the Holy Spirit, an eternal kingdom of everlasting life. Yet, in spite of all God’s goodness toward us, do we always walk in his ways? Or do we turn aside and go after other gods, the gods of this world–things like money and success and pleasure, all for me–without a thought of how the Lord is the one blessing us and how we might use what God has given us for his purposes, to spread the gospel and to serve our neighbor? Yes, like ancient Israel, we too have sins to confess, sins in need of forgiveness.

But, dear friends, the blood of bulls and goats cannot get the job done! It didn’t for ancient Israel, and it won’t for us, either. If the blood of bulls and goats could fully atone for sins, then why did the priests have to keep making those sacrifices, day after day, year after year? No, those sacrifices pointed ahead to the one final sacrifice, the once-and-for-all sacrifice, which Christ our high priest would make.

And so this is what our text is referring to when it talks about the high priest entering the holy places with blood, and so on. Hebrews is saying that what the Old Testament priests did, and specifically what the high priest did, was only a shadow–a foreshadowing, if you will–of what Christ our high priest would do and now has done.

You see, in Old Testament Israel, there was this place called the tabernacle, a portable tent that the Israelites took with them on their journey to the Promised Land. And later, when they got settled in the land, the tabernacle was replaced by the building of a permanent temple. This was the dwelling place of the Lord in the midst of his people. Within the tabernacle proper, there was first the section called the Holy Place and then, behind a curtain, the Most Holy Place, the Holy of Holies, where the ark of the covenant was located. These are the “holy places” mentioned in our text.

Now at any given time any of the priests who were on duty could enter the Holy Place. That was OK. But to enter the Most Holy Place, the Holy of Holies–that was more limited. Only the high priest could enter there, could go through the curtain and into the Lord’s presence. And he could do that only on one day of the year, that is, on the Day of Atonement, Yom Kippur. On that day, and only on that day, the high priest, and only the high priest, would go in with blood, and sprinkle that blood on the mercy seat, the cover of the ark of the covenant. But why? I thought there were all these other sacrifices going on in the courtyard every day of the year. Yes, but the Day of Atonement sacrifice, offered by the high priest, was sort of an all-comprehensive sacrifice, in case any sins were not atoned for, and to underscore the serious nature of sin, that sin must be atoned for, if the people were to have peace with God.

But the very fact that this Day of Atonement had to be repeated, year after year, showed that it never got the job fully done. And this, my friends, this is where Christ comes in. Christ is the high priest who does get the job done, once and for all! This is what our text is saying when it says: “But as it is, he has appeared once for all at the end of the ages to put away sin by the sacrifice of himself.”

“Himself the victim and Himself the priest,” as we sing in the hymn. Christ Jesus is the high priest who brings the blood to the throne of God. And at the same time Christ is also the sacrifice, the perfect sacrifice that covers all our sins. “Behold, the Lamb of God, who takes away the sin of the world!” The holy blood of Jesus, shed on the cross, covers all your sins. You are forgiven. Christ our Lord has ascended into heaven, and there is pleading his blood on your behalf, before the throne of God. Christ has entered the heavenly holy places, “into heaven itself, now to appear in the presence of God on our behalf.” There Jesus stands as our own high priest. He ever lives to intercede for us. Dear friend, when your sin and your guilt weigh you down, remember this: Jesus has you covered.

And from heaven, Christ will come again to take us home to himself. “So Christ, having been offered once to bear the sins of many, will appear a second time, not to deal with sin but to save those who are eagerly waiting for him.” This is our hope. This is our future, our eternal future. This is what we are eagerly waiting for: the return of Christ, when everything will be made right. Our bodies will be raised, glorious, and creation will be restored, better than ever.

Until that day, we have this assurance to hold on to: Christ is our great high priest. Our sins are atoned for. We have a high priest always standing before God: Jesus our brother, pleading his blood on our behalf, praying for us. He knows your name, and he’s got you covered.