Today is Martin Luther’s birthday. He’s 532 today, although I’d say he doesn’t look a day over 490. Yes, it was on this day, November 10, in the year 1483, that Hans and Margaretha Luther had a baby boy, in the town of Eisleben, Saxony. The next day, November 11, that little squirming baby was taken to the Church of St. Peter and St. Paul, there in Eisleben, and he was baptized. Since it was November 11, the feast day of St. Martin of Tours, the boy was given the name Martin. Martin Luther, born November 10, baptized November 11, 1483.

“What?” you say. “I thought Martin Luther didn’t become a priest until much later.” Well, yes and no. Martin Luther was made a pastor, an ordained minister, many years later, as an adult. But he became a priest on the day he was baptized. And you know what? So did you. For every Christian is born a priest in Holy Baptism. And out of that priesthood of the baptized, some are later called to be pastors. So our theme this morning: “Born a Priest, Made a Pastor.”

And I think it honors Luther’s memory and celebrates his life to point out that Luther upheld and taught both of these aspects of God’s work in the life of the Christian and the life of the church, namely, that God anoints all of us baptized to be priests and that he then calls some of us also to be pastors. Born a priest, made a pastor.

First, every Christian is born a priest. Keep in mind, at Luther’s time, becoming a priest, that is, becoming an ordained priest in the church, having a specifically religious vocation, becoming a monk or a nun or a priest–this was seen as a higher calling, a holier estate, than living a merely mundane, secular, ordinary life. You were racking up points with God by being a religious priest. And Luther himself had gone along with that line of thinking when he entered the monastery.

But the more Luther read the Bible, the more he saw this notion of the religious priest holding a holier estate didn’t line up with God’s word. What Luther read in the Bible was that every Christian had a holy calling and could serve God in any honest vocation that serves his or her neighbor. The mother changing her baby’s diaper was doing a more God-pleasing work than the Carthusian monks withdrawing from the world and babbling away. The butcher or the shoemaker serving his customers well was a channel of God’s blessing by providing for people’s daily needs. Luther rescued the doctrine of vocation from the dung heap it had been consigned to. In the Catechism’s Table of Duties, he quoted Bible passage after Bible passage, to show that any Christian in any walk of life was carrying out a holy calling when he or she performed the responsibilities appropriate to that person’s station in life, whether in the church, in the government, in the workplace, or in the home.

What Luther found in the Scriptures is what is sometimes called the priesthood of all believers, or the priesthood of the baptized. All of the baptized have a spiritual calling. They are set apart and sanctified, dedicated to the Lord’s service by virtue of their baptism. This is a lifelong calling, this priestly work of offering your whole life as a spiritual sacrifice. Luther found this in passages like those we heard earlier. Romans 12: “I appeal to you therefore, brothers, by the mercies of God, to present your bodies as a living sacrifice, holy and acceptable to God, which is your spiritual worship.” 1 Peter 2: “You yourselves like living stones are being built up as a spiritual house, to be a holy priesthood, to offer spiritual sacrifices acceptable to God through Jesus Christ. . . . You are a chosen race, a royal priesthood, a holy nation,” and so on.

Now what was even more pernicious than the notion that ordained priests held a holier estate than the laity was the idea that the priests could offer up meritorious sacrifices by the performance of their work. But this robbed Christ of the glory that is due him, for only he, Christ, has offered up the one and only sacrifice for all sin for all time. Only Jesus, the Son of God who died on the cross, atones for our sin. There is no other. Jesus Christ is our great High Priest. He entered the heavenly Holy of Holies with his own blood, the perfect sacrifice to cleanse us from all sins. He is your High Priest. His blood pleads for you. His blood cleanses you and cleanses all your works. Now you are God’s holy people, with a clean slate, with a new nature, with the Holy Spirit, set apart and equipped to do good works, which God has already prepared for you to do. Because Jesus is our great High Priest, who atones for our sins and cleanses us, apart from anything we do, now we are his holy priesthood, enabled and empowered to do good works, offering up spiritual sacrifices, as God’s priestly people.

This is the good news, the gospel of forgiveness, life and salvation in Christ. This is the justification of the sinner, by grace through faith in Christ, which was the hallmark of Luther’s teaching. It shone through so brightly, in all the writings and the reforms that he undertook.

And so in this way Luther was fulfilling his vocation as a pastor and teacher in the church. Not everyone has this particular calling, but some do, and Luther did–and man, do we give thanks that he did! What a blessing to the church this man’s work was and still is! Think of all the contributions: The great treatises, such as “The Freedom of the Christian.” The reform of the Mass. All the wonderful hymns: “A Mighty Fortress”; “Dear Christians, One and All Rejoice”; “O Lord, We Praise Thee”; “Lord, Keep Us Steadfast in Your Word.” The list goes on and on. Then there are the Catechisms, Large and Small. Luther’s Small Catechism has probably had more positive influence on the faith of so many millions than just about anything else I can think of. The Lord Jesus, when he ascended on high, gave gifts to his church–apostles, prophets, evangelists, pastors and teachers–to build up the body of Christ. And certainly Dr. Luther, with his prolific and productive ministry, has been one of the greatest of those gifts in the entire history of the church. Luther was made a pastor, and he definitely made the most of it.

How about us? We pastors, how are we fulfilling our vocation? Let us receive God’s forgiveness for the ways in which we have failed. Let us seek God’s help to make the most of our calling. In our preaching and our teaching. In our conduct of the liturgy. In our administration of the sacraments. In our pastoral care. In ministry to the sick and the shut-in, to the wayward and the straying, to families and singles, to widows and the needy. Brothers, we have been made pastors, we have been placed into the office of the ministry. This is the Lord’s work, and that means he is committed to helping us carry it out. And he will do it.

Born a priest, made a pastor. Luther upheld both callings. Listen to what he wrote that puts this all in perspective:

“Before anyone becomes a preacher or a bishop, he must first be a Christian, a born priest. No pope or any other man can make him a priest. But having been born a priest through Baptism, a man thereupon receives the office; and this is what makes a difference between him and other Christians. Out of the multitude of Christians some must be selected who shall lead the others by virtue of the special gifts and aptitude which God gives them for the office. Thus St. Paul writes (Eph. 4:11, 12): ‘And His gifts were that some should be apostles, some prophets, some evangelists, some pastors and teachers, for the equipment of the saints’ (this means those who are already Christians and baptized priests), ‘for the work of the ministry, for the building up of the body of Christ’ (that is, the Christian congregation or church). For although we are all priests, this does not mean that all of us can preach, teach, and rule. Certain ones of the multitude must be selected and separated for such an office.”

“But you must know this, as I have also stated before, that Christ is the only High Priest. Before we attempt to do such priestly works, we must have the benefit of His priestly office; yes, we must possess it. The doctrine and preaching by which we are saved comes from Him; He brought it from heaven. He alone has made the complete sacrifice for us all by which we are reconciled to God.”

“But after we have become Christians through this Priest and His priestly office, incorporated in Him by Baptism through faith, then each one, according to his calling and position, obtains the right and the power of teaching and confessing before others this Word which we have obtained from Him. Even though not everybody has the public office and calling, every Christian has the right and the duty to teach, instruct, admonish, comfort, and rebuke his neighbor with the Word of God at every opportunity and whenever necessary. For example, father and mother should do this for their children and household; a brother, neighbor, citizen, or peasant for the other.” 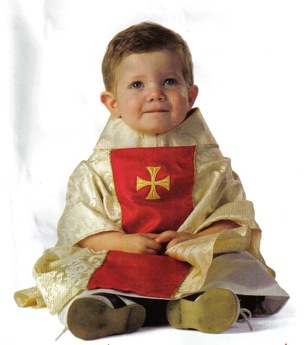 And that baptism, which Luther received on November 11, was his birthday into the priestly office. Born a priest, made a pastor. Both are the Lord’s work, his calling, his working through us, in whatever station in life we may find ourselves. The Lord worked mightily through Luther, as both born priest and made pastor. And, while maybe our work will not be as mighty as Martin’s, still the good Lord will work through us in our callings, as well. And the glory will all go to God.