When Martin Luther published his Ninety-Five Theses in 1517, he sought to redefine the foundation of late medieval piety: the sacrament of penance.  While he argued that Christ “willed the entire life of believers to be one of repentance,” Luther made it clear that this repentance was not the same thing as the confession and satisfaction administered by priests.  By the late Middle Ages this sacrament included contrition (sorrow for sins), confession, and priestly absolution.  Having received the forgiveness of sin’s guilt, the penitent then performed acts of satisfaction to pay for the temporal penalty of sin.  Purgatory was a place where a sinner fulfilled his or her satisfaction through suffering. An indulgence granted by the proper ecclesiastical authority (i.e., the pope) remitted the debt of the temporal punishment of sin. (Luther’s Works 31:25, Origin of Indulgences) 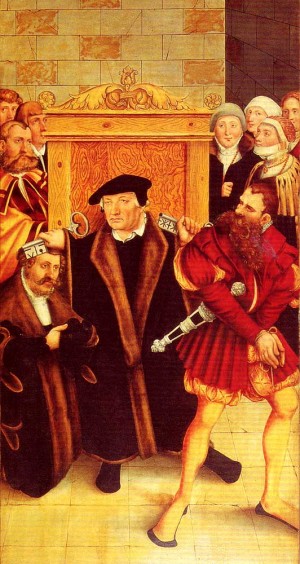 While Dr. Luther rejected this medieval understanding of penance, he formulated a proper teaching on repentance based on his study of the Holy Scriptures and St Augustine’s The Spirit and the Letter.  In 1519 Luther wrote a short treatise on the sacrament of penance that focused on faith in Christ’s promise of the forgiveness of sins received in the absolution. (LW 35:9-22)  Additionally, while Luther acknowledged that contrition existed in repentance, inner sorrow did not merit the forgiveness of sins or perfect repentance.  The following year in On The Babylonian Captivity of the Church he argued in the following manner:

“Beware then, of putting your trust in your own contrition and of ascribing the forgiveness of sins to your own remorse.  God does not look on you with favor because of that, but because of the faith by which you have believed his threats and promises, and which has effected such sorrow within you.  Thus we owe whatever good there may be in our penance, not to our scrupulous enumeration of sins, but to the truth of God and to our faith.  All other things are the works and fruits which follow of their own accord.”  (LW 36:85)

Here we have the foundation of the Lutheran doctrine of repentance as a gift received by faith.  The Law (threats) and Gospel (promises) work through faith in the Christian and bring forth contrition.  That is, while contrition is a necessary part of repentance, even godly sorrow does not earn forgiveness.  Similarly, good works result from faith, but do not earn forgiveness.  In 1528 Philip Melanchthon and Dr. Luther taught that contrition must be connected with faith in Christ’s free forgiveness of sins.  They asserted that God worked both sorrow for sins and faith in Christ through his Word, therefore, faith and contrition must always be together. (Instructions for the Visitors of Parish Pastors in Electoral Saxony, LW 40:295-97)

Finally, Philip Melanchthon included this biblical teaching of true repentance in Article twelve of the Augsburg Confession and its Apology.  Here he stated that repentance consisted of contrition and faith.  He defined contrition as the “terrors smiting the conscience through the knowledge of sin,” while faith trusts in Christ’s absolution, soothes the conscience, and delivers from terrors.  It is from this faith that the fruit of good works flow. Augsburg Confession 12