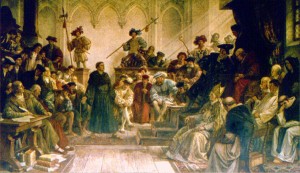 Each October, the minds of Lutherans turn to the Reformation. It really is a good thing; it’s important always to keep in mind where we’ve been in order to understand where we are. It’s good and salutary to remind ourselves that we are not some sect that wanted to get rid of everything that even smelled Roman Catholic. In fact, because we only sought to rid ourselves of the parts of our tradition that had obscured the gospel, we Lutherans are often accused of being “too Catholic!”

This is the time of year we break out beer steins and sing polka songs in German. This is the time of year we belt out our “A Mighty Fortress” with gusto. It’s the time when we remember that we stand in a noble and faithful line through Walther and Luther clear back to the Apostles, who taught the pure and unadulterated gospel to a sin-sick world. We get out the red paraments to remind us of the Holy Spirit’s refining fire. We thank God for His faithful work through men like Luther. There are lots of things we can do to commemorate this important feast in the church year. But the one thing we can never do is rest on past accomplishments.

The battle was not over in 1517 when Luther nailed the 95 Theses to the door. It wasn’t over in 1530 when we presented the Augsburg Confession. It wasn’t over in 1580 when the Book of Concord was compiled. It wasn’t even over in 1847 when the Missouri Synod was founded. It still rages now, and it will continue until our Lord returns in glory to end this age and usher in the day of eternal peace in the Resurrection of all flesh.

What is this battle? Simply put, it is the battle for the Gospel of Jesus Christ – that salvation is by grace alone through faith alone – and all its proceeding articles. The devil and his demons still prowl about looking for ways to deceive Christians and rob them of their comfort in God’s grace. False teachers still lie and deceive in the name of Jesus Christ. The philosophies of men still confound the faithful.

One of the most important lessons of the Reformation is that the battle to preserve the Gospel is not a tribal skirmish. Philipp Melanchthon and Matthias Flacius are two men who began on the side of orthodoxy and ended up as false teachers. The Crypto-Calvinists arose among the Lutherans to receive the benefits of the Peace of Augsburg without actually agreeing with us in matters of doctrine and practice. Even in the short history of our beloved Missouri Synod, the predestinarian controversy in the 1880s, controversies over public prayer and unionism in the 1920s and 1930s, and the conflict over Holy Scripture at the St. Louis seminary in the 1960s show us that we can never feel as though the battle is won while we are still in this world.

So what do we do? How are we going to continue to hold faithfully to the faith once for all delivered to the saints (Jude 1:3)? First of all, we are not alone. Our Lord Jesus has promised that He would never leave us nor forsake us (Hebrews 13:5), that where two or three are gathered in His name He is there (Matthew 18:20), and that the gates of Hell will never prevail against His Church (Matthew 16:18). He sends His angels to defend us, and He has given us one another that we can all stand firm together. Secondly, we must be regular hearers – and doers – of the Word. It is impossible to be transformed by the Word of God if we absent ourselves from it! It is impossible for us to be comforted and encouraged by words we never hear. So we come to church. While at church, we listen intently. We pray for God to give us wisdom through His Word. We study His Word. We read the Lutheran Confessions to find out how we Lutherans interpret God’s Word. And we don’t stop. We don’t rest. We fight on, making the good confession in season and out of season, knowing that our Lord fights beside us and for us. May God strengthen us all for this battle.