How would you like to enter the kingdom of God? I know I would. After all–literally, after all–the kingdom of God will be the only thing going. It is an everlasting kingdom, filled with peace and joy and life and blessing, and it will last forever. So who would not want to enter it? You’d have to be a fool not to. No, the kingdom of God–it’s the best thing going, and there’s nothing else like it.

So the question arises: How do you get in? How do you enter the kingdom of God? Today Jesus tells us. Basically it comes down to this. To enter, you need to “Receive the Kingdom of God like a Child.” Jesus says this in the Holy Gospel for today, from Mark 10, verses 13-16, as follows: “And they were bringing children to [Jesus] that he might touch them, and the disciples rebuked them. But when Jesus saw it, he was indignant and said to them, ‘Let the children come to me; do not hinder them, for to such belongs the kingdom of God. Truly, I say to you, whoever does not receive the kingdom of God like a child shall not enter it.’ And he took them in his arms and blessed them, laying his hands on them.”

Is it that children are inherently good? That they are born pure and sinless and only later, years later, perhaps then they become sinful? Are they innocent and thus automatically eligible to enter the kingdom of God, until they reach some later “age of accountability”?

These ideas, as attractive as they may sound to the world, are not true. Children are not inherently good and innocent and free of sin until some later date. That’s not what the Bible teaches–quite the opposite. No, the Bible says, in the words of the psalmist, “In sin did my mother conceive me.” And Jesus says: “Unless one is born of water and the Spirit, he cannot enter the kingdom of God. That which is born of the flesh is flesh, and that which is born of the Spirit is spirit. Do not marvel that I said to you, ‘You must be born again.’” Likewise, St. Paul says, “I know that in me, that is, in my flesh, dwelleth no good thing.” And again, in Ephesians, Paul describes our natural sinful condition, saying that we were “dead in our trespasses and sins” and that we were “by nature children of wrath, like the rest of mankind.”

In other words, we all are born sinners. This is a condition we inherited from our parents, Adam and Eve, who rebelled against God, and this sinful state has been passed down from one generation to the next ever since. The fancy term for this is “original sin,” and we’ve all got it. “Original sin” means the sin of our origin, passed down from Adam and residing in each one of us. Original sin is the loss and the lack of our original righteousness, before the fall into sin. And little children are born with it, this fallen sinful nature. You don’t have to teach a little baby to sin. He or she will grow into it quite naturally.

You and I and little children–we all are natural-born sinners. The proof of this lies in the fact that babies die. If babies were pure and innocent and right with God “just because,” then babies wouldn’t die. But they do. This shows that they are afflicted with this fallen sinful nature of ours, even from birth.

So it is not the case that babies are born pure and innocent and that up until a certain age they automatically qualify for entrance to the kingdom of God. That is not what Jesus is saying when he says, “for to such belongs the kingdom of God” or “whoever does not receive the kingdom of God like a child shall not enter it.”

You see, we don’t come before God waving our spiritual merit badges in front of his face. That doesn’t impress him. Quite the contrary. If we come before God on the basis of scorekeeping and the brownie points we think we have accumulated, we will always come out on the short end of the stick. Our sins would always be counted against us, and that is a loser’s proposition. As the Bible says, “There is none that is righteous, no, not one.” How is it with you? How do you see your standing with God? How do you come before him? Like a proud “adult,” waving your accomplishments before him? That ain’t gonna cut it. Rather, come as a little child, empty-handed, simply to be given to. This is what faith does, it receives God’s gifts and says “Thank you.” And so in this way, yours is the kingdom of heaven.

OK, so if God doesn’t wink at sin and pretend it doesn’t exist and he doesn’t just sweep it under the rug–and he does not do those things, for he is a righteous judge–then how do we get in, since we are indeed sinners? What is the nature of this gift we are receiving that gets us into the kingdom of God?

Well, this is why we need to be brought to Jesus, for he is the one who gets us in. It’s only by being embraced by him. Those arms with which he takes us in, those arms with which he embraced the little children–those are the same arms that were extended on the arms of the cross. This is how our sins are wiped away and we gain entrance to the kingdom of God.

The writer to the Hebrews puts it like this: “But we see him who for a little while was made lower than the angels, namely Jesus, crowned with glory and honor because of the suffering of death, so that by the grace of God he might taste death for everyone.” Yes, Jesus took the death that we deserve. He bore our sins in his body on the cross. You see, Christ came as our brother, in our flesh, the Son of God did, and lived the perfect life we do not live. He fulfilled all righteousness. Then this sinless one, the very Son of God, suffered and died in our place, shedding his holy blood for us as the one atoning sacrifice for sin, covering the sins of the whole world. This is how we are forgiven and our sins are not held against us, because of him.

And now this same Jesus is crowned with glory and honor. He is risen from the dead, he ascended into heaven, and now he is seated at the right hand of God the Father Almighty, ever living to make intercession for us as our own high priest. Friends, this is how you get in! This is how you are in! This is how you have access to God’s throne of grace now, and how you will be welcomed in on the last day when Christ comes again and raises us up to live forever! 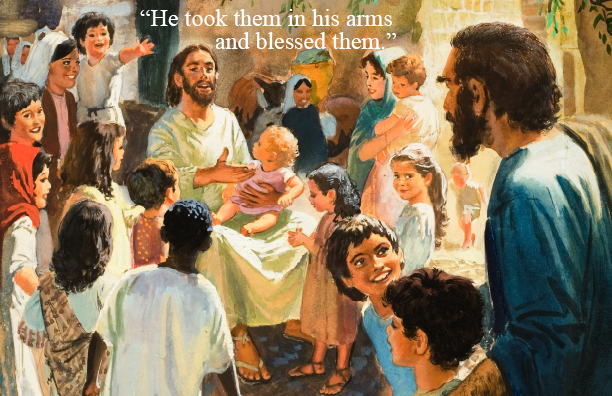 This is why Jesus can take us in his arms today and say of us, “Behold, I and the children God has given me.” No matter what our age, you and I come to Jesus and are embraced by him simply as children. It’s all a gift. It’s all a matter of being given to, receiving the kingdom of God, as Jesus says, “like a child.”