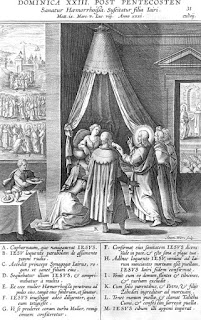 18 While He spoke these things to them, behold, a ruler came and worshiped Him, saying, “My daughter has just died, but come and lay Your hand on her and she will live.” 19 So Jesus arose and followed him, and so did His disciples.

20 And suddenly, a woman who had a flow of blood for twelve years came from behind and touched the hem of His garment. 21 For she said to herself, “If only I may touch His garment, I shall be made well.” 22 But Jesus turned around, and when He saw her He said, “Be of good cheer, daughter; your faith has made you well.” And the woman was made well from that hour.

23 When Jesus came into the ruler’s house, and saw the flute players and the noisy crowd wailing, 24 He said to them, “Make room, for the girl is not dead, but sleeping.” And they ridiculed Him. 25 But when the crowd was put outside, He went in and took her by the hand, and the girl arose. 26 And the report of this went out into all that land.

18 While he spake these things unto them, behold, there came a certain ruler, and worshiped him, saying, My daughter is even now dead: but come and lay thy hand upon her, and she shall live.

Lay thy hand upon her and she shall live. This was, especially at this time, a very remarkable example of faith, because nothing like it had ever occurred or been heard of. Again, the nature of the ruler’s faith in the person of Christ is such, that he certainly regards him as the true Messiah.

19 And Jesus arose, and followed him, and so did his disciples.

Rose and followed him. Although he had important things to attend to here, and had a sharp dispute with the disciples of John, (verse 14 ff,) yet notwithstanding all this, when he perceives this faith and confidence, he arises and follows.

20 And, behold, a woman, which was diseased with an issue of blood twelve years, came behind him, and touched the hem of his garment:

Touched the hem of his garment. Observe here what two great hindrances her faith overcomes. First, that her faith is so strong, and she can believe that she certainly will be helped, if she can only touch the hem of his garment. Therefore she does not regard it necessary to come into his sight, that he may behold her; yea, she does not think herself worthy that he should speak to her. This faith comes by the word, and she has nothing more than this word, and she desires nothing more than to touch his garment, which she uses as an external means and sign whereby she may indeed approach Christ; just as we also have nothing in this life and in the kingdom of faith, but the outward word and sacrament, wherein he gives himself to us, to touch and grasp, as it were, his garment.

The other masterpiece of her faith is, that she can overcome her own unworthiness, and cast away the great stone from her heart, which has so long oppressed her, and yet made her so diffident that she dares not, like other people, come openly before Christ. This is the sentence of the law (see Leviticus 15:19-30) She regarded her affliction as a judgment of God. Therefore this was not done with out a struggle and conflict, that her faith might attain what she sought from Christ. This struggle also shows, that when afterwards she saw that she was discovered, though already healed, yet she trembled, fearing he might turn upon her angrily. Mark 5:33.

22 But Jesus turned him about, and when he saw her, he said, Daughter, be of good comfort; thy faith hath made thee whole. And the woman was made whole from that hour.

Thy faith hath made thee whole. Such faith he exalts so highly that he ascribes to it alone the power and the work, that has helped her; just as though he had done nothing. See Matt. 8:13; 15:28.

Now, where this joy is, there good works must also soon follow, which manifest this joy. But these works and this gratitude God requires of us, in order that others may also come arid be benefitted.

23 And when Jesus came into the ruler’s house, and saw the minstrels and the people making a noise,

Fear not. Here the faith must also struggle and increase; for although he had a great faith, yet it would hardly have been steadfast if it had not been strengthened by the words of Christ, “Fear not.”

Now, when Christ goes with him into his house, this man’s faith must again be tried; for here he sees and hears nothing but tumult, crying and weeping, and blowing of trumpets.

24 He said unto them, Give place: for the maid is not dead, but sleepeth. And they laughed him to scorn.

The maid sleepeth. These are consoling words. He who can look upon a dead man, as if he were lying upon a bed and sleeping, may well boast that he possesses a wonderful art, which no one else enjoys.

Laughed him to scorn. Thus it goes; for God’s wisdom is so high that it regards the world’s wisdom as pure foolishness, and all the world regards the dear Lord Christ as a fool. Thus it is, when we preach that Christ is the man who helps, and our works do not help; then the world can not comprehend it ; it laughs and takesoffense. 1 Cor. 1:23.

Thus it must be with all those who learn vainly to pipe to death, whether they be false teachers or such as lead unchristian lives. All that is preached without regard to Christ is piping to death. In like manner it is with all life which is in contempt of God and disobedience to him.

25 But when the people were put forth, he went in, and took her by the hand, and the maid arose.

The maid arose. Life is a pure gift and present, and no merit. Christ gives life to the little maid out of grace freely, that she may know that he is her God.

What he did to this little maid, I must accept as a sign to myself, whereby I may learn to believe that he will also do the same to me at the last day. Upon this I must confide, and in the meantime be satisfied with the common help, which will be granted on the last day.