Twenty-Second Sunday after Trinity, or the
Fourth Sunday After Michaelmas

Forgive as Forgiven: The Unmerciful Servant 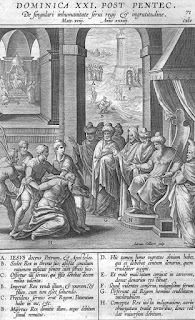 23 Therefore the kingdom of heaven is like a certain king who wanted to settle accounts with his servants. 24 And when he had begun to settle accounts, one was brought to him who owed him ten thousand talents. 25 But as he was not able to pay, his master commanded that he be sold, with his wife and children and all that he had, and that payment be made. 26 The servant therefore fell down before him, saying, ‘Master, have patience with me, and I will pay you all.’ 27 Then the master of that servant was moved with compassion, released him, and forgave him the debt.

28 “But that servant went out and found one of his fellow servants who owed him a hundred denarii; and he laid hands on him and took him by the throat, saying, ‘Pay me what you owe!’ 29 So his fellow servant fell down at his feet and begged him, saying, ‘Have patience with me, and I will pay you all.’ 30 And he would not, but went and threw him into prison till he should pay the debt. 31 So when his fellow servants saw what had been done, they were very grieved, and came and told their master all that had been done. 32 Then his master, after he had called him, said to him, ‘You wicked servant! I forgave you all that debt because you begged me. 33 Should you not also have had compassion on your fellow servant, just as I had pity on you?’ 34 And his master was angry, and delivered him to the torturers until he should pay all that was due to him.

35 “So My heavenly Father also will do to you if each of you, from his heart, does not forgive his brother his trespasses.”

23 If therefore is the kingdom of heaven likened unto a certain king, which would take account of his servants.

The kingdom of heaven. Here we must take particular notice of the words, “kingdom of heaven.” For this command of the forgiveness of sin must not be dragged into the kingdom of this world, where the offices and persons are different, and one always has power and authority over the other. The worldly govern ment was ordered and appointed by God, to prevent, restrain and punish the wickedness of the world. Not that it could punish all wickedness, but only the outward, gross crimes.

Such a “kingdom of heaven” begins here on earth, and is called by another name, the Christian Church. In this church mercy shall be exercised.

24 And when he had begun to reckon, one was brought unto him, which owed him ten thousand talents.

Owed 10,000 talents. He points out the first reason why we should forgive; namely, that his Christians should consider what kind of grace God has bestowed upon them. The Lord here places before our eyes what we owe to God, and what good ness he has shown us. To such a sum of money the Lord compares our sins, in order to convince us that we can never pay the debt, or render satisfaction for it.

When the law is clearly held up to a man, he sees what he ought to do, and has not done it.

25 But forasmuch as he had not to pay, his lord commanded him to be sold, and his wife, and children, and all that he had, and payment to be made.

Commanded him to be sold. With the selling the Lord indicates that we poor sinners are not only unable to pay, but we must suffer death on account of sin. Romans 6:23; Genesis 2:17.

26 The servant therefore fell down, and worshiped him, saying, Lord, have patience with me, and I will pay thee all.

Lord, have patience with me. Before the king holds a reckoning with him his conscience does not trouble him, he does not feel the debt, and would have gone on increasing it unconcernedly. But when the king begins to reckon with him, he begins to feel the debt. Thus it also fares with us. The majority are unconcerned about sin, and go on carelessly. But when the sins of our hearts are revealed to us, when the record of our sins is held up before us, then our merriment ceases. But now, whither shall we go? Shall we go and do like the servant, fall upon our knees [This we call in German zu Kreuze kriechen=to humiliate ourselves] and beg for mercy? The Lord wills this.

I will pay thee all. But you say the servant replies, “I will pay thee all.” Yes, the simpleton thinks he will pay all. That is the plague of all consciences, when sin comes and bites, and they feel how evil their relations to God are; then they have no rest, run hither and thither, seek help here and there, that they may get rid of their sins, and yet presume to think that they do much in paying God. Thus we also always imagine that it is too much, God will not be so gracious that he would remit all this to us, there must something yet be paid. Although this is indeed true, yet he who would obtain the forgiveness of his sins, must at least form the firm purpose to reform his life.

27 Then the Lord of that servant was moved with compassion, and loosed him, and forgave him the debt.

Forgave him the debt. This is the right and proper color in which one can and should paint God and his heart most appropriately. To forgive is not to reward or pay, but freely and graciously to give. This one should diligently learn. It is easy to say, Forgiveness of sins, as also the whole Christian doctrine is easy. Yes, if words could do all; but when it comes to an earnest trial, one finds himself mistaken.

Now, these are words of the Holy Ghost when it is said, I believe in the forgiveness of sins. What the Holy Ghost calls sin, must not be an imaginary, but a real, actual sin, as adultery, fornication and theft are real sins. Whosoever, therefore, would rightly know himself to be a sinner, should see to it, that it is not a dream or an imaginary thing with his sins; but realize that his sins are so great that they will condemn him to hell, if they are not forgiven. But then he must believe also in the forgiveness. Therefore do not listen to what thy heart says to it out of fear or unbelief, but what God says, who is greater than thy heart and my heart.

28 But the same servant went out, and found one of his fellow servants, which owed him an hundred pence: and he laid hands on him, and took him by the throat, saying, Pay me that thou owest.

Pay me that thou owest! Now if thou wouldst live, says the Savior, thou must do something, that all may be directed to the good of thy neighbor. For, “the servant goes out.” How does he go out? Where was he within? In faith he was within, but now he goes out; there he shall show himself toward the people in love; for faith leads man from the people in to God, love leads him out to the people.

The second reason why we should forgive our neighbor is, that the Lord intends that we should rightly consider and weigh the injuries and injustice which we have received from others, when we shall certainly find, if we lay it upon the golden scale, that the debt which we owe to God will be as ten thousand talents against one hundred pence, that our neighbor owes us.

The third reason is this, that in this parable the Lord calls all of us servants. This should also move us to exercise mercy and deter us from sin. For we are only “fellow servants,” and all of us have one Lord over us, who can and will punish us for the evil that is done by each one of us; to him we must commit all power and might, and not interfere with him. Romans 12:19.

To this point we shall hardly attain, that love prevail to such a degree that one shall do to another as God has done to himself. The ungodly world abuses the doctrine of the forgiveness of sin in the most shameful manner.

29 And his fellow servant fell down at his feet, and besought him, saying, Have patience with me, I will pay thee all. 30 And he would not: but went and cast him into prison, till he should pay the debt.

Cast him into prison. This is the common course of the world; when the sin has been forgiven, one soon forgets the forgiveness and grace of God, becomes more willful and worse than before. Matthew 12:43-45.

31 So when his fellowservants saw what was done, they were very sorry, and came and told unto their lord all that was done.

Fellow servants very sorry. The fourth reason for forgiveness is: Other servants will see and be very much distressed about it, come to the Lord and tell him all about it. The evident meaning of this is, that the Holy Ghost is grieved by the conduct of such Christians. It grieves those Christians especially who preach the Gospel; therefore they cry to God. And as the intercessions of pious people are not in vain or useless, so also the common curse, the common lamentation over the wicked is not in vain.

32 Then his lord, after that he had called him, said unto him, O thou wicked servant, I forgave thee all that debt, be cause thou desiredst me: 33 Shouldest thou not also have had compassion on thy fellow servant, even as I had pity on thee?

Oh, thou wicked servant! If God had acted thus and asserted his right, and should say, I do right that I punish the wicked and take what is my own; who will hinder me?— what would become of all of us? We should all go to perdition. Therefore, if thou wilt be in his kingdom, thou must follow his example of for giveness.

34 And his lord was wroth, and delivered him to the tormentors, till he should pay all that was due unto him.

Therefore his Lord was wroth. How does it come, that the Lord abrogates the right and in addition condemns this servant, because he claims his right? Answer: In order that we may see what a difference there is between God and the world, and how often that which is regarded as right and proper by the world, is wrong before God. As soon as you arise and return to God, you have the forgiveness. But he will insist upon this from you, that you also forgive, else you cannot be in this gracious kingdom.

35 So likewise shall my heavenly Father do also unto you, if ye from your hearts forgive not every one his brother their trespasses.

So likewise my heavenly Father. Our Lord has given tokens enough, that our sins shall be forgiven; namely, Preaching, Baptism, Holy Ghost, etc. Now we also shall give a token, by which we confess that we have received forgiveness of sins.

His brother. He calls us “brethren” among ourselves, among whom certainly no enmity or unkindness ought to exist.

From the heart. It is not enough to forgive merely with gestures, signs, mouth or tongue and friendly appearance; but the forgiveness must come “from the heart.”
Luther’s Explanatory Notes on the Gospels, pp. 108-110.