Twenty-first Sunday after Trinity, or the
Third Sunday After Michaelmas 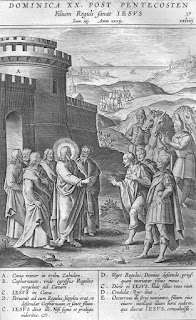 6 So Jesus came again to Cana of Galilee where He had made the water wine. And there was a certain nobleman whose son was sick at Capernaum. 47 When he heard that Jesus had come out of Judea into Galilee, he went to Him and implored Him to come down and heal his son, for he was at the point of death. 48 Then Jesus said to him, “Unless you people see signs and wonders, you will by no means believe.”

49 The nobleman said to Him, “Sir, come down before my child dies!”

50 Jesus said to him, “Go your way; your son lives.” So the man believed the word that Jesus spoke to him, and he went his way. 51 And as he was now going down, his servants met him and told him, saying, “Your son lives!”

52 Then he inquired of them the hour when he got better. And they said to him, “Yesterday at the seventh hour the fever left him.” 53 So the father knew that it was at the same hour in which Jesus said to him, “Your son lives.” And he himself believed, and his whole household.

54 This again is the second sign Jesus did when He had come out of Judea into Galilee.

47 When he heard that Jesus was come out of Judaea into Galilee, he went unto him, and besought him that he would come down and heal his son; for he was at the point of death.

The nobleman’s faith. It is certain that when a Christian begins to believe, temptation and persecution im mediately come upon him. And when this is not the case, it is a sign that his faith is not of the right kind and the gospel is not rightly apprehended. For the knave, the devil, has a sharp eye, and soon finds out who is a true Christian; therefore he strives hard to ruin him. But this comes to pass, however, that God may wake us up, and induce us to cry: O Lord, help us and strengthen our faith. Luke 17:5.

Three times John tells us that this nobleman had faith. For faith brings everyone very near to Christ through the gospel, with all his benefits, so that one Christian has just as much as another, and the child which was baptized today has nothing less than Saint Peter and all the saints in heaven; in the faith we are all equal, and one has the treasure as full and entire as the other. But this gospel speaks further of the increase of faith, and there it becomes unequal. Here is the difference between the two; that is, between him who has a thing, and him who comprehends it well; it is the difference between a strong and a weak faith.

Who was the nobleman? We do not know certainly whether this nobleman was a Jew or a heathen; but it matters little whether we know it or not. But this is the most important, that we see what great things the Word of God and faith are.

No doubt he had himself also heard the Lord preach. That is a noble heart, which so soon derives such a faith in Christ from one sermon and one miracle. (the miracle at Cana.)

This distinguishes a Christian from a heathen, that a Christian seeks his refuge in Christ as his own Savior. A heathen also does outward works; but faith makes the difference.

48 Then said Jesus unto him, Except ye see signs and wonders, ye will not believe.

Except ye see signs, ye believe not. How does this correspond? He says, Ye believe not, yet nevertheless have faith. The nobleman had confidence in the Lord Christ, that he could and would help his son; but this confi dence was, as yet, without the word, and was based only on the miracle which the Lord had performed in Galilee at the marriage in Cana. This we may indeed call faith, but it is, as yet, a very weak faith.

Though the Lord performed signs and miracles, in order that he might let himself be seen and induce the people to believe; yet his final intention was, that the people should look more to the word, than upon the signs, which were to serve the word as testimonies.

49 The nobleman saith unto him, Sir, come down ere my child die.

Come ere my child die. This was a hard word (v. 48.) It is a rebuff, where the hindrance begins to the newly begun faith. He does not soon desist (in faith and prayer): what lacks he yet? His faith does not yet extend so far, that he could believe that Christ could heal unless he was present. But the Lord does not for sake him, helps him to rise again, and sets him on a higher position.

50 Jesus saith unto him, Go thy way; thy son liveth. And the man believed the word that Jesus had spoken unto him, and he went his way.

Thy son liveth. As if the Evangelist would say, The nobleman has such a fine, excellent faith, that he believes the mere, simple word, and doubts not that when he comes home, he will find his son safe and sound; entertaining therefore a sure hope, although he neither sees nor feels the fulfillment of the promise. For one must not take into account that faith is weak, but we must have a care of this, that the devil does not tear the faith out of our hearts. It may happen, that he who has a weak faith remains firm, while he who has a strong faith may doubt and fall.

51 And as he was now going down, his servants met him, and told him, saying, Thy son liveth. 52 Then inquired he of them the hour when he began to amend. And they said unto him, Yesterday at the seventh hour the fever left him.

Thy son liveth. The word of God is a different word from the word of man; it accomplishes all things promptly, brings forgiveness of sins, and gives eternal life; and it costs no more, than that you hear the word, and when you have heard it, that you believe it. With Christ only a little word is necessary, and it is all sufficient.

53 So the father knew that it was at the same hour, in the which Jesus said unto him, Thy son liveth: and himself believed, and his whole house.

Faith strengthened by experience. This is a complete faith, which is confirmed by experience. What does he believe now? Not that his son had been restored; for he sees this with his own eyes. But out of his experience he now derives another faith; namely, that Christ will help him still more in other distresses. For new temptations come every day. But the more temptations of this kind a man has, the better it is with him; the more rebuffs he receives, the firmer he grasps Christ; and thus be comes enabled to bear all that Christ lays upon him.

He and his whole house believed. Thus he also increased in the faith, that he not only rose from a lower to a higher state, but he also brought other people to the faith. Faith can not do otherwise, it must speak, and be useful to the neighbor.

Thus we see that Christ makes no difference between the weak and the strong in faith, and will reject none; for a weak faith is also a faith.