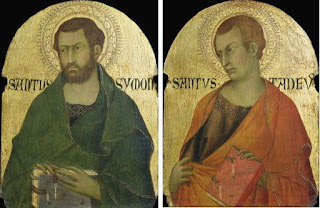 17 These things I command you, that you love one another.

17 These things I command you, that ye love one another.

Commanded to love one another. The first thing which the Lord here commands his disciples in the night in which he instituted the last Supper, and when he was to be taken and crucified the next morning, is: “These things I command you, that ye love one another.” The Lord comprises our whole life into this one commandment of love, that we Christians should live friendly among ourselves, and be mutually helpful in every way possible. For this is the nature of love, that we think or speak evil of no one, and besides do all the good we can. According to this short and simple command Christians shall govern all their actions; for they have much cause, not only on account of the example, that God has shown them all love and grace, but also, be cause we Christians are brethren to gether and children of God.

It is a service which rich and poor, great and small, of high and lowly stations can render; yea more, the most mighty and the greatest lords need such service, even as much and more than the humblest and the poor.

The other thing in this gospel is the comfort (v. 18-25). For here it stands, that whatever Christians may do, the world will oppose and hate them. But we know what follows from the hatred of the world, especially if they are persons that have the power and can do harm. Now it were a small thing if the Lord had said, If you become Christians the man-servant and maid-servant in your house, your neighbors and a whole village will become your enemies. But the Lord puts it much heavier, and severer, when he says : “If the world will hate you.” The world means not a single person, but all men. The art, however, by which we overcome the malice of the world, is this, that we despise their spite and insolence. When the devil feels this he departs. Therefore, though it be somewhat painful, yet we must endure it against the contempt of the world and take comfort from the cause as follows:

18 If the world hate you, ye know that it hated me before it hated you.

If the world hate you. The first cause is, that the Lord sets be fore us his own example, and says: “If the world hate you, ye know that it hated me before.” When we see and feel the hatred of the world, let us defy it and say: What more can you do than this? Or is this something new? You did this before to my Master, also, and yet have had to let him alone.

The world would love its own. The other cause is, that he says here: I declare concerning you, that you are “not of this world.” This is also a comforting work, because he painted the world so abominably despicable, that there is nothing more terrible for a Christian to hear or to think, than that he should be counted among that crowd. That the devil leaves you no rest, says Christ, is a sure sign that you belong to the kingdom of Christ. This is what he says: “But I have chosen you out of the world, therefore the world hateth you.” I am the one whom the world can not bear, and am the cause of this hatred and persecution, and for this cause have I chosen you, that you should not be of the world: that is, in the accursed devil’s hatred and envy in which the world is involved. Wherefore, if you fare like I do, resign yourselves to it, despise it and boast of me, and you will remain happy and undismayed, whereas the world will become mad and foolish over it. In this manner we shall be separate from the world.

20 Remember the word that I said unto you; The servant is not greater than his lord. If they have persecuted me, they will also persecute you; if they have kept my saying, they will keep yours also.

At the court nobody is ashamed of his sovereign’s colors, every one cheerfully wears them, and regards it as an honor. Now he will say, I am your king and have my courtiers, the Christians. Should they be ashamed of my colors, which I have worn in the world? That would, in deed, be an everlasting shame.

This is the parable. Now he concludes: “If they have persecuted me, they will also persecute you.” He who smites the Lord on the mouth will certainly not honor the servant.

21 But all these things will they do unto you for my name’s sake, because they know not him that sent me.

For Christ’s sake. The fourth cause is, that the Lord says: “But all these things will they do unto you for my name’s sake.” The hatred with which they hate you, will not arise on account of evil works or sins, as though you were knaves or thieves, murderers or adulterers, but only for this reason, that you will preach of me and say that they can and must be saved only through me.

This, in truth, is not a small consolation, when we rightly consider it. Though the world does not have or want Christ, yet it can not be exempt from suffering. Here two great misfortunes meet: the suffering itself, and the bad conscience. The Christians are, indeed, also poor sinners; yet the world does not hate them for this, but “for my name’s sake.” This is a very necessary comfort. For as soon as a misfortune occurs, we consider whereby we have deserved it.

But that they do all these things unto you, he says, is “because they know not him that sent me.” On that account you must not get angry, nor desire vengeance upon them; for they have their reward already; they are smitten with blindness and frenzy; yea, possessed of the devil, so that they are mad and foolish.