St. James the Elder the Apostle 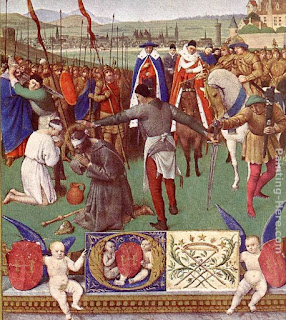 20 Then the mother of Zebedee’s sons came to Him with her sons, kneeling down and asking something from Him.

She said to Him, “Grant that these two sons of mine may sit, one on Your right hand and the other on the left, in Your kingdom.”

22 But Jesus answered and said, “You do not know what you ask. Are you able to drink the cup that I am about to drink, and be baptized with the baptism that I am baptized with?”

23 So He said to them, “You will indeed drink My cup, and be baptized with the baptism that I am baptized with; but to sit on My right hand and on My left is not Mine to give, but it is for those for whom it is prepared by My Father.”

24 And when the ten heard it, they were greatly displeased with the two brothers. 25 But Jesus called them to Himself and said, “You know that the rulers of the Gentiles lord it over them, and those who are great exercise authority over them. 26 Yet it shall not be so among you; but whoever desires to become great among you, let him be your servant. 27 And whoever desires to be first among you, let him be your slave— 28 just as the Son of Man did not come to be served, but to serve, and to give His life a ransom for many.”

20 If Then came to him the mother of Zebedee’s children with her sons, worshiping him, and desiring a certain thing of him. 21 And he said unto her, What wilt thou? She saith unto him, Grant that these my two sons may sit, the one on thy right hand, and the other on the left, in thy kingdom.

To sit on the right and the left hand. It is very well that some histories of the saints have been preserved in the Church, which are so carefully recorded in the holy Scriptures, in order that we may correct our own lives by their example. For, the Holy Ghost has so ordained, that the account was given, not only of their holiness, faith and good works, but also of their weakness and sins.

These two disciples made a cunning device; they are very wise fishers and reflect that they act in good time, before others come and take the honor from them. They persuade their mother to propose the matter, and think, Although we may fail, he will say, our mother acted foolishly, like a woman; but if the plan succeeds, we come off with honor. But he will hardly be able to deny this favor to our mother, as it is usually the case that women can more easily gain their cause, than men, for they can act wisely and persuasively.

Let us sit, etc. This is not only the shameful sin of pride and self exaltation; but they do not understand at all what Christ and his kingdom are.

Are ye able to drink of the cup that I shall drink of? The Lord gives them a very blunt answer. But does he use them roughly? or does he not want them any longer for his disciples, because they have been with him so long, and yet have learned so little?

No, he overlooks this foolishness, because they have not done it out of malice, but like children, from im prudence; he exhorts them most kindly, to desist from such a desire, and to get other ideas of his kingdom and their ministry.

Thus the dear saints may be a comfort to us; yet not in the sense that we may learn from the saints to sin, but that in temptations we may be comforted by their example: that as by grace their sins were forgiven them, so also our sins will be forgiven us; if we only remain in his house, our weakness and infirmities will not be dangerous to us.

You are concerned, he says, about your honors, but this will all come right of itself. The chair on which you are to sit has been enlarged; for in my Father’s house are many mansions; see to it that you get there. You will get into it, however, like myself by suffering and death.

Our Lord God pours out to every one his measure of what he must drink. Each one has his own quantity, one less, another more, a woman often more than a man. Others endure bodily sufferings and persecutions. We have no outward persecutions here, but we have at the same time something else, by which the devil plagues us in our heart and conscience. This is the livery which this king offers us; whoever is ashamed of it and will not wear it, is also ashamed of the Lord Christ. Reason argues that when one is in a bad condition he has an ungracious God. But here we see that this judgment is wrong.

But to sit on my right hand, etc. Here the Lord says that as a man, he has no power, that he is a servant, and answers the disciples according as they regard him. They regard him as a man, therefore he also answers as a man; therefore he has no power, in the light in which they here regard him, to seat them on his right or left hand. But when he shall come at the last day in his glory, then he will very certainly, as a mighty God, be able to seat his own in places of honor.

Here we must also mark well, that our dear Lord Christ will not have or endure any one to be equal to him in his kingdom and glory. For he it is, who has trod the winepress alone (Isaiah 63:3) he it is alone, who died for us and atoned for our sins with his blood.

Note: See here, say they, if a layman should discuss this text, he would soon fall into error, and think Christ was not God, because he says it is not in his power to bestow the privilege asked for. Therefore, say they, the Scripture is obscure, and must be elucidated by human learning. This is a glaring error, and means really to lead the Holy Ghost to school, and teach him how to speak. But that the Scripture appears obscure to us, is that we do not take heed, when it speaks to us of Christ’s divinity and humanity, and also that we want to interpret it according to our own understanding, which can in no wise be harmonized.

24 And when the ten heard it, they were moved with indignation against the two brethren.

When the other ten heard it. The other ten disciples are also not much wiser or more pious; those two want to be proud and exalted; these are angry, displeased, and unwilling. The dear Lord still tolerates and endures them, and conducts himself very friendly towards them, because they still cling to him.

Whosoever will be chief let him be servant. This means, that not only is worldly might and power taken away from the ministerial office, but this also is added, that it shall be entirely an office of service, wherein one has nothing but trouble and labor, and afterwards all kinds of ingratitude, yea, and of misfortune.

But, therefore, indeed, the hearers are under obligation, as the ministers can not otherwise be maintained, freely to give of their own goods to nourish them, (1 Corinthians 9:13-14,) that they both may remain under one Lord, their Savior.

28 Even as the Son of man came not to be ministered unto, but to minister, and to give his life a ransom for many.

Son of man gave his life a ransom for many. If any one, says the Lord, should have power and great glory, then I would certainly be entitled to it beyond all others. But especially should this text be heeded, because Christ says, “The Son of man came to give his life a ransom for many.” For this text teaches the forgiveness of sins, and how we can obtain for giveness; that such ransom has been given for many; that is, although it has been given for all men, yet there are but few who enjoy this ransom and are saved. (Isaiah 53, John 1:29, 1 John 2:2) The reason of this is, that all will not accept such a ransom. Some will not accept Christ at all. Some, indeed, do not expect to merit heaven by their works and do not deny Christ; but they have so much to do with the world, that they do not think of Christ.