Christian Freedom: Healing on the Sabbath 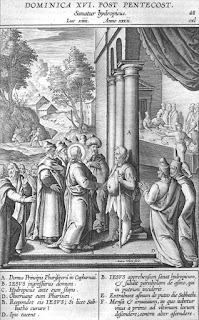 14 Now it happened, as He went into the house of one of the rulers of the Pharisees to eat bread on the Sabbath, that they watched Him closely. 2 And behold, there was a certain man before Him who had dropsy. 3 And Jesus, answering, spoke to the lawyers and Pharisees, saying, “Is it lawful to heal on the Sabbath?”

4 But they kept silent. And He took him and healed him, and let him go. 5 Then He answered them, saying, “Which of you, having a donkey or an ox that has fallen into a pit, will not immediately pull him out on the Sabbath day?” 6 And they could not answer Him regarding these things.

7 So He told a parable to those who were invited, when He noted how they chose the best places, saying to them: 8 “When you are invited by anyone to a wedding feast, do not sit down in the best place, lest one more honorable than you be invited by him; 9 and he who invited you and him come and say to you, ‘Give place to this man,’ and then you begin with shame to take the lowest place. 10 But when you are invited, go and sit down in the lowest place, so that when he who invited you comes he may say to you, ‘Friend, go up higher.’ Then you will have glory in the presence of those who sit at the table with you. 11 For whoever exalts himself will be humbled, and he who humbles himself will be exalted.”

Is it lawful to heal on the sabbath? These verses treat of two things: The one is common to all the Gospels; namely, in presenting before us the Lord Christ, what he is, and what we have to expect from him. And therein faith and love are pointed out to us. Faith in this dropsical man. He had previously heard of the kind ness of Christ, and accordingly be lieved that he would also show unto him his kindness and goodness. For if he had not heard something great and believed what he heard, he would not have followed him into the house. From this we may also imagine the love of Christ.

The other part is something remarkable, and it is also a necessary doctrine, which we must believe; namely, how to deal with the law and how far it shall be kept.

We say in the proverb: Everything depends on a good interpreter; this is especially true here, as concerning the law. The eye is a tender thing; but still more tender and softer is the conscience; therefore we see here and there how tenderly the apostles treated the consciences, in order that they might not disturb them by laws. Therefore we should know and keep the rule, which Christ himself gives and proves also by this story, that all laws, both human and divine, which treat of outward works, are no farther binding than charity extends. Love shall be an exposition of all laws; where love is wanting, all is vain, then the law is rather injurious, it may be what it will. The reason is, that all laws are given that they may establish love. Romans 13:8, 10.

Since in the Old Testament the law was neither understood, nor moderated according to love, God gave the people prophets, who should explain the law, not according to its strictness, but according to charity. When I therefore serve my neighbor and help him, I have kept the Sabbath right and well, though I have done work on it; because I did a divine work. This teaching concerning the Sabbath tends especially towards this, that we shall hear God’s word and do and live according to it. Hence with the Christians every day ought to be a Sabbath. Notwithstanding, Sunday is ordered for the common people, in order that every body may especially hear and learn God’s word and live according to it. But here we see what learned, ingenious and wise people come to, when they get so far astray as to despise God’s word.

Seeking the chief rooms. The other instruction is that we should not be imperious and exalt ourselves. Christ does not reprove the sitting in the highest seat, but that we should choose out and strive to sit in the highest seats. Not that a peasant should sit above a prince. For the Lord speaks here not of a worldly, but of a spiritual rule, which above all things requires humility.

To sit on the chief seats is not a play and dance, but it brings with it so much work and displeasure, that a sensible man cares very little for them. (See 1 Timothy 3:1) There fore everyone should be satisfied with his station and office, and be diligent, that therein he may be useful to the people. For God has pleasure and delight in them who in their station faithfully perform the duties of their office.

He that exalteth himself, etc. This is true not only before God, but also before the people, for all are disposed to hate the proud. But on the contrary, he that is humble wins the heart of God and man, so that God and all his angels, and afterwards also the people regard him as an especially noble jewel. Then follow also prosperity and blessing, as we see in Saul (1 Samuel 9:21) and David and others. See Psalm 113:5-8.