First Sunday After Michaelmas, or the 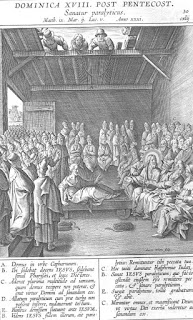 9 So He got into a boat, crossed over, and came to His own city. 2 Then behold, they brought to Him a paralytic lying on a bed. When Jesus saw their faith, He said to the paralytic, “Son, be of good cheer; your sins are forgiven you.”

3 And at once some of the scribes said within themselves, “This Man blasphemes!”

4 But Jesus, knowing their thoughts, said, “Why do you think evil in your hearts? 5 For which is easier, to say, ‘Your sins are forgiven you,’ or to say, ‘Arise and walk’? 6 But that you may know that the Son of Man has power on earth to forgive sins”—then He said to the paralytic, “Arise, take up your bed, and go to your house.” 7 And he arose and departed to his house.

8 Now when the multitudes saw it, they marveled and glorified God, who had given such power to men.

Seeing their faith. See here what pleasure Christ takes in faith, that he does not call everything which they did for the palsied man, works or a petition.

This means, indeed, to grant the prayers of the dumb.

Here we are encouraged to believe, and in the same manner to pray for others.

Here comes up the question about our own or another’s faith. They and not the palsied man had the faith, but he had also to receive faith or else their faith would have been unavailing. But they in their faith be sought Christ, that he might have a faith of his own. “For the prayer of faith availeth much.” (Mark 9:23) I can by my prayer and faith help another, that he may also believe; but I can not believe for him.

These words of Christ are of infinite sweetness. He calls him son, although he describes him as a sinner, when he says “thy sins.” Who can harmonize this? But faith harmonizes it thus, that there are two kinds of sinners; one who is of a broken and a contrite heart, and desires to be saved from his sins, is a son; but he who is obdurate and does not realize his sins, but regards himself righteous, is an enemy and a devil.

Be of good cheer. Cheer up; be strong. He does not use the word faith, but a much more emphatic and elegant one; be bold, undismayed, intrepid.

Thy sins forgiven. See here the most learned Physician, how nicely and certainly he knows how to heal the sickness of a broken conscience. As if he would say, It is easy to heal a disease, when the sickness of the soul has been taken away, which is the cause of the bodily disease. But there is an emphasis in the words, “they are forgiven;” namely, that no one can become freed from his sins, except by the forgiveness of the same. One man forgives another in such a manner that he thinks of it again the next day, or casts some thing up to him again. But when God forgives sin, it is a far higher thing, for God condemns no more. Isaiah 43:25.

Thus the Lord exhorts the palsied man first to exercise faith. And as soon as he believed those words, his sins were truly forgiven him. Therefore the word and faith must always finely go together.

3 And, behold, certain of the scribes said within themselves, This man blasphemeth.

“This man blasphemeth.” This the scribes said, because (according to their imagination,) Christ acted contrary to the law of God, since the law was not to pass away, but to be fulfilled; but that God only could set aside the law. Accordingly the offense, which the Pharisees and scribes took, appeared to be very just, as zeal for good works always appears to be very correct.

4 And Jesus knowing their thoughts said, Wherefore think ye evil in your hearts?

Wherefore think ye evil? As if he would say, What very venemous people ye are, that ye begrudge even the grace of God to this poor man, although ye do not lose anything thereby. Here he covertly castigates their covetousness and idolatry. For the priests thought by themselves, Who will in future bring sacrifices, if God can be propitiated by faith?

5 For whether is easier, to say, Thy sins be forgiven thee; or to say, Arise, and walk?

Whether is easier? As if he would say, Yes, ye know very well, which is easier or more difficult to say, this or that, one as well as the other. They were certain in their minds that they could secure forgiveness of sins for themselves and others by sacrifices and good works, which they performed only from habit; but to heal a man sick of the palsy, they would not so easily undertake to do.

6 But that ye may know that the Son of man hath power on earth to forgive sins, (then saith he to the sick of the palsy,) Arise, take up thy bed, and go unto thine house.

On earth. That the Lord says “On earth,” is especially to be well noticed, in order that we may not gaze up into heaven, or hope for forgiveness by means of other people’s good works or merits after we are dead, and in purgatory.

There are two ways to forgive sin: First, to drive sin out of the heart, and pour in grace; this God does himself. Secondly, the announcing of forgiveness of sins; this one man does also to another. But here Christ does both.

8 But when the multitudes saw it, they marvelled and glorified God, which had given such power unto men.

Such great power unto men. This power (to announce the forgiveness of sin by the word,) have all those who are Christians and are baptized. By such an office God has bound us together, that one Christian can always comfort another, speak kindly to him, and the other shall believe (in case the word has been rightly taught him) the forgiveness of sins in the name of Christ.