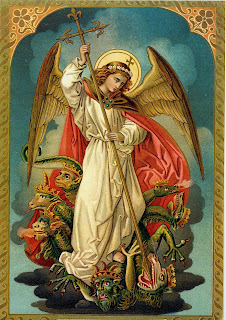 18 At that time the disciples came to Jesus, saying, “Who then is greatest in the kingdom of heaven?”

6 “Whoever causes one of these little ones who believe in Me to sin, it would be better for him if a millstone were hung around his neck, and he were drowned in the depth of the sea. 7 Woe to the world because of offenses! For offenses must come, but woe to that man by whom the offense comes!

10 “Take heed that you do not despise one of these little ones, for I say to you that in heaven their angels always see the face of My Father who is in heaven. 11 For the Son of Man has come to save that which was lost.

In this section the Lord delivers a good lecture to his disciples, who entertained such very fleshly and worldly thoughts of his kingdom. When the Lord Christ informed them that he would suffer and die, and had hitherto been among them as their Lord and Master, they thought that they must now consider which one of them should be the chief among them, and upon whom they should confer the government and the authority. But the true church knows of no other Lord and Master, than Christ only (John 10:27). In this church the Christians are all equal, and there no one shall exalt himself over an other. In the future life a child is just as much as I am.

Jesus called a little child to him. He makes himself lowly, calls a poor, despised child to him, sets it beside himself, presses it to his heart, and regards it as his treasure; yea, that it is almost equal to himself. By this he will say, I, your Master and Lord, am like this little child. Just so shall ye also be. And it is the will of the Lord Christ, that all true Christians should have the manner, simplicity and obedience of children; for the children abide by the truth, and a child is trained by hearing, and it lays no claim to wisdom and makes no effort to dispute.

Whoso shall receive one such little child. Oh, merciful God, one might well say, Why is this great honor bestowed upon me, that I shall have Christ and his heavenly Father and all the treasures of heaven and earth ? Answer: Whoso earnestly takes care of a child, and teaches it to know God, to pray, be chaste, temperate, obedient, faithful, quiet, truthful, etc., he receives Christ.

The Christian Church is depicted here as an assembly of children and lowly, humble people, who are unable to do anything of themselves, know and can do nothing but what the father commands them to do. Thus also is Christ the head. He knows nothing else to advise or to do, than what he hears from his Father. As often, therefore, as I see Christians and children who are baptized, so often do I see Christ. A man can realize heaven and be blest in his own child, not because it is his own natural child, but because it is baptized and is a Christian child or a Christian man.

6 But whoso shall offend one of these little ones which believe in me, it were better for him that a millstone were hanged about his neck, and that he were drowned in the depth of the sea.

Whoso shall offend one of these little ones. The other part is that we should not only cheerfully serve the young, (verses 5 and 10,) but we should also not offend them, either by words or deeds, in order that they may not become carnal, ill-bred, dissolute people; as will soon be the case, unless they are restrained by diligent discipline. For we see this by experience, that youth is like tinder, which very easily seizes upon what is bad and offensive; they adopt it much sooner, and retain it much longer, than the Lord’s Prayer. Therefore we should be very careful with the young people, as even the heathen have said, “One should be most ashamed before the young people.”

What a great sin it is to offend such little ones, is sufficiently shown by the punishment threatened. God has created no greater bodily punishment for murder, than that the life of the murderers should also be taken.

Yet the Lord speaks here not especially of the gross offense, which is called a bad example, but of the real offense, in which the simple people are deceived and led away from Christ, the only true way of salvation, and are confused by false doctrine and bad example, which are contrary to God and his word, and this under a semblance and cover of his name.

And when the devil intends to bring about an offense against the true faith, he does it especially through the best, wisest, most holy and learned men (as St. Gregory with his purgatory, St. Francis, Benedict, Dominic, with their new rules of interpretation, etc.)

7 If Woe unto the world because of of fences! for it must needs be that offences come; but woe to that man by whom the offence cometh!

Woe unto the world. Reason judges and condemns the other sins, such as theft, for example. But this gilded sin reason regards not otherwise than pure holiness; she cannot judge it to be wrong; therefore we must wait till God takes the judgment and the sword into his own hand.

World, denotes the best men in the world, such as the most learned bishops, the greatest and wisest rulers, etc. But how does it come, that the people are so easily deceived? The reason is this: That Christians are children, (verse 3.) Just as a child is deceived and led away by a beggar with a piece of bread, so simple Christians are very soon deceived by heretics with the semblance of the divine name. But Christians are not excusable for this. For Christians should indeed be child-like, but in Christ, not out of Christ. In order that we may not be surprised at these offenses, he foretold them here and in chapter 7:15; 24:4f.; 11:23ff.

If thy right hand offend, etc. Here we must not literally understand the bodily members, the eyes, the feet and the hands, when Christ says, It is better for thee to enter into heaven with one eye, with one foot. For it is clear, that in the future life we shall not be blind, deaf, lame or cripples. The Lord speaks here much more allegorically, and “eye” de notes in the Scripture the one who teaches or preaches, and who shall lead and guide others as a preacher, master or bishop. “Hand” means every good friend, who protects, nourishes and helps another. The “feet” are the members that carry the body, or those that are under us, as subjects, people or common men. Therefore, if thou wouldst remain a Christian, do not let anyone with whom thou art daily associated influence thee to do wrong, whether it be father or mother, master or mistress, prince or emperor, brother or sister.

10 Take heed that ye despise not one of these little ones; for I say unto you, That in heaven their angels do always behold the face of my Father which is in heaven.

Despise not one of these little ones. This text has been interpreted in two ways: First, That when Christ speaks of the little ones, he means the humble ones, such as are Christians who believe on him. It is certainly true that all believers are humble. But we will hold on to the simple meaning, as the words clearly imply, that he means expressly little children. Here the Lord looks to Baptism and commends it, in that the child through it has become believing. For he speaks plainly of “these little ones which believe in me.” (Verse 6.) It was indeed a very little child that stood among the disciples, yet because it was circumcised and had come into the number of the elect, the Lord said it believed.

For their angels, etc. He will say, The Lord God takes a very deep interest in children and believers. He loves them so dearly, that he protects every one of them, not with guns and spears, but he gives them great lords and princes, who wait upon them as their dear angels. It would have been entirely sufficient, if he had said, They have their own angels. But he extols it still higher, when he says, “Their angels do always be hold the face of my Father in heaven.” He will say, Learn that while these exalted spirits serve them so heartily, and always stand before the eyes of God, hear and see him, ye shall also do likewise, who are far, far beneath them, and that ye do not offend these little ones at all, but wait upon them and cheerfully serve them.

11 For the Son of man is come to save that which was lost.

Come to save that which was lost. Here the Lord touches upon another reason why he is so angry with those who despise and deceive his Christians and baptized children. The meaning is, That which I have by Baptism scarcely brought to myself, and have bought with so high a price as my suffering and death, that they corrupt and destroy.