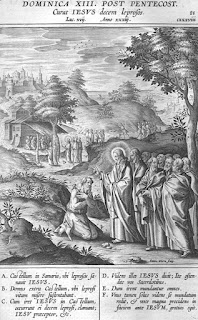 11 Now it happened as He went to Jerusalem that He passed through the midst of Samaria and Galilee. 12 Then as He entered a certain village, there met Him ten men who were lepers, who stood afar off. 13 And they lifted up their voices and said, “Jesus, Master, have mercy on us!”

14 So when He saw them, He said to them, “Go, show yourselves to the priests.” And so it was that as they went, they were cleansed.

15 And one of them, when he saw that he was healed, returned, and with a loud voice glorified God, 16 and fell down on his face at His feet, giving Him thanks. And he was a Samaritan.

17 So Jesus answered and said, “Were there not ten cleansed? But where are the nine? 18 Were there not any found who returned to give glory to God except this foreigner?” 19 And He said to him, “Arise, go your way. Your faith has made you well.”

The ten lepers. Just as simple as this story is, so great is the example presented to us therein. In the leper it teaches us faith; in Christ it teaches us love. The ways and order of Christ’s journeys. St. Luke, more than the other Evangelists, has given us not only the works and teachings of Christ, as the others did, but describes also the order and ways of his journeys.

Christ’ s journey to Jerusalem. After the Lord had preached all around in the land of Galilee, he arose and journeyed toward Jerusalem; which journey he describes from Chapter 9:51 to the end; for this journey is his last one, and is concluded at the end of the Gospel in the last year of his life.

They lifted up their voice. With these words the Evangelist wishes to indicate the great earnestness of their desires, and that the voice of their hearts was great, which compelled them to cry bodily also. For good resons St. Luke mentions three things about them. First, that they “met him;” second, That they “stood;” and third, That they “lifted up their voice.” The running to meet him indicates the boldness which actuated the comforting trust. The standing indicates the firmness and sincerity against doubt. The crying indicates the great earnestness in asking, which grows out of such expectation.

But whence had they the knowledge of his goodness? Doubtless from the word. The third kind of faith is that which puts forth no claim to merit; they say, “Have mercy on us.” He that seeks mercy, seeks grace only, of which he is unworthy. “They stood afar off,” and thought themselves unworthy of such grace.

Show yourselves unto the priests. He does not say, Yes, I will have mercy on you, ye shall be clean; but simply “Go, show yourselves unto the priests.” As if he would say, There is no petition required; your faith has obtained it already before you began to pray; you were already cleansed before me, when you began to expect it from me. Behold, so mighty is faith to obtain from God what it desires, which is thought by God, and done before it was asked. Isaiah 65:24.

In this example Christ teaches us how to love. In the first place, what need had he to enter into this village? Who gave him anything for doing so? Secondly, see how much good he does to some, without loss to others; yea, even by preventing loss to others; not like some, who give alms from unjust money. He directs the lepers to the priests, in order that they may lose none of their rights, although he was under no obligation to do so. Thirdly, he shows a still greater love, in that he exercises it where it is lost, and is mainly rewarded with ingratitude.

On this passage and also on Matthew 8:4, the papists falsely base their secret or private confession, and with great and palpable lies teach that the priests are they themselves; the leprosy, all sins; the showing of the lepers, private confession; the lepers, all men; the sacrifice, the shrove-money. But this figurative priesthood of the Old Testament is now passed away. How then can they claim that they alone are the priests of the New Testament, contrary to 1 Peter 2:9?

In the second place, Christ did not command the lepers to confess their sins, but simply to show themselves to the priests (not only one priest.) The papists construe the leprosy spiritually, but the showing to the priests, they do not construe spiritually. They also maintain that the confession embraces all men, but those who suffered with other diseases, which also signify sins, and who were healed by Christ, were not sent to the priests. Mark 5:43; 7:46.

As they went they were cleansed. The faith and trust of the heart in God is a very tender and sensitive thing, which may easily be injured, so that it begins to tremble and shake, when it is not diligently exercised and becomes habitual. See 1 Peter 4:18; 1 Cor. 8:12.

Thus we see here, when the lepers had begun to believe, he extended their faith farther; he did not heal them immediately. Behold, this is the right kind of growth in faith. Such trial continues during our lives, therefore our growth must also continue as long.

One returned to Jesus. Here the Gospel teaches what kind of works the tried faith performs, and what the right service and honor of God is, that we shall pay to God; namely, love and praise. Psalm 80:13-15, 23.

The lofty praise of God embraces two parts. The first is to esteem him highly in the heart, (1 Peter 2:3; Psalm 34:9) the second is to break out in thanksgiving with the voice.

And he was a Samaritan. Thereby the Evangelist opens our eyes and warns us that God has two kinds of people who serve him. The one kind are those who have the appear ance of great spiritual holiness and make a great ado about it, and yet there is nothing in it; the other kind are those who are destitute of all appearance and name.
Luther’s Explanatory Notes on the Gospels, pp. 241-243.