Luke 18:9-14
The Pharisee and the Tax-Collector 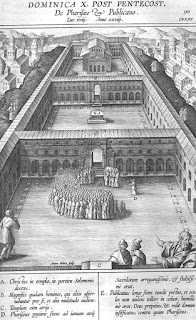 9 Also He spoke this parable to some who trusted in themselves that they were righteous, and despised others: 10 “Two men went up to the temple to pray, one a Pharisee and the other a tax collector. 11 The Pharisee stood and prayed thus with himself, ‘God, I thank You that I am not like other men—extortioners, unjust, adulterers, or even as this tax collector. 12 I fast twice a week; I give tithes of all that I possess.’ 13 And the tax collector, standing afar off, would not so much as raise his eyes to heaven, but beat his breast, saying, ‘God, be merciful to me a sinner!’ 14 I tell you, this man went down to his house justified rather than the other; for everyone who exalts himself will be humbled, and he who humbles himself will be exalted.”

The Pharisee and the publican. Two kinds of righteousness are portrayed to us in this gospel, which are found among men on earth: The one has a great semblance before the eyes of men of the world; yet it is nothing before God and is condemned by him. The other, though not recognized by men, yet is regarded as righteous before God, and pleasing to him. The one is the righteousness of the beautiful, proud saint, the Pharisee; the other, that of the humble sinner, the publican.

The Pharisee’s prayer. The Pharisee begins with the highest and first commandment. He appears as one who worships the only true God, and seeks above all things to do his will. He confesses that he has received everything that he has and is, yea even his life, from God; recites it before him and thanks him for it all. The Pharisee’s words, “God, I thank thee, that I am not as other men are, extortioners, unjust, adulterers,” etc., a pious man may very well use in his prayer, and should also speak them (even against the devil) for no one should be such a liar, as not to be conscious that he is no robber, or adulterer, but must tell the truth, and not permit the praise of a good conscience to be taken from him. Here you see the beautiful works of the first table and of all the three commandments, for herewith he also keeps the Sabbath, because he goes into the temple. Then he passes over into the second table, and purifies his conscience before God and the world, and embraces the other five commandments. Now, what lacks this pious man yet? Nothing, but that he does not know his own heart. Here he forgets God’s mercy, meekness and love; for God is nothing else than pure mercy, and he who does not see this, acts as if there were no God. Psalm 14:1.

Further, after having blasphemed God, and lied to him, in that he does not regard himself a sinner, he falls and sins also against the love due to his neighbor, when he says, “Even as this publican.”

The publican’s prayer. Here there is truly nothing but sin and condemnation. Thus the publican can despise no man, nor exalt himself, for he feels his own condemnation most deeply and regards all others more blessed and pious, and especially this Pharisee.

God be merciful to me a sinner. That he can connect sin and grace is owing to the preaching of the blessed gospel. God’s judgment and the judgment of the world are different, for he alone is merciful to the poor sinner. Yet here again we must discriminate, as to which belong to his judgment and which to his grace. For there are some gross and bold sinners, who continue to live without concern as though they had nothing to fear. To these the following scriptures are applicable: 1 Cor. 6:9; Luke 13:3.

Then there are also other sinners who wish to imitate this publican, and can also smite upon their breast and demean themselves by words and actions, as though they were humble, and yet it is all falsehood and deceit. When one touches and reproves them they will not listen to it.

These two kinds of factions can only too well rhyme both these things: “I am a sinner, and God is gracious unto me.” But to the third party, who means to speak honestly, it is the most difficult thing. For against this they have two great hindrances in themselves. On the one hand, there is yet too much of the old knave of the Pharisee in us. On the other hand, when the publican must come before God with sin and shame, his own bashfulness and all human wisdom hinder much more; yea, the devil himself seeks to bring men into distress and despair by the law of God which he quotes, where he should not, in order to cause distress and despair.

Therefore it is an art above human arts; yea, the most wonderful thing on earth, that a man should have the grace to recognize himself truly as a sinner, and yet disregard the wrath of God, and expect nothing but mercy.

Justified, rather than the other. That is, the former, the Pharisee, did not go away justified, but condemned.

How is this? Answer: Here is another and higher tribunal than the world, or blood, or flesh understands, which sees deeper into the hearts of both, and finds in the Pharisee a very great evil, which spoils everything. For he sins against the commandments of both tables; in the first commandment the presumption is expressly prohibited, that a man should rely on himself or his gifts, or find satisfaction in himself. See how he transgresses also against the other table and rages at his neighbor; for here there is not the least Christian love and charity; yea, what is the worst of all, he is glad, and of good cheer, that his neighbor is a sinner and under God’s wrath.

Thus we attribute salvation to faith as the captain, and to works as the witness. This is why St. Luke and St. James speak so much of works. Faith makes men entirely new.

Every one that exalteth himself, etc. As if he would say: When I find such saints, who leave it to my decision, — the less they esteem themselves, the more I will give to them. But on the contrary, whoever has something and on that account be comes proud and wants to be highly esteemed, from him I will take one thing after the other, till at last I cast him into the abyss of perdition.