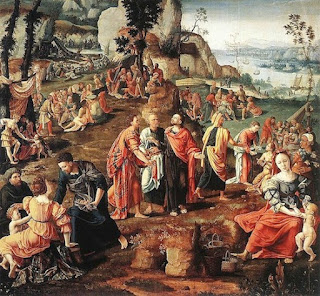 8 In those days, the multitude being very great and having nothing to eat, Jesus called His disciples to Him and said to them, 2 “I have compassion on the multitude, because they have now continued with Me three days and have nothing to eat. 3 And if I send them away hungry to their own houses, they will faint on the way; for some of them have come from afar.”

4 Then His disciples answered Him, “How can one satisfy these people with bread here in the wilderness?”

5 He asked them, “How many loaves do you have?”

6 So He commanded the multitude to sit down on the ground. And He took the seven loaves and gave thanks, broke them and gave them to His disciples to set before them; and they set them before the multitude. 7 They also had a few small fish; and having blessed them, He said to set them also before them. 8 So they ate and were filled, and they took up seven large baskets of leftover fragments. 9 Now those who had eaten were about four thousand. And He sent them away,

The second miracle of the loaves and fishes. This is the second time our dear Lord Jesus performed this miracle. For on the Sunday Laetare we heard that he fed five thousand men, besides women and children, with five loaves and two fishes, and twelve baskets full remained over. (Mark 6:31- 44) But in this gospel we hear that he fed four thousand people with seven loaves and a few fishes, and seven baskets full remained over.

He gives us this miracle twice for our instruction and comfort against the temptation of care for the body and temporal nourishment and support of the church on earth. We see here two kinds of comfort; namely, that our dear Lord Christ will nourish both the soul with the word and the body with bread. But the Lord proceeds with such blessings according to the rule which he has laid down in Matt. 6:33: “Seek ye first the king- domof God,” etc. For the Evangelist mentions how the people had.

Fasted three days, whilst they remained with the Lord. But what think you that they did with or sought from him? Doubtless nothing else than the word of God which they desired to hear. This is accordingly often the reason why he has compassion on them, and thinks he must take care that they get something to eat and do not faint by the way.

Jesus did it of his own good will. Now tell me, if the people had sent a message to Jesus and had pointed out their need to him, could they have obtained relief as well as he himself bethought it? Behold, he bethought it all himself, before anyone spoke to him, and he himself indited the prayer which they might have formed in their heart; and no one could have entertained it in his heart so well as he did.

Compassion on the multitude. Such counselling and conversation with the disciples is held in the first place, in order that his heart and his thought might become manifest; for it must not be concealed, that he has compassion on the people and cares for them, but it must come to light, in order that we may learn to believe that we also have the same Christ. Another reason is this, that everyone may realize that reason and faith can in no wise co-operate. For in verse 4 we see what counsel men could give, if they were the counsellors of God and Christ.

And he asked them, How many loaves have ye? If God should not act otherwise than according to our thoughts and counsel, he would never be able to accomplish any divine work; yet he still shows himself so friendly that he asks for their advice, lets them speak on the subject, has patience with them, and permits them to go on, so that at last they see their folly themselves, and feel ashamed of their unbelief, when they experience and behold with their own eyes his wondrous works.

But when Christ asks how many loaves they have, and takes them, together with the five fishes, thanks God, pronounces a blessing and gives them to the disciples to distribute among the people; then he teaches us first. That we shall accept what God bestows, and use it with thanks, how ever little it may be, and know that Christ will also bless it.

Secondly, By Christ’s command to the disciples, to set the bread before the people, he indicates that he will nevertheless perform his work and bestow his gifts through the medium and service of men; and those who have an office and commission (especially the office of the ministry,) and are set over others, are told that in obedience to Christ therein they should diligently and faithfully serve the people. For he shows hereby how he gives and will bestow his rich blessing upon it, in order that such office and service may do much good and bear much fruit

All did eat and were filled. God supplies the wants of the poor people, which they suffer, though they may have only a piece of dry bread and a drink of water; so that they are still healthy, joyous and of good cheer.

Seven baskets. This last part we should also mark well, which teaches that the fragments that are left shall be gathered up. For it is his will that we shall not unnecessarily waste God’s gifts, but be considerate as to the use and necessity for the future.

About four thousand had eaten. He shows in this example that he is a rich, powerful lord and provider; yea, himself a richer miller and baker than anyone on earth, who has learned his trade well. We see him daily doing the same thing in the whole world. We, indeed, are accustomed to see the corn annually growing out of the ground, and are so blinded by this experience, that we do not heed such a work. For what we daily see and hear, we do not regard as a miracle; and yet it is as great; yea, if we rightly speak of it, a still greater miracle, that he gives us the corn from sand and stone, (Deut. 32:13) than the feeding of the multitude with seven loaves of bread.

But you say, How does it happen, that while he is such a king, who so richly feeds the whole world, that so often he permits his Christians to suffer want and poverty in the world? Answer: Herewith he will show us, First, That his kingdom on earth is not a worldly kingdom, which consists in eating and drinking and keeping house on earth, but that it is a spiritual kingdom, wherein we shall seek and find divine and eternal goods. Secondly, He will teach his Christians to exercise faith in this part also. They shall know that he always manifests such miracles in his Christendom, that they must never theless have enough to eat and to drink, although the world denies or begrudges it to them.