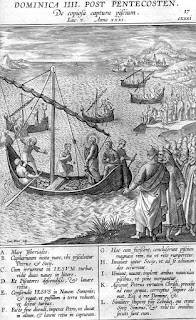 5 So it was, as the multitude pressed about Him to hear the word of God, that He stood by the Lake of Gennesaret, 2 and saw two boats standing by the lake; but the fishermen had gone from them and were washing their nets. 3 Then He got into one of the boats, which was Simon’s, and asked him to put out a little from the land. And He sat down and taught the multitudes from the boat.

4 When He had stopped speaking, He said to Simon, “Launch out into the deep and let down your nets for a catch.”

5 But Simon answered and said to Him, “Master, we have toiled all night and caught nothing; nevertheless at Your word I will let down the net.” 6 And when they had done this, they caught a great number of fish, and their net was breaking. 7 So they signaled to their partners in the other boat to come and help them. And they came and filled both the boats, so that they began to sink. 8 When Simon Peter saw it, he fell down at Jesus’ knees, saying, “Depart from me, for I am a sinful man, O Lord!”

9 For he and all who were with him were astonished at the catch of fish which they had taken; 10 and so also were James and John, the sons of Zebedee, who were partners with Simon. And Jesus said to Simon, “Do not be afraid. From now on you will catch men.” 11 So when they had brought their boats to land, they forsook all and followed Him.

The miraculous draught of fishes. By such an abundant draught of fishes the Lord intended to show his apostles that the gospel is to be extended over the world with energy, and to recapture men out of the kingdom of the devil and bring them into the kingdom of God (vs. 10, 11.) At the same time this gospel lays before us two things, whereby it admonishes us to believe, and strengthens our faith; namely, the faith in temporal goods, (vs. 4-7,) and then the faith in eternal good. Verses 8-10; 1 Tim. 4:8.

Christ preaching. Everything proceeds in a simple way. There is a sea, and the Lord Christ preaches from the ship or boat on the sea; the people stand on the shore and listen to him. The people are praised be cause they listen so cheerfully to the word of God. Whoever has God’s word and listens attentively to it has a great advantage.

First, from the word of God one learns to know the will of God, how he is disposed toward us, and what he will do for us in the life to come.

Secondly, We learn from the word how our outward life, position and manner, delineated in the word, and sanctified by the word, is a true ser vice of God, and pleasing in his sight.

Launch out into the deep. Though God is near to us, and willing to sup ply our wants, yet he will have two things from us; namely, work and hope; though he delayed a little, yet he here directs Peter to make a draught for fishes; and says: “Launch out into the deep;” as if he would say, Cast in your net, do the works which pertain to a fisherman, and leave the result to me. I will not commit the care, but the work to you.

But we must also hope; he lets them toil the whole night and catch nothing, in order that everyone may learn that labor and trouble, however great and willingly performed they may be, never nourish a man, but God’s blessing and grace do. (Ps. 127:2.) The best advice will be, provided you will let a plain, simple man, namely, our Lord Christ, give the world a good counsel, (who, indeed, has had some experience and understands something about government) that everyone in his office and station should direct his thoughts and purposes simply to this end, that he will honestly attend to and perform in faith what has been commanded him; and not depend upon his own purposes and thoughts, but entrust the care to God. Then he will finally discover who works and accomplishes more, he who trusts in God, or he who seeks to accomplish his purpose by his own wisdom, thoughts, power and might. The same is true also in the spiritual government of the church. See 1 Cor. 3:6-7.

At thy word I will let down the net. Here we see a specially great virtue in Peter; he must have had a pious heart, that he could so finely control himself, and stand so firmly by the word when he says, “Nevertheless at thy word I will let down the net.” For here, as elsewhere, our Lord God manages his commands and work very foolishly (as reason regards it.) Otherwise there is an idea in regard to fishing, that not many are caught at noon, but the night is more favorable. Fishermen, also, are not accustomed to go out far into the sea, but remain near the land, where there are more fish, as the fishermen well know. Here the Lord reverses this order, and directs Peter to launch out “into the deep;” that is, to proceed far out into the sea.

They inclosed a great multitude of fishes. Christ confirms the faith of temporal and bodily help, in that he bestows so great a draught of fishes upon Peter. But he observes herein this order and rule, which he himself has given, (Matt. 6:33) “Seek ye first the kingdom of God and his righteousness; and all these things shall be added unto you.” Accord ing to this Scripture he proceeds and proves the example and experience of it; whereby he also wishes to com fort his church and people, that he will care for them, though they may be everywhere persecuted and driven away. (Ps. 34:11; 33:18.) When they had despaired of human counsel, consolation and power, then he comes with his help.

Here let us count up what good things faith brings and accomplishes. For above this, that the believer has God’s grace and blessing, he has also the promise that he shall have enough for his necessity, causing him a good, quiet, joyful heart; wherefore faith may indeed be called the root of all goodness. There is no lack in good things, there is a lack only in faith; sooner must the angels come and give. To this we must first come, that we may be able to confide our stomachs to the Lord; yet thereby we also must learn that we can confide our souls to God. The Evangelist teaches this.

Peter fell down at Jesus’ knees. This is the other part of this gospel; namely, the exalted teaching of spir itual distress and struggle of con science, and the true consolation in it.

I am a sinful man. Here Peter is to become a different man, and a greater miracle is to be wrought in him than the draught of fishes, and the sermon which Christ preached on the ship now begins to work in him.

Here it happens to him just as it did before, that he must first realize his spiritual hunger and need; that is, fall into terror and anxiety of conscience, before he obtains forgiveness and consolation, so that both his ship and the world become too narrow for him, and he knows not where to stand before Christ, whom, however, he has not found terrible, but helpful. With this temptation and terror those have always had to contend, who have received the comfort and grace of Christ by faith. For the goodness and mercy are so exceedingly great, and our heart also is much too narrow and weak, that in the feeling of our unworthiness of such great goodness and mercy, it should be able to grasp or comprehend them, but much rather is filled with amazement. Therefore God has also shown us the mercy to veil and cover all this over in a simple word and under our weakness.

All of God’s benefits, (where they affect the heart) are such living exhortations to repentance, lead men to the knowledge of their sins and cause them to be alarmed. (Rom. 2:4.) It is all a sermon of the law, which preaches about our sins and the wrath of God, no matter when or where it is done. Yea, what an ear nest, terrible announcement and preaching of God’s wrath on account of our sins is the suffering and death of Christ. Peter understands in his heart only the law, but the grace of God he does not yet understand, when he says, “I am a sinful man.” That is very well; but this is not right, that he tells Christ to depart from him. Above in verse 5, he forgets what he is, and says, Lord I am a fisherman, and understand my business; yet I will drop the profession and let down the net according to thy word. Thus he should also do here and say, Lord, I am a sinner, and not worthy that thou shouldst be near me; yet now I look not upon my sins, but at thy word I will risk it and re main with thee. Christ, however, does not leave Peter in such despair, but says:

Fear not, Peter, from henceforth thou shalt catch men. That is, thou shalt not only have a gracious God, but thou shalt also help others to obtain what thou hast obtained.

This is a special comfort against temptation which all pious preachers have, who apprehend that the world is too bad, preaching is useless and vain, and none will be converted. Such, Christ will say, one might fear from the Moses preaching; but where my word goes, and where I bid it to be preached, there it must prevail, as here with the draught of fishes which Peter caught at my bidding.

Henceforth thou shalt catch men. With these words Christ himself has shown the interpretation of Peter’s draught of fishes; for therein is prefigured the spiritual rule of the church, embraced in the office of the ministry. The sea, or the water, is the world, the fishes are men, the hands and the net by which the fishes are drawn is the outward office of the ministry. Although the office of the ministry, like the net, must suffer, in that it goes into the water and gets wet, so the ministerial office must suffer all kinds of temptations and persecutions from the world; the net also gets torn and cannot be useful and fruitful to all men; yet a strong power and abundant fruit reward those who continue in the use of it.
Luther’s Explanatory Notes on the Gospels, pp. 204-207.