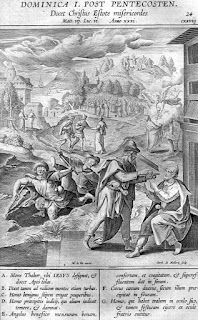 36 Therefore be merciful, just as your Father also is merciful.

36 Be ye therefore merciful, as your Father also is merciful.

Merciful is such a man, who is friendly, willing and helpful to others. This the Gentiles may do also. But this they do not add, that we should do good also to our enemies, which part Christ touches upon when he says: ” As your Father is also merci ful;” he does good to the whole world. The Gentiles can be kind, friendly and helpful as long as they know that they shall be helped again, (verses 32-34. ) But when there is no return of favors, then kindness and goodness also dry up. Here we see openly that it is not a fountain of living waters of love, but only water poured on the sand; this is a heathen help. But a Christian shall have such a fountain that is inexhaustible and will not dry up, though the benefits be poured upon the sand like water.

39 And he spake a parable unto them; Can the blind lead the blind? shall they not both fall into the ditch? 40 The disciple is not above his master: but every one that is perfect shall be as his master.

The blind leading the blind. As if the Lord meant to say, You think your brother is blind and want to reprove him; that is, you want to lead another and are blind yourself. You regard him as a sinner, and think that you are pious. What else is this, than that your heart is so disposed, that you think yourself better than he is, which is nothing else than that you wish to lead others, while you your self are blind, and whoever follows you must fall into the ditch. Of such followers Paul also speaks in Rom. 2:17-23 and 1:3.

Therefore the Lord says: “The disciple is not above his master; but every one that is perfect shall be as his master.” This is a common proverb. I can learn no more of my master than he knows. Why does the Lord speak this proverb? On account of two kinds of masters. The first one is blind; if I follow this one I become blind also; if he falls into the ditch I will also fall in after him. The other Master is the merci ful Father, of whom we shall learn mercy; in following him we also become merciful, as he is merciful; and if we were always merciful, we should be perfect as he also is perfect; but this does not come to pass as long as we are in this life.

1 Judge not, that ye be not judged.

Judge not. Here the Lord begins to warn against something else, which is also a great, shameful vice ; it is self-conceit, which judges and criticises everybody, will not listen to any one, or learn anything of another.

The Lord does not here speak of the decisions of the earthly judge; for God has appointed the earthly sword for the punishment of open transgressors.

While I and other preachers are in office we do right; yea, we do a work of mercy to the people, (whoever may do us good or evil therefor) when we reprove them for their wickedness. See Luke 24:47; John 16:8.

But by judging, or condemning, the Lord means here, when one is pleased only with his own conduct, and that of the other is made odious.

The one kind of judging relates to the doctrine, the other to the life. By his judging, a man gets into two kinds of perplexity; namely, first, that he despises his previous life and forgets what he has been, and does not reflect how it would have distressed him if one had despised and condemned him.

Look into thine own heart, and by thine own strength bear thy brother’s weakness.

But if you see that he acts too dis orderly and will not desist, then re prove him ; go to him and tell him his fault, between thee and himself alone. Matt. 18:15.

2 For with what judgment ye judge, ye shall be judged: and with what measure ye mete, it shall be measured to you again.

With what judgment ye judge, etc. As we say in the common proverb: The liberal hand has never failed. (Milder Hand noch nie gebrach.)

This is a wonderful sermon, in which we see that God cares almost more for our service to our neighbor, than for his own service.

With what measure ye mete. We must understand the measure here after faith, and not before faith, for before thou didst come to faith God did not deal with thee according to thy desert, but according to grace.

3 And why beholdest thou the mote that is in thy brother’s eye, but considerest not the beam that is in thine own eye?

The mote in thy brother’s eye. It usually happens, that those who are the greatest adulterers according to the flesh, are they who judge and condemn the others; yea, they judge not only men, but God himself.

4 Or how wilt thou say to thy brother, Let me pull out the mote out of thine eye, and, behold, a beam is in thine own eye?

The beam in thine own eye. How great soever our sins may be, he can forgive them all, as he shows, when he calls the sins of the neighbor a mote.

But this is the most shameful addition and filth that corrupts all; namely, that thou judgest and condemnest another on account of his faults, and goest on and wilt not see the beam, and regardest thyself with out sin. All other sin is nothing, when thou comparest it with thy judging.

5 Thou hypocrite, first cast out the beam out of thine own eye; and then shalt thou see clearly to cast out the mote out of thy brother’s eye.

First cast out the beam. First reform the great rogue in thine own bosom, and then see to it, that the small rogue is also reformed. But thou wilt be astonished to see how much thou wilt daily have to do with the great rogue.