In the Holy Gospel for today we encounter people expressing a couple of different opinions about Jesus. One is a temporary misunderstanding about him. The other is a hardened rejection of Jesus. Both opinions are negative.

Now by extension what people think about Jesus will also shape what they think about his followers. And so today as we see people expressing these negative views about Christ, realize that people will have similar negative views about his Christians. And we need to be prepared for this. People will say this stuff about us. But at the same time, there is another opinion about Jesus’ followers that we will discover in our text. Now the question for us is, whose opinion do we put more stock in? Whose view do we pay more attention to? It makes a difference. So our theme this morning: “Different Opinions about Jesus–and His Followers.”

The first opinion about Jesus that we find in our text is that of his own family members. Now you would think that Jesus’ own family members would be so proud of him, as he goes about blessing people and healing their diseases and so on. “That’s our boy!” you would think they would say. But no. Here’s what it says: “Then [Jesus] went home, and the crowd gathered again, so that they could not even eat. And when his family heard it, they went out to seize him, for they were saying, ‘He is out of his mind.’”

“He’s out of his mind,” they say. His own family. They think he’s gone crazy. Jesus is so busy teaching the Word of God and healing diseases and delivering people from demons and forgiving sins–he’s so busy doing all this stuff, he doesn’t even have time to eat. So the family thinks he’s lost his mind. He’s gone over the edge. They’re thinking, “You’re acting like a crazy person!”

Well, what do you think? Do you think Jesus is out of his mind for taking all this time to do all these things? I mean, he’s missing meals, for goodness sakes! A normal person doesn’t do that. Calm down, Jesus! Slow down. Take it easy. Think of yourself. Don’t go overboard on this religion business. That’s what a lot of people today would say, isn’t it? Well, they were saying that back then, too. “He’s out of his mind.”

But is he? Or is he really in his right mind, and it’s others who do not get it? I think that’s the case. That’s certainly the viewpoint of the Bible. Jesus’ mindset is the right one. Jesus came to do the will of God. He had in mind the things of God, not the things of men. Man’s mindset is to serve oneself, to look out for #1, to have your best life now. But Jesus said he came not to be served, but to serve and to give his life as a ransom for many. He humbled himself and became obedient unto death, even death on a cross–knowing that that is what it would take to accomplish the mission on which he was sent, to redeem sinful mankind and to usher in the kingdom of God. And that meant bestowing the blessings of the kingdom even early on in his ministry–preaching, teaching, healing, casting out demons, forgiving sins–the very things he is busy doing in our text for today. Oh, I’d say Jesus is in his right mind, very much so!

But his family members don’t get that, at least not yet. We read elsewhere that his own brothers did not believe in him at this time. Of course, that would change later on. Jesus’ brothers would believe in him, come to faith. In fact, a couple of them became prominent leaders in the early church, James and Jude did. But not yet. At this time they are still operating with the mindset of the world, and so they think Jesus is acting a bit balmy in the head.

Now by extension, if people think this way about Jesus, it’s likely they will think similar thoughts about Jesus’ followers. And that continues to this day. Maybe you’ve experienced some of this. Maybe even from members of your own family. Have people ever thought you’re a bit crazy for spending so much time at church? Do they think you’ve gone a little overboard on religion? Do they look at you a bit funny because you’re not available for other activities on Sunday mornings, or because you don’t your kids participate in sports on Sunday mornings since that time is reserved for God?

See, people today who don’t get it may say the same thing about you as they said about Jesus: “He’s out of his mind.” “She’s way too much into religion.” But see, this is just a way for them to distance themselves from the call of God on their lives. God would call them to repentance and to faith also. But that can make people uncomfortable. And you remind them of that. So they may have some negative opinions about you. Well, get used to it. It comes with the territory. So be it.

So the first opinion we find in our text directed toward Jesus, and which also can apply to his followers, is “He’s out of his mind.” The second opinion about Jesus that is expressed is even more hostile: “He is possessed by Beelzebul,” or, in other words, “He is demon-possessed.” That’s what some of Jesus’ opponents were saying about him. Our text states: “And the scribes who came down from Jerusalem were saying, ‘He is possessed by Beelzebul,’ and ‘by the prince of demons he casts out the demons.’”

These opponents were accusing Jesus of being in league with the devil himself. They are really grasping at straws here. To imagine that Jesus is able to cast out demons by being given power by the devil—as though this is some sort of subtle trickery Jesus is doing in order to deceive people–well, that just doesn’t make any sense on the face of it. And Jesus says so: “How can Satan cast out Satan?” and so on.

No, the truth is, Jesus came to destroy the works of the devil. He came to bind the strong man and to plunder his goods. He came to deliver poor souls from the devil’s oppression and to bring them over into the kingdom of God.

And dear friends, Jesus has delivered you from the domain of darkness and the devil and transferred you, brought you over, into the kingdom of light and life. How has Christ done this? By stomping on the devil’s head, even as Satan struck him in the heel. In other words, by the cross. Those nail-scarred feet bear testimony to the devil’s bite, when Jesus was nailed to the cross. But at the same time, Jesus was delivering the death-blow to the devil’s head, winning our forgiveness and undoing death, precisely by his sacrificial death on our behalf.

When Jesus said, “It is finished,” it really was. The devil’s end, his crushing defeat, was accomplished. The goal had been reached. Satan has no more room to make accusation against you, because your sin has been forgiven by Jesus’ blood. And with sins forgiven, death is undone. The risen Christ holds the keys of death and Hades. Jesus is the stronger man who has bound the strong man, the devil, and plundered his house. Forgiveness, freedom, and final resurrection are yours in Christ. 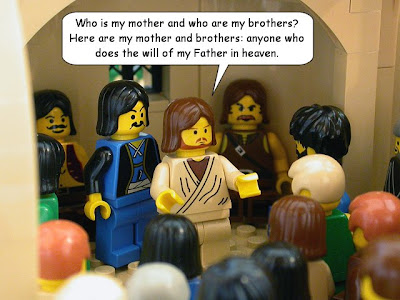 So in spite of these negative evaluations about Jesus, and likewise about his followers, there is one opinion we haven’t considered yet. And that is Jesus’ opinion of those who come to listen to him. We read in our text: “And his mother and his brothers came, and standing outside they sent to him and called him. And a crowd was sitting around him, and they said to him, ‘Your mother and your brothers are outside, seeking you.’ And he answered them, ‘Who are my mother and my brothers?’ And looking about at those who sat around him, he said, ‘Here are my mother and my brothers! For whoever does the will of God, he is my brother and sister and mother.’”

Now it is Jesus’ opinion about his followers–that is the only opinion that counts. That is the one we should pay attention to; that is the one we should put stock in and heed–what Jesus says about us, not what the world says about us. And what Jesus says is this. He says that those people who come to listen to him, to gather around him, to be ministered to by him–Jesus says of us: “Here are my mother and my brothers! For whoever does the will of God, he is my brother and sister and mother.”

It’s like what Jesus said about Mary of Bethany, when she sat at his feet and listened to his gracious words. Jesus said about her, that she had chosen the better part, the one thing needful. Likewise, here in our text, Jesus commends those who gather around him to hear his voice, and he calls them his family, his brothers and sisters.

Yes, Jesus is saying that about you today, dear Christian. About you and me and all of us who are gathered here to receive the gifts Christ has for us and to listen to his voice. That is the will of God for us; that is his good and gracious will: that we come to Jesus to hear and believe and be saved! For he has the words of eternal life.

And so when we do come here and receive from our Savior, Jesus says we are really his true family. He calls us his brothers and sisters. I’d say that’s pretty good. And frankly, I’d put more stock in what Jesus says than in what the world says. Every day of the week, and twice on Sundays.