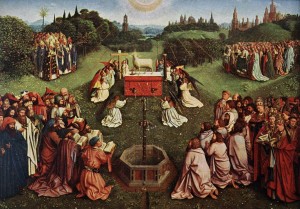 The rallying cry of the Enlightenment is one of personal autonomy; freedom. In the air we breathe, the template of freedom is the operating system directing our endeavors. In the Church, too, there is freedom. The question is, to what end?

Followers of the Radical Reformation are theological heirs of John Calvin and Ulrich Zwingli. They believed freedom from Rome gave them permission to depart from and remove the liturgical rites and practices of the medieval church. This is in marked contrast to Luther’s Reformation known as the Conservative Reformation. The Lutheran Reformers believed freedom from Rome gave them the freedom to keep those liturgical practices of the medieval church which did not promote idolatry. Lutherans kept these received liturgical practices for the sake of good order and teaching the faith.

We do not abolish the Mass, but religiously keep and defend it. Masses are celebrated among us every Lord’s Day and on the other festivals. The Sacrament is offered to those who wish to use it, after they have been examined and absolved. And the usual public ceremonies are observed, the series of lessons, of prayers, vestments, and other such things.[1]

A number of reasons can be cited for retaining the Western liturgy called the Mass once it was cleansed of false teaching. Retaining the historic liturgy helps make the Divine Service kid friendly serving what children need most: repetition which aids memorization. It is also elderly friendly aiding those who are slowly losing their ability to read, adapt, and remember. The Lord Jesus continues to pour his creative gifts upon the church in the form of hymns, etc., but these contributions compliment and do not replace what has been received from those who have gone before emphasizing the catholicity of the faith.

Yes, there could be liturgical divergence from territory to territory, but to use statements of the Formula, which allow freedom, to justify the current state of (non) liturgical disunity and individualism among American Lutherans is unjustified. The authors of the Formula simply did not in any way intend to sanction anything remotely like our current congregationalistic worship situation.[2]

Followers of the Radical Reformation used their newfound freedom to depart from the historic liturgical practice of the Western Church. In marked contrast the Lutheran used their freedom from Rome to keep the historic liturgical practice of the medieval church, i.e., the Western Mass without the false notion that by it we obtain salvation. A potpourri of quotes from the Lutheran Confessions and Luther shows that freedom was used to keep the Western Mass while cleansed of idolatrous practices:

No doubt the liturgy has changed over the centuries. What is of concern is when the identity of the liturgy is changed. When a person no longer worships as a Lutheran, that person slowly no longer believes as a Lutheran. In regards to worship we need to be aware of the axiom coined by Prosper of Aquitaine in the fifth century: “Lex orandi, lex credendi: the rule of worship is the rule of believing.”[9] If a person worships as a Baptist one will believe as a Baptist. If one worships as a Biblical Christian, i.e., a Lutheran, one will be enabled to believe as a Lutheran. Simply put, “Worship practices are manifestations of the doctrine of the church.”[10]

In clarity uncharacteristic of modern day churchmen, C.F.W. Walter said if you do not worship as a Lutheran you will slowly no longer believe as a Lutheran.

Church usages, excepting the case when confession of a divine truth is required, are indeed adiaphora. But they are nevertheless not without an import of their own. Congregations that adopt the church usages of the sects that surround them, will be apt to conform to their doctrines also, more easily and quickly than those that retain their Lutheran ceremonies. We should in Lutheran services, also when held in the English language, as much as possible use the old Lutheran forms, though they be said to be antiquated and not suiting this country.”[11]

Walther was prescient and we do well to heed his words. To worship in non-Lutheran ways makes a person more open to non-Lutheran theology. This insight is so simple as to be considered threatening and inflammatory by those who desire to depart from the use of the historic western liturgy. Affirming what Walther wrote Matthew Harrison states:

Here we note an unpublished study conducted in the early 1990s by Pr. Brian Saunders, formerly of Holy Cross Lutheran in Ft. Wayne. Pr. Saunders surveyed some 300 who regularly attended a “contemporary worship” service at Holy Cross (with rock band, testimonies, “liturgical” dance, etc…). One question asked: If you were to move to another community where there was a church which did not confess the true bodily presence of Christ in the Sacrament, nor baptize babies, but did worship in the way you do now; and there was an LC-MS congregation which used the liturgy/hymnal, which church would you join? 74% said they would opt out of Lutheranism. It has been said that historical-critical theology is merely a way for unbelievers to find haven in the church. I would suggest that much of “contemporary worship” is simply a way for the weak to be robbed of Lutheranism, yet remain within the Lutheran church.[12]

The freedom we have in Christ is not so we can do our own thing. The Lutheran Reformers confessed that freedom means we embrace and keep the liturgical practices of the church catholic but not by force or compulsion of anyone. Freedom’s operating system is a love for the Gospel and Jesus’ blood bought people so that we may serve and edify our neighbor with the Good News of God’s mercy in Christ. I come to a close with words from Martin Luther.

For even though from the viewpoint of faith, the external orders are free and can without scruples be changed by anyone at any time, yet from the viewpoint of love, you are not free to use this liberty, but bound to consider the edification of the common people, as St. Paul says, I Corinthians 14 [:40], “All things should be done to edify,” and I Corinthians 6 [:12], “All things are lawful for me, but not all things are helpful,” and I Corinthians 8 [:1], “Knowledge puffs up, but love builds up.” Think also of what he says there about those who have a knowledge of faith and of freedom, but who do not know how to use it; for they use it not for the edification of the people but for their own vainglory.[13]

[10] Ronald Feuerhahn, Liturgics: Do the Lutherans have a Confessional Stake in the Current Debate?, 7, (Paper presented at the Symposium on Lutheran Liturgy and Hymnody, CTS, Ft. Wayne, January 18, 1995).