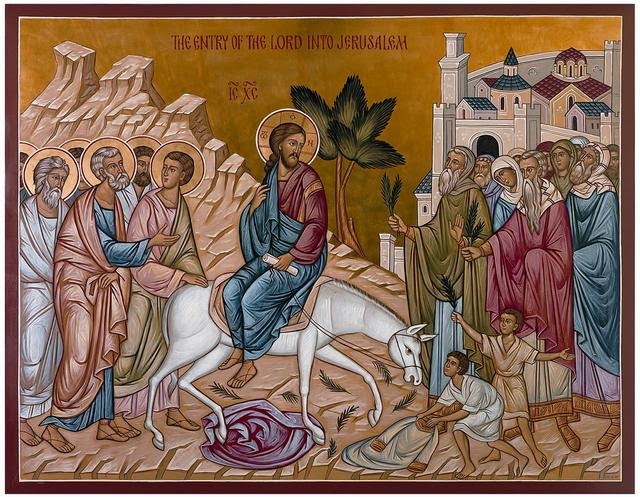 St. Paul sums it up well. Jesus “made Himself nothing, taking the form of a servant, being born in the likeness of men” (Phil. 2:7). You see, the “likeness of men” comes from the “image of God” given to Adam and Eve in the garden. And that likeness and image is to be servants—servants of God and servants of one another; trusting God and loving one another. But that’s what Adam and Eve and all of us lost in that fateful Fall into sin. “Here, let me be ‘like God’…on my own terms…in my way…according to my desires.” And that’s what King Jesus marches on to overcome. So He made Himself nothing.

St. Paul continues: “And being found in human form, He humbled Himself by becoming obedient to the point of death, even death on a cross” (Phil. 2:8). Our Suffering Servant King completely and utterly emptied Himself on that Cross. We just heard St. Matthew tell the story in all its grueling details. So the simplest—and perhaps the best—application for each of us is to hear these words: “For you! All for you!”

But let’s ponder it a bit more. Let’s use our final hymn for today to ponder how Jesus’ emptying of Himself, Jesus’ ride into Jerusalem, and Jesus’ death on a cross changes you and your life.

Ride on, ride on in majesty!
Hark! All the tribes hosanna cry.
O Savior meek, pursue Thy road,
With palms and scattered garments strowed. (LSB 441:1)

He rides in majesty, but this ticker-tape parade will soon give way to jeers and boos and whips and nails. The adoring crowd, though, shouted something life-changing, even if they didn’t realize how life should change. “All the tribes hosanna cry,” we sing. “Hosanna” means “save now.” And that’s exactly what our meek Suffering Servant King does. He doesn’t necessarily save us from occupying armies or corrupt governments. But He does save us from what enslaves us most—our sin and our sins; our inner rottenness and our thoughts, words and deeds that reveal that inner spiritual “cancer.” So “Fear not, daughter of Zion; behold, your king is coming sitting on a donkey’s colt!” This week we get to follow our Lord as He rides on…to die. Don’t miss any of it.

Ride on, ride on in majesty!
In lowly pomp ride on to die.
O Christ, Thy triumphs now begin
O’er captive death and conquered sin. (LSB 441:2)

Ride on, ride on in majesty!
The angel armies of the sky
Look down with sad and wond’ring eyes
To see the approaching sacrifice. (LSB 441:3)

King Jesus is commander-in-chief of “the angel armies of the sky”—Lord God of Sabaoth, Lord God of power and might. All He had to do is nod and those mighty heavenly soldiers would have come to His rescue, eyes blazing, swords swinging, with more shock and awe than we could imagine. But no. They sit. They wait. They watch. From the stands. “Our Commander is sacrificing Himself? He doesn’t want our aide?” What a wonder it must have been. King Jesus, Lord God of Sabaoth, was sacrificing Himself to bring an end to this ages long spiritual conflict. King Jesus, Commander-in-Chief, was surrendering Himself in order to win the war. To end the hostilities. To bring peace between God and people. “Glory to God in the highest, and on earth peace among those with whom He is pleased!” (Lk. 2:14). “Therefore, since we have been justified by faith, we have peace with God through our Lord Jesus Christ…. For if while we were enemies we were reconciled to God by the death of His Son, much more, now that we are reconciled, shall we be saved by His life” (Rom. 5:1, 10). That’s why He rides on—to die.

Ride on, ride on in majesty!
Thy last and fiercest strife is nigh.
The Father on His sapphire throne
Awaits His own anointed Son. (LSB 441:4)

Amazing! God the Father sits and watches too! Since He’s the father from whom all fatherhood is known, and since we know that any human father worth his salt would want to step in and help his suffering son, this is truly amazing. But no. God the Father sits on His sapphire throne. He watches. He waits. His own anointed Son single-handedly engages in this “last and fiercest strife.” His own anointed Son single-handedly bears the full load of sin and death. His own anointed Son single-handedly endures the scorn and the forsakenness. “My God, My God, why have You forsaken Me?” His Son cries out. “Why are You so far from saving Me, from the words of My groaning?” (Ps. 22:1). And the Father just sits there, letting it all happen, without lifting even a finger. But all this was by His eternal will. All was going according to His loving plan. King Jesus was heard because of His reverence (Heb. 5:7). And now we get to draw near God’s throne of grace with confidence. Now we get to receive mercy and find grace to help in time of need (Heb. 4:16). That’s why He rides on to die.

So, His majesty is seen in lowly pomp. His royalty is evident in a crown of thorns. His throne is a bloody cross. His warm stately hands and feet are pierced through with cold metal spikes. He bows His “meek head to mortal pain.” Why? Why go through all that excruciating shame and torture? Why suffer? Why shed innocent blood? Why gasp in agony for six long hours? Why voluntarily give up His spirit? Why? For you. All for you! That you “may be His own and live under Him in His kingdom and serve Him in everlasting righteousness, innocence, and blessedness.”

That’s why He rides on. To die. For you. That you may live. That you may be restored to the “likeness of men” and the “image of God.” That’s what we celebrate this week and into next Sunday. Don’t miss any of it! Amen.

Pr. Asburry’s other homilies for Holy Week and Easter, 2015:

The Resurrection of Our Lord