In 1964, my oldest brother, David, participated in the Sixth National Jamboree of the Boy Scouts of America at Valley Forge. The rest of the family, on our way to the New York World’s Fair, visited him. For a whole day, we were immersed in the sights, activities, and wonders amidst 52,000 Scouts and leaders in that historic setting. Through my 12 year old eyes, it was fantastic.

In 1969, I had the chance to attend the Seventh National Jamboree at Farragut State Park, Idaho, at the site of a WWII U. S. Navy training base on Lake Pend Oreille. My next oldest brother, Richard, had attended the Twelfth World Jamboree there in 1967, and from his stories, photographs, and souvenirs, it seemed fantastic too. Did I want to go to the Jamboree? What kind of question is that? Of course!

A special train carrying only Scouts to Sandpoint, Idaho stopped in my hometown, Williston, North Dakota, where a troop of us embarked. The immersion already had begun, swapping stories, patches, and skills.

Once there, it was not long before we found our troop’s assigned camping spot and pitched our tents. My imagination was full of my memories from five years earlier at Valley Forge, when I’d gotten around so much, saw so much, met so many people, and joined on the spot in so many activities. I had assumed that the Scouts were doing about the same things I was. But there were a couple things wrong with my eyes.

I had seen Valley Forge not only with the eyes of a child, but the eyes of tourist. I was only passing through. For me, it was all fun and games. I had not realized that for the Scouts, it was not all fun and games. I soon learned that as a Scout, not a visitor, a lot of my time was to be spent doing the same things over and again that Scouts always do in every camp. Starting fires, cooking, washing mess kits, policing the area, knots, lashing, first aid, and so on. Yes, we got into a lot of fun stuff too, like log rolling, mountain hiking and climbing, orienteering, and trading. But the repetitive stuff, the regular stuff, commanded a disappointing amount of the time.

Had I known this, would I have been as excited about going to the Jamboree? Truthfully – and I am not proud to say it – but no. I wanted it to be all new and different, like my childish, tourist imagination. If you are going to a Jamboree, you’d better like to make fires, cook over fires, tie knots, lash poles – you’d better like to do what Scouts do over and again, all the time.

We have childish, tourist imaginations about heaven. Ask me the question, “Do you want to go to heaven?” For most of my life, I would have said, what kind of question is that? Of course! Part of that is because, heaven means not hell. But part of it because of fantastic imaginations we have about everything always being new and different, about nothing being regular and repetitive. We assume there is no handful of things we’d better really like to do, or else heaven will be a disappointment, because in heaven we’ll do them over and again forever.

The Bible does give us some nice, fantastic revelations about heaven. It has streets of gold, a sea of glass mixed with fire, a city of precious jewels, strange creatures, and more. But when we read through Revelation, we find out that there are some regular, repeated things going on, and everybody gets caught up in them, over and over.

Strangely, part of this is singing “a new song.” How can it keep being new, when everybody sings it over and over? Doesn’t that get old? Doesn’t that become mundane? Doesn’t the Jamboree have more variety?

The next verse does not make it any better. “And whenever the living creatures give glory and honor and thanks to him who is seated on the throne.” Whenever? You mean this just breaks out spontaneously at any random time over and over again? And every time that happens, the “elders fall down before him who is seated on the throne and worship him who lives for every and ever.”

How can we like the same thing over and again eternally? What is that new song that stays new? It is the song of the blood of Christ given to us for the forgiveness of sins.

They sang a new song, saying,

“Worthy are you to take the scroll
and to open its seals,
for you were slain, and by your blood you ransomed people for God
from every tribe and language and people and nation,
and you have made them a kingdom and priests to our God,
and they shall reign on the earth.”

Then I looked, and I heard around the throne and the living creatures and the elders the voice of many angels, numbering myriads of myriads and thousands of thousands, saying with a loud voice, “Worthy is the Lamb who was slain, to receive power and wealth and wisdom and might and honor and glory and blessing!” And I heard every creature in heaven and on earth and under the earth and in the sea, and all that is in them, saying, “To him who sits on the throne and to the Lamb be blessing and honor and glory and might forever and ever!” And the four living creatures said, “Amen!” and the elders fell down and worshiped.

It doesn’t look like anybody gets out of that activity. Everybody sings the same song over and again. What keeps it new is that the song is about the Lamb of God, slain for sinners, and his blood ransoming sinners from everywhere into his kingdom.

A great multitude that no one could number, from every nation, from all tribes and peoples and languages, standing before the throne and before the Lamb, clothed in white robes, with palm branches in their hands, and crying out with a loud voice, “Salvation belongs to our God who sits on the throne, and to the Lamb!” 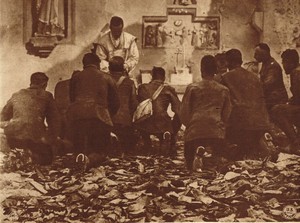 In Chapter 19, “I heard a loud voice of a great multitude in heaven, saying, “Alleluia! Salvation and glory and honor and power belong to the Lord our God!’”

In Farragut State Park one night at the Jamboree, 35,000 of us assembled in a natural outdoor amphitheater to hear Up With People. It was great. I bought the album. Now I don’t know where it is. It was great, but it got old. In heaven, there will be a greater multitude, singing, if I may take a liberty, Up With God. But notice, the glory and honor and power that belong to the Lord our God are spoken after the repetitive, liturgical rehearsal of the salvation that belongs to him.

In the divine service of the historic Lutheran liturgy, our Savior steps through a kind of star gate, if you will, and brings heaven to earth. With his gifts of Word, Baptism, and Communion, He again serves us, as when he got down on his knees with basin, water, and towel to wash Peter’s feet. We sing over and again, the same form of words, liturgically, as we will for ever and ever in heaven. The song always is new because it is the song of the forgiveness of sins. It is the song of the Lamb who takes away the sin of the world, the Lamb slain from before the foundation of the world.

Do we really want to go to heaven? Do we confess sin? Do we believe the Absolution? Do we hunger and thirst for the righteousness of faith? Do we discern the true body and blood of Jesus in the bread and wine? Do the words, “Given and shed for you for the remission of sins,” convince us over and again that with the bread and wine we receive the forgiveness of sins because we receive the blood that was shed for the forgiveness of sins? Do we believe that what Christ once offered to the Father as sacrifice he now offers to us as sacrament?