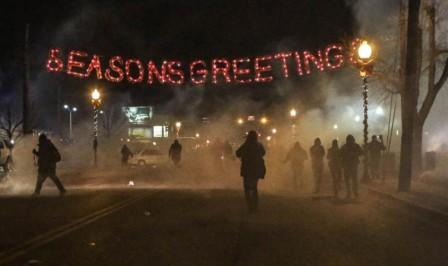 I’m sure many of us were watching on our televisions the other night when we saw what was supposed to be a peaceful protest in Ferguson suddenly and not unexpectedly turn quite unpeaceful. Looters started breaking store windows and stealing what they could get their hands on. Arsonists began to torch buildings and cars and burn them to the ground. Rioters were running wild and not much was being done to stop them.

Or let’s look at it from the other point of view. Suppose you were one who genuinely felt that the police officer should have been indicted and gone to trial. You sincerely believe that justice was not done in this case. You feel that the police do not treat everyone the same. You’re upset about it. And it’s Thanksgiving. And you wonder, “What is there to be thankful for? We’re still being persecuted unfairly.”

Whichever side of this case you find yourself on, this is not a happy week for our greater St. Louis region or for our nation. Unrest has been stirring in many cities across our land. And here we are at Thanksgiving. Indeed, here we are at the Day of National Thanksgiving. This holiday is specifically supposed to be about giving thanks to God for his blessings on our nation. And right now America seems to be at a low point. The economy is not great, race relations are not great, there’s rioting in the streets, Buffalo is digging out of tons of snow, and the polar vortex has arrived early and settled in for what looks to be a long cold winter. Is this anything to be thankful for? Well, today I want to submit to you that, yes, we do have much to be thankful for. Even when we’re having “A Very Ferguson Thanksgiving.”

A nation faced with violence and destruction. Contention and strife dividing the people. The law not being enforced. Justice being perverted. The wicked seem to be winning. No, I’m not talking about America in 2014. I’m talking about the nation of Judah, about 600 B.C. These are the things that the prophet Habakkuk is seeing as he looks out as his land, and he wonders why the Lord God is letting it happen. Habakkuk voices his complaint:

O Lord, how long shall I cry for help,
and you will not hear?
Or cry to you “Violence!”
and you will not save?
Why do you make me see iniquity,
and why do you idly look at wrong?
Destruction and violence are before me;
strife and contention arise.
So the law is paralyzed,
and justice never goes forth.
For the wicked surround the righteous;
so justice goes forth perverted.

But the Lord, instead of saying, “Oh, that’s alright, Habakkuk. I’m going to make everything nice and pleasant right away”–no, instead, the Lord says things are about to get worse. For God is about to bring the Babylonian army to descend on Judah and wreak havoc:

They all come for violence,
all their faces forward.
They gather captives like sand.
At kings they scoff,
and at rulers they laugh.
They laugh at every fortress,
for they pile up earth and take it.
Then they sweep by like the wind and go on,
guilty men, whose own might is their god!

Boy, that sounds like Ferguson the other night! Only what would happen to Judah and Jerusalem would be many times worse.

We’ve talked about the prophet Habakkuk, who was distressed for his nation. We talked about the people distressed by the looting and burning in Ferguson. But maybe you’re having your own private Ferguson. It could be financial setbacks and uncertainty. It could be an injury or illness. Maybe it’s the loss of a spouse, whether through death or divorce. All these things can bring us down and cause us to wonder where God is in all of this. What is it for you? Is it hard for you to give thanks this Thanksgiving?

I want to suggest to you today that, yes, we can. And what we will discover is what the prophet Habakkuk found, namely, that the Lord God is faithful to his promises, faithful to his covenant, that he does care for his people in the midst of distress, and that he has a future in store for us when all the wrongs will be righted, and God will rescue and redeem his people.

What Habakkuk first needed to learn was that, while we may not understand why all the bad things are happening, God does. And God has a purpose for us while we’re going through it. “The righteous shall live by faith”: That’s the answer that Habakkuk learned. The Lord’s promises are true and trustworthy, and we are called to put our faith in those promises, in spite of our circumstances. The Lord is true to his word. He does care for his people. He does see our suffering, and he has done–and he will do–something about it.

For suffering Judahites, for suffering Fergusonians, for suffering saints in Bonne Terre and Potosi, our good and gracious God has indeed done something about the problem of evil. He has fulfilled his promise to send a Savior. This Messiah, this deliverer, would do far more than just get rid of the Babylonians or the Romans. God’s solution and his salvation would be far richer and deeper than that. God would get to the root of the problem, namely, our sin. Not just the sin of the looters and arsonists or of a justice system that may or may not always deliver justice. No, not just the sins of others. But our own sins.

Yes, you and I, if we were brought before God’s Grand Jury, we would surely be indicted–and tried and condemned. Guilty as charged. Take a look at those Ten Commandments. Ten counts of sin before God: Having other gods. Misusing God’s name. Not setting aside God’s Word as holy. Dishonoring authorities established by God. Wishing harm on our neighbor. Not honoring marriage. Stealing, whether by looting or in more subtle ways that don’t make the TV cameras. Speaking ill of our neighbor. Coveting in our heart our neighbor’s goods and our neighbor’s relationships. Ten counts. Guilty on all ten. Everyone in this room. Go to jail. Do not pass Go, do not collect $200. Indeed, depart to everlasting fire, worse than anything on Florissant Avenue. That’s what you and I would deserve in strict justice.

But Christ, our Savior–Jesus, the very Son of God–he has taken the guilty verdict on himself, suffering the punishment that sinners deserve, only he was entirely without sin. Jesus’ death on the cross covers us all and cleanses us of our guilt. We get his righteousness in its place. Now by faith we stand before God and receive Christ’s commendation, not our condemnation. This is good news, really good news! And we could use some good news for a change!

This puts everything in perspective, doesn’t it? We know our woes are temporary. Oh, they still hurt. They’re still painful. But we knows there’s more to it than that. There is a resurrection in store for us. There is eternal life ahead of us. Jesus’ own resurrection and his coming return assure us of this. And even now, we know that God is with us in the midst of our pain. Our Father cares for us, and he will give us strength to endure. And we can call on God in prayer for relief and healing, and we know that he hears us in his mercy.

And on top of the ultimate solution, our eternal salvation in Christ, God our heavenly Father continues to bless us with many daily blessings, blessings far more than we deserve. Think of the food and clothing and health he does give us. Think of the wealth and prosperity that we Americans enjoy, even in the midst of a downturn. Yes, there are many things to be thankful for on this Thanksgiving Day, 2014.

Just ask Habakkuk. He was facing a Ferguson kind of time, wasn’t he? And yet, by faith–faith in our faithful God’s many promises–Habakkuk could close his book with a beautiful expression of praise and thanksgiving. It’s right there in your bulletin, Habakkuk 3:17-19. Let’s read it together:

Though the fig tree should not blossom,
nor fruit be on the vines,
the produce of the olive fail
and the fields yield no food,
the flock be cut off from the fold
and there be no herd in the stalls,
yet I will rejoice in the LORD;
I will take joy in the God of my salvation.
GOD, the Lord, is my strength;
he makes my feet like the deer’s;
he makes me tread on my high places.