The Jehovah’s Witnesses interlinear Bible, titled The Kingdom Interlinear Translation of the Greek Scriptures (KIT), was first released in 1969.  Called “the purple people eater” by many Christian apologists because of its purple cover, it contains the Westcott-Hort Greek text along with the Watchtower’s New World Translation of the Christian Greek Scriptures (NWT).  The NWT, released in 1961, twists Holy Scriptures to suit the doctrinal views of the Watchtower.  Some of the lowlights, quoted from the 1969 KIT, include Colossians 1:15-20:

He is the image of the invisible God, the firstborn of all creation. For by him all things were created, in heaven and on earth, visible and invisible, whether thrones or dominions or rulers or authorities—all things were created through him and for him. And he is before all things, and in him all things hold together. And he is the head of the body, the church. He is the beginning, the firstborn from the dead, that in everything he might be preeminent. For in him all the fullness of God was pleased to dwell, and through him to reconcile to himself all things, whether on earth or in heaven, making peace by the blood of his cross.

The Watchtower works hard to demote Jesus to the status of a lesser god and a created being.

The KIT is rather difficult to obtain in hard copy, which is too bad, considering the ease with which one can refute the Watchtower’s own translation using the Greek.  Recently, the Watchtower released an app called JW Library, available for smartphones and Kindle.  Its primary Bible is the NWT – but it also contains the KIT, which can be displayed in parallel fashion by clicking on individual verse numbers in the NWT.  The JW Library is a boon for anyone seeking to dialogue with a Jehovah’s Witness – it is readily available for free, easy to use, and can be proven to be a legitimate Watchtower app (which an unfamiliar Witness will assume to be a fake when it disagrees with their theology).  You can visit your phone’s app store to download a copy of the app, or obtain more information here.  For more comprehensive information on obtaining other hard or digital copies of the KIT, go here.

Jesus is not a god, He is the one true God, begotten of His Father before all worlds.  This is a message that the Witnesses need to hear, and using the KIT is a great way to make the point.

Screenshots of the JW Library app: 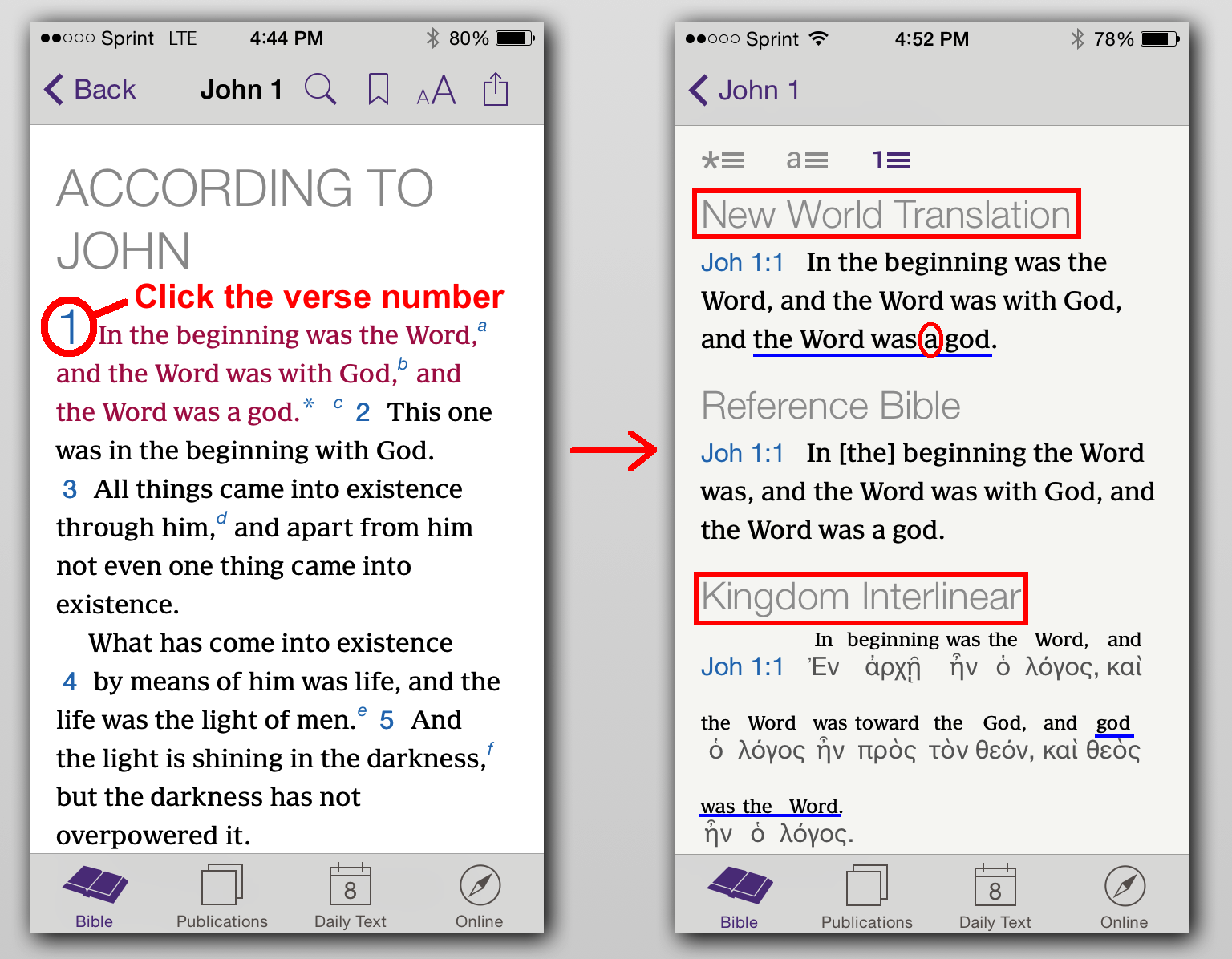