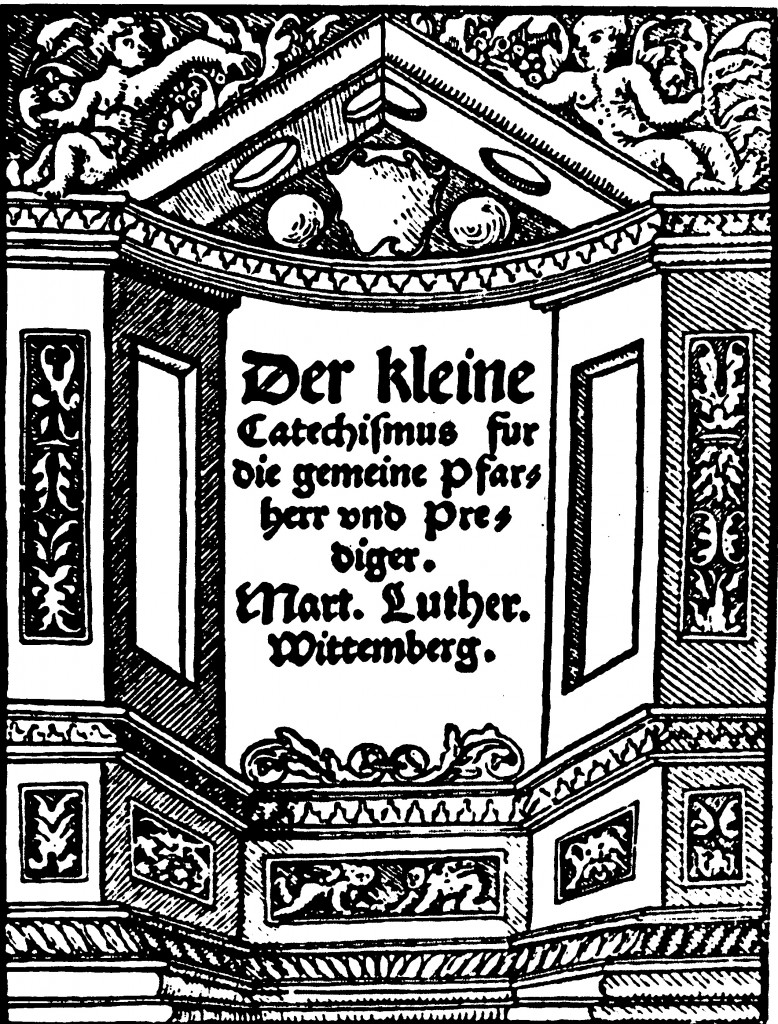 year the Lutheran Book of Concord was published and adopted as the confession of what Scripture teaches.

But how did they use the Small Catechism?

The first of these three sections reads:

As there is no more necessary preaching than that of the holy Catechism, in which is contained the sum and substance of the entire Holy Scripture of the Old and New Testaments, by which all other sermons to the simple people my likewise be regulated for their better instruction and for the strengthening of their faith, therefore the pastors and servants of the Church shall take this to heart and be admonished with special diligence as to the preaching of the Catechism, so that the common man, and especially the young and foolish people may learn to understand the same so much better and may always grasp what is preached.

They shall not permit any other catechism to be taught to the people in the churches or in the schools than the one put into print by that eminent man, the sainted Doctor Martin Luther, and embodied in his books.

In order that the same may become known to everybody, the village pastors shall read the whole Catechism each Sunday before the Gospel, without explanation, and with a loud voice, distinctly and intelligibly, together with the morning and evening prayer and the grace before and after meals, and shall also admonish the young and simple people to listen diligently, that afterwards the parents may profitably use the same with their children and servants at home.

The pastors and clergymen shall always treat the Catechism in the same form and manner, and in teaching it shall not wander far afield to prove their art and skill, but shall explain it to the young people in the plainest manner, and shall again and again question them and examine them, using no side questions not contained therein; for young inexperienced people are confused and can retain little if one treats the Catechism copiously and with varying form and manner of speaking. This service the pastors in towns and villages shall require the young people, the children, servants, and maids, to attend and shall earnestly admonish the parents, masters, and mistresses, to send them diligently to such preaching and explanation of the Catechism and under pain of severe punishment not to neglect it, and when a part of the Catechism has been presented and explained to them, the parents, masters, and mistresses shall question them at home, to ascertain how much of it they have learned and retained. Thus from childhood they will be encouraged and trained diligently to pay attention to their instruction.

When the young people cannot readily come to the church during the week on account of farm work or other labor, the Catechism shall be taught in the afternoon on all the Sundays and feast-days to the young people in the manner above described, — the Epistle however is to be read and explained with a short summary on some other day in the week, on which day, or some other, the pastor shall hold an examination in the Catechism.

The pastors, however, shall be gentle and not speak rudely to the poor, simple, industrious people, nor frighten them away from such examination, but address them kindly and at the first be content with a passable answer, and they shall encourage them by telling of the fruit that will result from such instruction. The pastors shall also admonish the fathers and mothers from the pulpit that they hold their children and servants in a kindly way to such examination, and also encourage the young people by appearing willingly at the examination themselves.

When, however, in the villages or in the affiliated congregations there are so many people that it is impossible for the pastor to attend to all the work himself, we order that the sexton or church-warden shall do so–this, however, shall not take place until they have been thoroughly examined and approved by the consistory–; they then shall be charged with the instruction in the Catechism, and in questioning and hearing the recitations of the young they shall be restrained and gentle as before directed.

And that the servants may learn how to pray, several times each week, especially after meals or before retiring the parents shall rehearse the several parts of the Catechism, or let those who have learned it in the school recite to the others. If, however, they themselves are untaught and have no one in the home who could read, they shall pay a poor boy of the school, that he may recite the Catechism or read and teach spiritual hymns to their servants at stated times.

But above all the house-fathers shall diligently be admonished to keep their children, lads and maidens, (where schools for girls are maintained) at school, where they can memorize the Catechism for themselves and can learn to teach others.

The pastors shall particularly subject those who go to the blessed Sacrament for the first time to a thorough examination in the Catechism to determine if they have learned it, as well as to inquire whether they are otherwise fit to be admitted to the Communion.

1929 Luther’s Small Catechism: A History of Its Origin, Its Distribution and Its Use. Wartburg Press, Chicago. Pages 155-157