Dr. Dale Meyer, current president of Concordia Seminary, relates that one of Dr. Dean Wenthe’s favorite stories was of a cab ride he shared with the president of another denomination’s seminary. Wenthe asked what the hottest debate was on his campus, and he answered “whether or not Jesus Christ was/is divine” (“Pedagogy for a Politicized Church,” Concordia Journal, Winter 2014, 6). 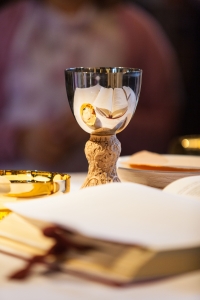 Well, we aren’t debating whether Jesus was/is divine. We’re doing worse than that. We’re not debating at all, and we don’t regard the debatable things between us as divisive of church fellowship.

We’re not debating at all because resolutions sent in to synodical conventions by congregations and whole districts to get the debate on the table, like whether we should continue to be fellowship with the AALC are kept off the convention floor.  A floor committee consisting of a handful of people effectively forestalls the debate, but in truth, even if such things made it to the convention floor only about 11% of the LCMS pastors and congregations are represented there.  N.B. 100% of LCMS bureaucrats are.

Worse than our non-debate is our continuing to go to communion together when we know we are not of the same mind as Scripture pleads with us to be (1 Cor. 1:10).  Into the beautiful union Christ gives to us in His Body and Blood we bring our human disunity.

As there is no possibility of light having fellowship with darkness, so there is no possibility that open Communion has any fellowship with closed Communion.  Moreover, Jesus doesn’t say both that His order of creation pertains to home and church but not at all to world and that it pertains to all three.  Also, Jesus doesn’t say both that Christians pastors may pray with pagans to spread the Gospel and that they may not. Finally, Jesus doesn’t say the world was created in six days and that it evolved over billions of years. When those who hold such contradictory teachings commune together, they are either saying that Jesus doesn’t care about the differences or that He is speaking out of both sides of His mouth.

One of the main points of Meyer’s article is that discussion between pastors is to be theological not political.  I agree.  And the very first theological thing that ought to be spoken by our leaders is a plea for us to stop going to Communion together when we know we do not agree.  Stop pretending a koinonia exists where we know it doesn’t.      As Elert’s Eucharistic and Church Fellowship abundantly demonstrates, even the Arians and other heretics wouldn’t do that. Neither would the orthodox of course.  The only ones who were in favor of continuing and even forcing opposing theologies and contradictory truths to commune together were the politicians of the State and later of the institutionalized church.

Finally, what bugs me with the “well at least we’re not” argument is that it is contrary to Paul warning us not of big bugs in loaves of bread but of a little leaven that leavens the whole lump. Besides the argument for pure doctrine can never be one of degrees.  There is no such thing as being close enough to the truth.  If you’re close to the truth you’re still in error.