Since the word “vocation” is thrown around so much, I have been trying to work out in my mind and through study of God’s Word how we may actually speak of and teach about vocation. The following reflects what I have been working through for a few years, and I would appreciate any input. 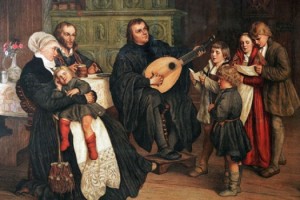 Vocation is from the Latin word, vocatio, a calling. If something is your calling, then that means that God called you to do it; it means God told you to do it. And if God told you to do X, then it follows that he ordained and instituted the specific work of X. There are particular vocations, such as pastor, father, mother, husband, wife, and child. God has also instituted the government to maintain worldly order and peace. And then there is the general vocation that he extends to all Christians, known as the call of love (vocatio charitatis). Some particular estates or vocations take priority over others. If a Christian holds a governing office, and he is neglecting his family, then he should step down from his office. In fact, the same goes with a pastor (1 Tim 3:4,5). We consider the preaching office both spiritually as well as orderly, that is, in the order of creation. This is why Paul forbids women from teaching and preaching publicly (1 Tim 2:12-14; 1 Cor 14:34-37). Now, according to its specific task to preach the gospel, the office of pastor is the highest office (1 Tim 3:1; Heb 13:17). But according to creation, the office of parent takes the cake (LC I, 141).

What do all of these things listed have in common? That they entail good works and service for the church? Sure, that’s one thing. But more specifically, they are all instituted by God. I really can’t say for sure that God called me to do something – that is to say, God told me to – unless he has actually instituted and commanded it in his Word. All of these vocations listed above are actually instituted by God in his Word. If such or such an office is not instituted and specifically commanded by God in his Word, then we have no certainty or liberty to say that someone has a call to such office. A humanly instituted office may include very good work that serves the church, the home, and society, but that does not mean that that office is itself a vocation from God. It may contribute to a specific vocation – and certainly often does! – but we cannot call it a vocation as such unless God has actually said so.

Allow me to give some examples of services that, though often beneficial to assisting divinely instituted vocations, are not themselves vocations. Having just spent my final year at seminary, what comes to mind is the office of deaconess. The office of deaconess is instituted by the church in her freedom to offer various kinds of charitable care in Christian love. Many deaconesses do very good works of service, especially to other women. However, the office of deaconess is not instituted by God in his Word. God has commanded all Christians to love one another and care for one another according to various needs.  And he has given a general mandate to the older women to instruct the younger women in what is good, teaching them to care for their children and submit to their husbands (Titus 2:3-5).  But he did not institute a particular church office of deaconess to carry these tasks out. Such specific task of deaconess serves the general call to love and care for the neighbor.

Other examples go beyond the church. There is the job of fireman, barber, butcher, baker, and candle-stick maker. The specific job-descriptions of being on call for when there is a fire, for cutting hair, baking bread, or making candles – many good things – are not specifically given in God’s Word.

So what? Are such labors of Christians in vain? Of course not! Christians use various occupations to serve their neighbors and confess the truth. Christ says, “And I tell you, make friends for yourselves by means of unrighteous mammon, so that when it fails they may receive you into the eternal dwellings (Luke 16:9).” So you serve your neighbor by means of material goods. That is your vocation. What the specific job you do to acquire that material wealth is not necessarily your vocation. In fact, the mammon will itself fail, as Jesus says. But your service to your neighbor will not fail if it is done by faith in Christ. Your specific job description is not what defines you in your vocation as a Christian unless that job description is specifically given and commanded by God. What is given and commanded by God is that you serve and help your neighbor. So if you are a deaconess, a school teacher, a financial planner, a journalist, or a candle-stick maker, you use your occupation to serve your neighbor. But the occupation might change.

So why the distinction? Why is it so important to distinguish between a fireman and a husband, or a deaconess and a mother? I suppose there are a number of reasons why it is important to clarify what God actually did and did not institute. But one reason that comes to mind is priority. A woman might have to quit her job so she can take care of her children. Or in other cases, she might have to work from home or outside the home for the very purpose of helping her husband support their family. A Christian father might need to take a different job if his current occupation is pulling him away from his duties at home. The circumstances may vary, but the office is the same.

Another reason that comes to mind is that we should be careful not to allow the offices that we institute to deprive us of other divinely instituted offices. Rather, the former should serve the latter. This is especially crucial when we consider offices that churches have established to promote the truth and Christian charity. When Christian husbands and wives, for example, purposefully deprive themselves – whether temporarily or permanently – of the office and calling of parent so that they can “serve the Lord” in an auxiliary office in the church, then the church has defeated her own purpose. It becomes a terrible irony!

So let’s think about how we speak of vocation. A vocation is not simply whatever job you have managed to get. It is a bit simplistic to define vocation as: “Having a job that isn’t in itself sinful + Being a Christian = Having a Vocation.” Now, your general vocation is to love your neighbor, which includes whatever boss or supervisor who might have authority over you. But just because you are called by God to treat whoever has authority over you with honor and respect does not mean that the occupation you have, in which you fulfill this general call, is, as such, your vocation.

A Christian man, in Christian liberty, is free to quit his job as a cook, for example, if he finds, according to the call of love, that he would be better off doing something else to serve his neighbor. Often a woman who serves as a deaconess or a school teacher – or what ever – determines, according to the law of love and in Christian liberty, that she should quit her job for the sake of her family or perhaps for some other godly reason. According to the call of love, it behooves them to give their supervisors as much due notice as possible before they quit their particular occupations. But they are nevertheless free to make these decisions.

On the other hand, a man is not free in the gospel to quit being a father or to prevent himself and his wife from being parents in order to fulfill some other aspiration. The same is true for mothers, husbands, wives, sons, daughters, Christian brothers and sisters, and pastors. Sometimes pastors must lessen their loads or are even not able to fulfill their duties anymore due to old age or poor health. And often a pastor takes a call to serve another congregation of Christ’s flock. But for a pastor arbitrarily to decide that he just isn’t up to it anymore is not godly. St. Paul first tells the Ephesian bishops to take heed unto themselves, and then unto the flock (Acts 20:28). In other words, examine yourself, and remind yourself what God has called you to do; do not neglect the gift – the duty! – that was given you (1 Tim 4:14).

This article has been almost completely law. And that’s alright, but since I am compelled to speak (or write) the gospel, here is how it relates. When God tells you to do something specific, the comfort is in the fact that what he has created he has also redeemed. When God tells you to be a father, he does this by means of giving you a son or a daughter. He sets you in an office that he created by creating that which makes you in the office. And he redeems his creation. That is to say, he forgives you your sins that you commit in your calling and credits to you through faith the obedience of his Servant whom he has sent.

God gives you neighbors to love, teaching you how to love your neighbor. He desires to save all of your neighbors (1 Tim 2:4). And your service to your neighbor is not in vain. Even when a Christian laments over his heathen acquaintances who only seem to scoff at his Christian confession, he can take comfort in Christ’s promise that whoever confesses him before men has the comfort of Christ’s intercession to his Father in heaven (Matt 10:32).

Our Lord redeems his creation. A father takes comfort that his children who are raised in the instruction of Christ are in the care of their Lord who created them and redeemed them. And even when parents mourn the unforeseen apostasy of their child, they take comfort in the Word of the Spirit that they know sanctifies their struggles and creates faith — even calls back to faith — where and when God pleases (John 3:8; AC V). In other words, by God’s grace, solely because of Jesus’ merit, our labors are not in vain. And a Christian who labors in the work that was prepared for him to walk in (Eph 2:10) knows that he serves not man, but his Lord, who is gentle and kind to him (Col 3:24) and has saved him by grace (Eph 2:8,9), confident that his Lord rewards him, not because of his own efforts and struggles, but because of the merits of Christ (Eph 6:7,8). A woman whose husband is a jerk continues to serve and honor him for Christ’s sake, taking comfort in the hope that her Lord has set before her. She know that whatever she does, she does in the name of Christ, her merciful Lord and Savior (Col 3:17) who saves her from sin and hell by his grace even throughout her childbearing (1 Tim 2:15).

For the sake of Christ’s obedience unto death, God declares you righteous through faith. That is to say, he credits to you the perfect obedience of Jesus. And this means that he credits to your labors the labors of a righteous man. When Paul says what he says in Ephesians 2:10, he isn’t moving beyond verses 8 and 9. His point is rather that the labors that God prepared for you to walk in are not in vain, because he has saved you by his grace through faith. So we extol all good works that contribute to the the general vocation of loving the neighbor. And we especially extol the specific vocations that God has instituted, trusting, even when it isn’t so apparent, that what God has created he has also redeemed.