In the name of the Father, Son, and Holy Spirit. Amen.

Do you know what command is given most often in the Bible? Think about your answer because the right answer might surprise you. Is it, “Do not kill”? Is it, “Love God,” or, “Love your neighbor”? Is it to rightly worship God? Is it, “Be more moral”? If you guessed any of these, you are wrong.

The command most common command in Scripture (by N.T. Wright’s count) is, “Do not fear.” Jesus gives this very command three times in this text alone, “Do not fear.”

In Junior High and early High School, my favorite article of clothing was a sweatshirt which had a little logo embroidered over my heart which said, “No fear.” That sweatshirt was my favorite. It was forest green with a plaid hood. I felt super cool wearing it, so I probably wore it more often than I should have. I would don that bold and defiant statement, “No fear.” However, underneath that sweatshirt was the skin and bone frame of a timid, dorky adolescent. In reality, I feared lots of things. I feared the mean kids. I feared being left out and rejection. I feared that no girl would ever like me.

I’ve mostly grown past those fears. I don’t live in fear of the neighborhood bully. I have learned to not care what others think about me. And I’ve gotten married. But I still fear many irrational things. I fear that because I don’t take good enough care of my house that it will someday collapse on my family. Even though I never came within 100 ft. of it, I feared the industrial wood chipper that workers from the city were using earlier this week as they cut down trees in our neighborhood. On top of that, I have mild mottephobia. Yes, I admit it; I fear moths – I hate how they flutter. 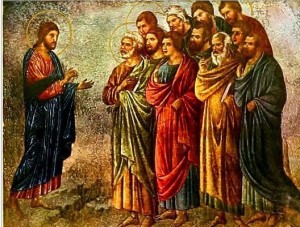 These words from Jesus today speak of persecution that comes because of a faithful confession. In this text, Jesus is sending out His twelve disciples to preach His message, “The reign of heaven is at hand” (Mt. 10:7). And Jesus doesn’t hide the fact that people will hate them for this proclamation. He says, “Brother will deliver brother over to death, and the father his child. You will be hated by all for My name’s sake.” Jesus says, “They have already maligned me by calling Me ‘Beelzebul.’ They will certainly malign you too.”

These words of Jesus are very solemn and sobering and downright scary. But throughout this text, Jesus’ command, “Do not fear,” dominates. In the face of persecution, Jesus tells His disciples, “Do not fear.”

We ask, “Why, Jesus? What rational reason can You give us to not fear?”

We wish Jesus would say, “Do not fear because I will spare you from suffering.” But that is not our experience; we do suffer in this world. Jesus doesn’t say that we will not suffer; in fact, those who are most faithful to Him will likely suffer most. We are not greater than Jesus. He suffered persecution. We should expect suffering and persecution as His servants.

Consider each of these for a moment.

“Do not fear because everything done in secret will be made known.” Now, at first glance, this is a terrifying thing. Think of all those sins that you have committed and gotten away with. Think of all those things you have thought and said and done which you think are secret. Jesus says that they will be revealed.

But then remember, believer, that in baptism you have been clothed in the righteousness of Christ (Gal. 3:27, 2 Cor. 5:21). When God looks at you, all He sees is Jesus – His perfect life of obedience and His suffering, dying, and rising – for you. So no matter how discretely you are persecuted, God knows it all. God is a just God and will ultimately not allow sin to go unpunished. “Do not fear.”

Secondly, “Do not fear because the worst thing people can do to you is kill your body. They have no power over your soul.” Again, this doesn’t sound very comforting on the surface. All we know is our existence in this life, so the death of our body is something we fear.

But God tells us that there will be a resurrection of the dead and that there is life in the world to come. God has the power and rightful authority to cast you, body and soul, into hell. Because of your sin, you deserve that eternal punishment which was prepared for Satan and his angels (Mt. 25:41). But that is not your destiny, Christian. For you, God has prepared from before the foundation of the world (Mt. 25:34) an eternal kingdom of righteousness, innocence, and blessedness. “Do not fear.”

Finally, “Do not fear because you are more valuable than many sparrows.” Jesus says that two sparrows are worth only a penny (back then this was 1/16th of a day’s wage). Sparrows are basically worthless, but God takes note of every sparrow that dies.

Even beyond that, at any given moment, God knows the number of hairs of your head. He knows you and every part of you intimately and perfectly. And He loves you. Even if you are persecuted, suffer, and die, God knows. “Do not fear.”

In the face of persecution and death, Jesus tells His disciples – and you – do not fear, but acknowledge (lit. ‘confess’) Christ. Jesus solemnly urges you to make your confession of salvation through Christ. He has redeemed you and everyone you meet with His holy and precious blood and with His innocent sufferings and death.

My “No Fear” sweatshirt was meaningless words of thread. But Jesus’ simple words, “Do not fear,” are more than your normal, everyday words – they are God’s words. God’s words are His actions, so, “Do not fear.”

God’s love for you is unquestionable. He has sent His Son to suffer and die for you. He has forgiven your sins. As far as the east is from the west so far has He removed your sins from you. “Do not fear.” Amen.

The peace of God, which surpasses all understanding, will guard your hearts and minds in Christ Jesus. Amen.