Consider the argument settled. The Latin version settles it—as it often does . . . 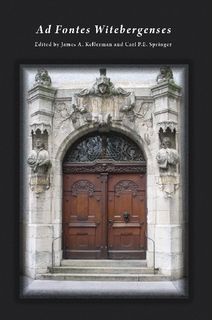 After the Yankee Stadium “Prayer for America” in September 2001, in which a district president of The Lutheran Church-Missouri Synod joined together in a worship service with non-Christian clergy, a defense of his participation was made. The argument came from the Lutheran Confessions, of all places! The argument was made on the basis of Large Catechism II [i.e., the Creed,], 66, which reads: All who are outside the Christian church, whether heathens, Turks, Jews, or false Christians and hypocrites, even though they believe in and worship only the one, true God, nevertheless do not know what his attitude is toward them. (Tappert edition, p. 419; you can read the original text here — zoom in, then scroll down to the last paragraph on the page).

In brief, the double-jointed defense argued that it is okay for LC-MS pastors to pray together with non-Christian clergy, since these non-Christian clergy believe in and worship the true God, therefore we can ignore LC-MS Constitution Article VI.2., which prohibits syncretistic activity of all types.

I remember sitting in my office, reading about this argument, and thinking, “That’s ridiculous! I bet the German text settles that argument.” I pulled down off the shelf both my Bekenntnisschriften and my Triglotta to check the German. These books are, respectively, German-Latin and German-Latin-English versions of the Lutheran Confessions. I looked mainly at the German, since I have used that frequently since my high school days.

I observed that the Triglotta emphasized the word “one” in “one, true God” with the double-spacing of letters, known as “Sperrdruck.” This emphasis was not in the original text (see link above). The editors of the Triglotta thus wanted to emphasize that the definite article was missing. Thus the translation should read “believe in and worship only one true God,” without the definite article “the” found in Tappert, which can mislead the reader.

I also noted a discrepancy in the grammatical mood. For the word “believe in,” the Triglotta had “glauben” which is the indicative mood. But the Bekennnisschriften has “gläuben” which is the subjunctive mood, which is also found in the original with the older spelling “gleuben” (see link above). One umlaut makes the difference here. The subjunctive mood meant Luther was setting forth a hypothetical case for the sake of argument, NOT asserting that heathens, Turks, and Jews believe in the true God as a matter of fact.

Soon a number of scholars brought forward very helpful articles about this translation problem: Dr. John Wohlrabe, then an LC-MS Navy chaplain (now the LC-MS 2nd Vice President); Dr. John Nordling and Dr. Roland Ziegler, professors at Concordia Theological Seminary–Fort Wayne; Dr. Charles Arand, Dr. James Voelz, and Dr. Thomas Manteufel, professors at Concordia Seminary–Saint Louis; Dr. E. Christian Kopff, a professor of Classics and Associate Director of the Honors Program at the University of Colorado at Boulder; and Dr. Jon Steffen Bruss, at that time a professor of Classics and the Honors Program at University of Kansas at Topeka. Most extensive of all was the discussion provided by the Rev. Edward Engelbrecht (M.Div., S.T.M.), Senior Editor for Professional and Academic Books at Concordia Publishing House, in his monograph One True God: Understanding Large Catechism II.66 (CPH: 2007.) All these scholars agreed that Luther was not asserting that non-Christians worship the true God or believe in Him.

In spite of all these excellent articles and treatises, there were still a few who defended the notion that non-Christians worship the true God and believe in Him–at least they defended that idea for a time. Their names are not worth repeating here or in the comments section of this blog–so please don’t do that! Their complaints and influence led to a “recall” of the new CPH edition of the Lutheran Confessions. CPH then spent almost a year in careful negotiations with the LCMS Commission for Doctrinal Review (aka D.R.), with the result that D.R. withdrew all of it objections to the 2005 edition. CPH then issued a second edition, as well as an Addendum for the 2005 edition, both of which strengthened the translation of the passage in question.

It was a very odd time, when the same people who usually claim they are the chief proponents for “missions,” were furiously defending an idea that eliminates the purpose of missions. If Buddhists believe in and worship the true God, then attempting to convert them to Christianity is, in fact, a form of “sheep stealing” from the Buddhist monks who allegedly “believe in and worship the true God.” I could not believe the contrary-to-logic rhetoric I heard from people’s mouths in those days.

Fortunately, we now live in better days, where good logic and good grammar are heard and respected in the LC-MS. Proof of this is the essay by the Rev. Larry Myers, “A Case for Latin: A Linguistic Note on Large Catechism II, 66.” This essay is found in the paperback book: James A. Kellerman and Carl P. E. Springer, eds., Ad Fontes Witebergenses: Select Proceedings of ‘Lutheranism and the Classics II: Reading the Church Fathers’ Concordia Theological Seminary, September 28-29, 2012 (Fort Wayne: Lutheran Legacy Press, 2014) [order from CTS bookstore; or through LULU here ; available in both hardback and paperback, with many other essays from the conference]

Pastor Myers is Associate Pastor of Elm Grove Lutheran Church, Elm Grove, Wisconsin. He spent his entire career in the USAF Reserve. His ministry included service in Frankfurt am Main in Germany, he served as the first-ever Reserve chaplain on the Joint Staff of the Joint Chiefs of Staff (1998-2001), and he retired in 2002 with the rank of Colonel. He received his Ph.D. from Saint Louis University in 1987 in Classical Languages. In the essay mentioned, he proves beyond a shadow of a doubt that the Latin mood in the controversial phrase is subjunctive. Myers states “[Luther] was not presenting a statement of fact; he was merely being hypothetical, at best, for the sake of argument” (p. 173).

Buy the book and read the article yourself, if you don’t believe me or Pastor Myers. Don’t try to argue the case before reading Myers and the related literature he cites, or you will make a fool of yourself. The first edition of the CPH Concordia (2005 edition) had the correct translation. Case closed.