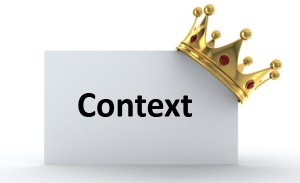 It’s no secret that context is a major buzzword these days. From marketers who will sell you demographic information about your town (information which, it should be noted, could just as easily be gotten by going to the grocery store) to pastoral ministry gurus who couch all their advice in context language, it’s practically inescapable. So what does the word mean? How is it wrongly used? Is there a right way to use a knowledge of one’s context?

Context, in terms of the church, usually has to do with one’s surrounding people, culture, and geography. In Cheyenne, Wyoming, for example, one might describe the context with terms and phrases like “high plains desert”, “rugged individualism”, “military town”, “state capital”, “mostly Evangelical and Calvinist”, “simple piety”, and so forth. These ideas are important to understand where the Christian finds himself. Cheyenne is very different from a place like, say, New York City. The air is drier here, the altitude is higher, the people tend toward more conservative and libertarian political preferences, population density is drastically lower, cost of living is generally far lower, the predominant religious group is not necessarily Roman Catholics, etc. But there is a lot that is the same about the contexts of New York City and Cheyenne: people are suffering and dying, the world is falling apart, idolatries abound, false gospels tear the faithful from the Church, Christians may not know Christian doctrine very well, the congregation could use a healthier bank account balance.

So what to do with such knowledge? There seem to be two major ways to use such knowledge in the church. The first way would be to know what sort of idolatries and false gospels are around you. In Cheyenne we have Mormons. Go west and you’ll find even more Mormons. As a pastor I might do well to make sure my congregation knows something about Christianity over against Mormonism so that 1) they are not fooled and 2) they can witness to the truth of the Gospel to those who have been seduced by the false gospel of Mormonism. At the same time, I might note that the American West has a lot of Calvinist influence, and as such our congregation might consider worship practices that confess that we Lutherans are most decidedly not Calvinist. In this way, I would be using context to ensure that my and my congregation’s doctrine and practice clearly confess the truth of the Gospel over against the idolatries and false idols of our context. Or, if I notice that in my area many people are speaking a language other than English, my congregation might offer services in that language, that would be a use of my context.

The other way does exactly the opposite. The other way is about looking at context and determining which practices (and thereby, which articles of doctrine) are most palatable to those around you. So if I notice that the most successful churches around me have a certain sort of worship — say, rock bands and big screens — this second way of using context might lead me to introduce those things in my congregation in the hopes of attracting people from the surrounding community in the same way the non-denominational church down the road did it. This second way of using context might also involve knowing preferred practices of a group of people or congregation and determining that those preferences will drive the practices of the congregation. This second way might recoil at the idea of liturgical worship being used in the Northwest United States, where the dominant culture nearly universally rejects anything that smacks of formality and conformity. This second way of using context to determine church practice is about making the church to be like and palatable to the surrounding culture.

So the question that a Christian congregation and Christian pastors ought to ask themselves is what they intend to do with their knowledge of their context. Context can be helpful in determining what idolatries and false gospels might disturb the flock of God, and what practices may reinforce the truth of the Gospel. On the other hand, context ought never be used as an excuse for poor practice or as a reason to make friendship with the world.