During this Lenten season we’ve been doing a series on the Lord’s Prayer called “Lord, Teach Us to Pray.” And that’s exactly what our Lord does on this Holy Thursday evening. He teaches us to pray. That’s what he instructs us to do, that’s what he gives us an example of doing, and, even more than that, he prays for us.

In particular, on this night Jesus instructs his disciples to pray for strength in the face of temptation. “Pray that you may not enter into temptation,” Jesus tells them more than once. It was a word they needed to hear. It’s a word we need to hear, also. For we too face temptation in our life, and repeatedly so.

And so it is fitting, as we work our way through the Lord’s Prayer, that tonight we should come to the Sixth Petition, “Lead Us Not into Temptation.” So let us go now, with our Lord and his disciples–let us go to dark Gethsemane and there learn from Jesus Christ to pray.

This Thursday evening was a night filled with trial and testing and temptation. It started innocently enough, or so it seemed. Jesus and his disciples celebrated the Passover meal together, a joyous occasion, commemorating how the Lord God had brought his people Israel out of bondage in Egypt. But there were dark doings going on behind the scenes on this night. One of the twelve, Judas, had agreed to betray Jesus later that night and hand him over to his enemies, who hated him. Satan had entered into Judas, first tempting him, and then, when Judas sinfully gave himself over to the temptation, Satan pretty much had Judas under his thumb.

So those wheels are turning, even as Jesus and the disciples are celebrating the Passover. And Jesus knows this. He knows he’s about to be betrayed and handed over to suffer and to die. And yet, in God’s great plan of redemption, this very suffering will be the fulfillment of what the Passover foreshadowed. For there is a greater bondage, a worse enslavement, that people need to be delivered from. It is the bondage of sin and death. Satan would have us all enslaved, as Pharaoh had the Israelites of old. But God put in motion a plan to lead his people out of bondage. Just as the blood of the Passover lamb marked the houses of the Israelites to be spared from death, so the blood of Jesus marks us to be spared from eternal death. This is the blood of the holy Son of God, which he would shed on the cross within a matter of hours, and which he gives to his disciples–and to us–in his Holy Supper. “This is my body, which is given for you. Do this in remembrance of me.” “This cup that is poured out for you is the new covenant in my blood.” Yes, a new covenant, a new relationship with God, established in the blood of Christ, shed for you for the forgiveness of sins.

Soon we will see how much Christ’s disciples need that forgiveness of sins. For they will all fall away, even the ones who think they are standing the strongest. Jesus tells them that one of them is about to betray him. They begin to question which one of them it might be. But before long, this question gets sidetracked into a discussion of one of the disciples’ favorite topics, which was, which one of them was the greatest.

“A dispute also arose among them, as to which of them was to be regarded as the greatest.” Imagine that. They’ve just celebrated the beloved Passover meal. Jesus has just instituted the Blessed Sacrament of his Body and Blood for them. Jesus solemnly tells them that he, their Master, is about to be betrayed and handed over into suffering and death. And what do they do? They start to squabble among themselves as to who’s the greatest, who’s the best, who’s the most important among them. Internal squabbling in the church, God’s people fighting about who’s in charge, when they should be fixing their eyes on Jesus and the salvation he brings–this is nothing new. It’s why we need to pray that we do not fall to this temptation. It’s why we need the forgiveness that Jesus goes to the cross for and that he gives us in his Sacrament. “But I am among you as the one who serves,” our Lord says.

The trials and testings and temptations are not over. Judas has succumbed. Satan has entered him. Who’s next on Satan’s wish list? How about the disciple who always seems to be the spokesman for the group, the lead disciple, if you will, namely, Simon Peter? Yeah, Satan has his eye on you, Simon. Earlier you had tried to dissuade Jesus from going to Jerusalem, when he said that he would suffer and die there. And Jesus had to rebuke you, saying, “Get behind me, Satan.” Now, Simon Peter, Satan would have another go at you.

But Jesus also has his eye on you, Peter–for your good. He will not let you fall completely away. “Simon, Simon, behold, Satan demanded to have you, that he might sift you like wheat, but I have prayed for you that your faith may not fail. And when you have turned again, strengthen your brothers.” But Peter thinks he doesn’t need that kind of help. There’s no way he, of all people, would ever shrink away in cowardice and fear–or so he thinks. “Lord, I am ready to go with you both to prison and to death.” Well, let him that thinketh he standeth take heed, lest he fall. In other words, don’t be so cocksure of yourself, Peter. Indeed, before the cock crows twice, you shall deny me thrice.

Dear friends, how about you? Are there times when you have come home from church and you think you’re pretty strong in the faith, and then the next day–or maybe even later the same day–you fall back into a sin you’ve committed before and you thought you weren’t going to do again? By your words or your actions, do you deny that you know Jesus? Well, welcome to the club. Simon Peter is not only the president, he’s also a member. Dear friends, at times like those, Satan is desiring to sift you like wheat. But thank God, Jesus has prayed for you that your faith may not fail. Turn and repent, like the Lord led Peter to do. Jesus will restore you to fellowship and to service. 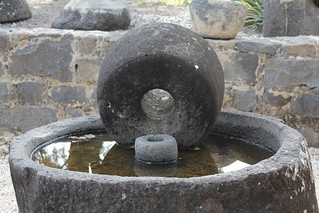 So Jesus takes the disciples out to the Mount of Olives, to Gethsemane, the place where the oil press is. “Gethsemane” means “oil press.” And like olives placed under the grindstone until oil is pressed out, so Jesus will endure the arduous pressure and agony of this night. What does he do in the face of this very real struggle? He prays. He turns to his heavenly Father in prayer. While according to his human nature Jesus would well prefer to not have to experience the bitter cup of suffering, if there were any other way possible to achieve the salvation of mankind–even so, Jesus willingly yields that desire to the greater goal of accomplishing the mission that the Father sent him on. “Thy will be done,” Jesus prays, echoing the prayer he taught his disciples to pray.

And as he prays, Jesus also tells his disciples to pray: “Pray that you may not enter into temptation.” If our Lord himself prays at his time of testing, how much more do we need to pray! “Pray that you may not enter into temptation.” Temptation is all around us. The devil, the world, our sinful flesh–so many things within and without would take us off track, would take our eyes off Jesus. Therefore Christ would have us watch and pray, to take up our full spiritual armor. For, make no mistake, we are in a battle. The Christian life is a life of struggle, an ordeal, with forces pressing down on us, like we’re those olives in the oil press. Will we give up on God? When financial adversity hits, or sickness, or the death of a loved one, will we despair of God’s goodness? Will we listen to the siren song of this world, which would allure us with pleasant thoughts of indulging our pleasures–a happy life–and ignoring the more difficult path of life in the church? Will we give up on Christ’s church, thinking we can go it on our own? Will we sit and stew in bitterness and unforgiveness, when we have something against another Christian? These are all temptations that we Christians face. We face these things, each one of us does, in one form or another. How we need God’s help and his strengthening to overcome these temptations!

And as Luther explains in the Catechism: “Although we are attacked by these things, we pray that we may finally overcome them and win the victory.” Yes, we do. And we pray this petition, “Lead us not into temptation”–we pray this in confidence, knowing that our Lord Jesus Christ has indeed won the victory for us. He endured the oil press of Gethsemane on this night, and, tomorrow, the cross of Calvary. Even there, on the cross, Satan, speaking through the mockers, will try to get Jesus to give up on his mission: “If you are the Son of God, come down from the cross.” But Jesus would not yield. He stayed the course. He fulfilled his mission. And the result–the result is astounding and wonderful, and it is God’s gift to you tonight: Forgiveness for your failure; receive that forgiveness anew tonight in the Blessed Sacrament. Access to God in prayer in your times of temptation; yes, strength in the face of temptation. And eternal victory over all your foes, Satan and death included.

Dear brothers and sisters in Christ, on this Holy Thursday evening go to dark Gethsemane, and there you will see the answer to all your prayers. He’s the one praying for you tonight, namely, Jesus Christ, your Savior.