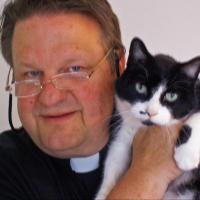 This post is meant to be fun, but it also makes a serious point.

In the course of writing for and serving as Associate Editor here at BJS I have found that lots of folks take issue with our Editor, Pastor Timothy Rossow for a number of things.  Some folks think he is just downright mean.  Others have ascribed to him the work of the devil.  Over the years at BJS he has even received death threats.

Well, after four years of knowing and working with him I am not sure that is an accurate picture of the cat-loving ecclesiastical critic. But in order to try and understand this mean-poopie phenomenon, I and the regular crew of BJS Authors have come up with a list of reasons why he may be perceived as mean. Here they are in no particular order: (Some of these have been submitted by Pr. Rossow himself.)

Pastor Rossow is a Mean-poopie because:

Seriously, Pr. Rossow takes the confession of the truth as a matter of utmost importance.  This seriousness comes out in a lot of ways, some of which are labelled as mean.  As a sinner he sins and can even be mean at times.  He has in his own past dabbled in methods and theologies which he now speaks against with zeal.  This is because he has seen what these false teachings and practices do to people.  Souls are harmed when error is promoted or even tolerated.  People get confused when the practices don’t line up with the beliefs.  Confusion brings doubt, the very enemy of faith.  And in the end, all of this is about the Gospel – that people would hear about and have preached to them the real, true Jesus whom we Lutherans worship.

For those of you who know Pastor Rossow and even those who don’t, feel free to add your own reasons in the comments below.