Have you ever felt like you’re a bit of an outsider? Like you didn’t belong? That maybe you’re being looked down upon by others–whether fairly or unfairly. Maybe you’ve done something to bring some shame upon yourself. And maybe you feel some guilt before God. If this is the case, then I’ve got good news for you today. And we’ll find it out at the side of a well, where a Jewish man has come and meets “The Samaritan Woman at the Well.”

The Jewish man, of course, is Jesus, a rabbi traveling with his disciples. They’ve been on the road for some hours now, it’s midday, and they’re tired and hungry. The disciples go into town to look for some food, while Jesus remains at the well and gets some rest.

Here comes a woman with a water jar, come to draw some water from the well. Jesus asks her for a drink and engages her in conversation. Now what could be so strange about that?

Well–no pun intended–well, this woman has three strikes against her that should have kept a man like Jesus from talking to her. And the phrase I’m using to describe her, that is, “The Samaritan Woman at the Well,” this tells us why.

First of all, she was a woman. And it was considered inappropriate for a good pious rabbi to have a one-on-one conversation with a woman in public. It just wasn’t done. And so when the disciples come back later, and they see this happening, they’re a little surprised, if not shocked. As our text says: “Just then his disciples came back. They marveled that he was talking with a woman.” So that was strike one against Jesus having a conversation with her: She was a woman.

Secondly, she was a Samaritan. Now the Samaritans were a mixed-up bunch–literally. The history goes way back. If you go back about 900 years before Christ, the united kingdom of Israel got divided, split in two. The southern kingdom became known as Judah, with the palace of the Davidic kings and the temple of the Lord remaining in Jerusalem. The northern tribes, however, the ones that broke off, set up a new capital with a new king, not of the Davidic line, in the city of Samaria. And they also set up a couple of rival shrines, which God had not authorized. So that area around Samaria was off, even from the outset.

Then, a couple of hundred years later, about 700 B.C., the northern kingdom was conquered by the Assyrian army. The people of those northern tribes were dispersed, scattered around the Mediterranean world. And the Assyrians then brought in other peoples–Gentiles, non-Jews–to live in that area they had conquered. This was intentional, because it would have the effect of breaking down the national identity of the people they had conquered, those who remained in the land. Over time, the people there would intermarry, and so the ethnic identity and solidarity of the nation would be weakened. And their religious identity would be eroded also. The pagan influence would have a negative effect on the beliefs and practices of a people who were already off the beam, religiously.

So these were the Samaritans, a mixed-up people, both ethnically and religiously. And this woman at the well was one of them. So that was strike two against her. And the woman knows it. When this Jewish man asks her for a drink, she says, “How is it that you, a Jew, ask for a drink from me, a woman of Samaria?” And our text adds to explain, “For Jews have no dealings with Samaritans.”

Now this Samaritan woman is down in the count, 0-2. And here comes what ought to be strike three. And it has to do with why this woman was out at the well at this time of the day. Our text notes: “It was about the sixth hour.”

You see, it was not unusual for a woman to come out to the well to draw water. But it was unusual for a woman to come out there at that hour. “About the sixth hour”: That would be, according to our reckoning, around noon. Most women would come out to the well earlier in the morning, before the heat of the day set in. But this woman didn’t go out to the well at that time, when the other women would be there. She went when she wouldn’t have to deal with other people, when she wouldn’t have to endure their stares and gossip, even if she had to go out there under the hot sun. “It was about the sixth hour.” Remember, Jesus and his disciples had already been walking for a number of hours. They were hot and weary, which likewise tells us that this was in the middle of the day.

Yes, the Samaritan woman at the well was an immoral woman, sexually immoral, ostracized from her community, loaded down with shame and guilt. This should have been strike three. And Jesus knows it. He knows that she has led a scandalous life. And with his divine insight, he lets her know that he knows:

Jesus asks her to go call her husband. She answers, dodgingly, and says simply, “I have no husband.” But Jesus knows why this line of conversation makes her uncomfortable. He replies: “You are right in saying, ‘I have no husband’; for you have had five husbands, and the one you now have is not your husband. What you have said is true.”

Five previous husbands, and now she’s shacking up with a guy. In our day, in our crazy, decadent culture, this might not seem like such a big deal. Sexual promiscuity, multiple divorces, cohabitation outside of marriage–these have become almost the norm in our society. But in most cultures, for most of human history, these things were looked down upon as shameful. And rightly so. Willful violation of God’s institution of marriage is definitely a sin, and always will be, no matter what our culture may say at the moment.

So this Samaritan woman at the well is loaded down with guilt and shame. And yet Jesus engages her in conversation. Jesus was known for being the friend of sinners. Not that he approved of their sin. Far from it. But Jesus was all about calling sinners to repentance, that they would realize their sin, sense their need, and find their forgiveness in him.

This is what Jesus does with this woman, using the metaphor of water, water to quench one’s thirst. That well was right there next to them, so it was a handy way to move from physical thirst to spiritual thirst, and to move from H2O to the living water that Jesus provides.

Let’s listen in on the conversation. Jesus tells her, “If you knew the gift of God, and who it is that is saying to you, ‘Give me a drink,’ you would have asked him, and he would have given you living water.” The woman is confused; she’s thinking merely of H2O: “Sir, you have nothing to draw water with, and the well is deep. Where do you get that living water?” So Jesus takes her deeper: “Everyone who drinks of this water will be thirsty again, but whoever drinks of the water that I will give him will never be thirsty forever. The water that I will give him will become in him a spring of water welling up to eternal life.” Jesus here is talking about spiritual thirst and spiritual refreshment and life. The woman replies, “Sir, give me this water, so that I will not be thirsty or have to come here to draw water.” Perhaps she’s beginning to get a clue about where Jesus is going with this. She’s tired of living with her shame and guilt, and she’s sensing that Jesus just may be able to help her.

Which he does. Because where Jesus is going with this is, he’s going to the cross. There on the cross, Jesus will say, “I thirst.” He, the sinless Son of God, the only wholly innocent man–Jesus would endure the physical agony of the crucifixion, plus the burden of bearing the punishment that we sinners all deserve. Then, upon his death, his side is pierced, and out flows a sudden rush of blood and water. Yes, this is how Jesus has living water to offer you and to all sinners: His sacrificial death has won for you forgiveness for all your sins, whether you have led an immoral life, like the woman at the well, or a pretty respectable life, but still you know your need. The living water that Jesus gives is new life in the Spirit. It is eternal, everlasting life, life that overcomes even death itself. This living water Jesus gives, he gives free of charge. It’s all by grace. And it’s for you, you who are thirsty and know your need.

So, are you thirsty? Do you know your need? Stay thirsty, my friends. “Blessed are those who hunger and thirst for righteousness, for they shall be satisfied.” Whether you have one, two, or three strikes against you, Jesus wants to talk to you today, just like he talked to the Samaritan woman at the well. Yes, Jesus has living water for you today. Come and drink. 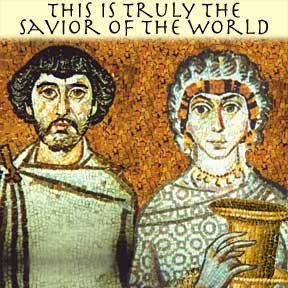 Oh, one other thing: Notice what the Samaritan woman did once Christ gave her the living water. In her joy and excitement, she went out and told others. And they believed also. So just maybe you might know some thirsty people in your life, in your town, who could use this living water that Jesus has so freely given to you. You know, our Lord has an ample, never-ending supply of this living water to give. And so you and I can say, with those Samaritans who came to faith in Christ–we can say joyfully about Jesus: “We know that this is indeed the Savior of the world.”