Apparently there is a movie out in the theaters now called “Son of God.” I haven’t seen the movie, and I don’t plan to, but it’s supposed to tell the story of Jesus. However, I understand that this movie doesn’t even include the account of Jesus being tempted in the wilderness–which is pretty ironic for a movie that calls itself “Son of God,” since a central issue in the account of the temptation is precisely Jesus’ identity as the Son of God.

Well, I haven’t seen the movie, but I have read the book–the Bible, that is. And in the Bible–specifically, in the gospels of Matthew, Mark, and Luke–the account of the temptation of Christ is definitely included. And every year, on this First Sunday in Lent, we get one of those three accounts as the Gospel reading for the day. This year it’s St. Matthew’s account, from the beginning of Matthew chapter 4, which we will now consider under the theme: “If You Are the Son of God.”

But first let’s set the scene. The beginning of Matthew chapter 4 obviously comes immediately after the end of Matthew chapter 3. And in the last verses of chapter 3, we have the account of Jesus’ baptism, in which the Spirit comes to rest on Jesus and the Father’s voice comes from heaven, saying, “This is my beloved Son, with whom I am well pleased.”

“Into the wilderness.” Adam and Eve were in the Garden when the devil tempted them, and they yielded to his temptations. The nation of Israel, after they came out of Egypt, were coming through the wilderness when they failed their test. And as a result, they wandered for forty years there, in the wilderness.

So now Jesus is going to “re-do” that experience and get it right. Forty days will do the job. “And after fasting forty days and forty nights, he was hungry.”

Adam and Eve were tempted through food, weren’t they? They were tempted to eat of the fruit of that one tree from which the Lord had told them not to eat. Even though God had given them all the other trees from which to eat, the devil tempted them to eat from that one. And it looked so good for food.

The nation of Israel was tempted through food, weren’t they? They kept grumbling about not having the types of food they had back in Egypt, and then they grumbled about the food that the Lord was supplying them with there in the wilderness.

And so now the devil is going to try to tempt Jesus through the avenue of his hungry belly. “If you are the Son of God,” he says, “command these stones to become loaves of bread.” Now, as the Son of God, could Jesus have been able to turn stones into bread? Yes. No problem. It was easily within his power to do so. Indeed, later on in the gospel, Jesus has no problem turning a few loaves of bread into enough to feed thousands of people.

But in that later incident, in the feeding of the five thousand, that’s a whole different context. In that situation there would be nothing wrong in Jesus’ doing so. But here, in the temptation in the wilderness, it’s a different case. This is where the question of Jesus’ identity as the Son of God comes into play. Notice that the devil says “If you are the Son of God,” etc. 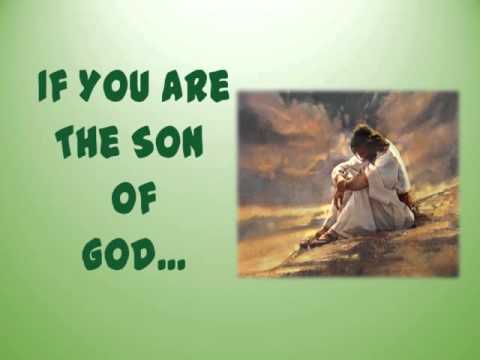 Now I should point out something here about how this phrase is stated, “If you are the Son of God.” About this “if” clause: There are a couple of ways to state an “if” clause in the Greek. One way would be to write it so that it means, “If you were the Son of God, which you aren’t, you could turn these stones into bread.” But that’s not what the devil is saying here. There’s a way to write it with that meaning in the Greek, but this isn’t that. The devil is not denying the fact that Jesus is the Son of God. No, he concedes that Jesus is the Son of God, which Jesus had just heard being affirmed by the Father at his baptism.

But the devil’s approach is more subtle and goes something like this: “OK, Jesus, you just heard the Father call you his beloved Son. But if you’re so ‘beloved,’ then why is he letting you starve out here in the wilderness? You deserve better than that. Look, you are the Son of God! Use that! You know you can change these stones into bread. What would be so wrong with that? Food is a good thing. And you need it, don’t you? So go ahead, turn those stones into bread. You’re God’s Son, after all.”

You see, the devil is pretty crafty and cunning in his temptations. He doesn’t usually take a head-on approach. More often, he comes at things from the side, knocking down our barriers little by little. It’s a more subtle approach that the devil prefers. So here the temptation for Jesus is to use his status as God’s Son for his own benefit, to satisfy his own desires, rather than to do the will of the Father who sent him. “If you are the Son of God,” the devil says. In other words, You’re the Son of God, but what kind of a Son are you going to be? How are you going to use that status? That was the nature of the temptation.

How does the devil work on you? What does he whisper in your ear? I’m guessing he doesn’t usually come right out and say, “Listen, Christian, renounce your faith, curse God, and come join me in hell for eternity.” No, that would be a little too obvious, wouldn’t it? Rather, the devil comes at us with soft and smooth and convincing tones: “Listen, Christian, you’re God’s child, aren’t you? And God should want the best for his children, shouldn’t he? So if there’s something you want, something you want to do, you should be able to get it or do it. Within reason, of course. No big sins. No, just to be able to satisfy your desires, that’s all. And look, God is in the grace-and-forgiveness business, isn’t he? So just do what you want, don’t listen to that other voice in your other ear–yeah, just go for it. And then you can repent later on. God will forgive you. You’re God’s child, after all.”

Do you see the nature of the devil’s temptations? Subtle and crafty. No all-out frontal assaults. But more, from the side, incremental breaking-down of barriers. Friends, if you’re like me, you can recognize how often we fall for the devil’s subtle tricks and traps. We’re like our parents, Adam and Eve. We’re like the children of Israel. Unfaithful sons and daughters. Being led down that road, we will wind up being driven out of the Garden, away from the tree of life, being left to die in the wilderness, never entering the Promised Land.

But thank God, Jesus came to rescue us from that death and that judgment. He came as our Champion, our divine Champion, taking on the devil in mortal combat. And Jesus prevailed. To the devil’s very real temptation of turning the stones into bread, Jesus replies, quoting Scripture: “Man shall not live by bread alone, but by every word that comes from the mouth of God.” And so on down the line, through all the temptations. Jesus will be the one faithful Son who gets it right.

You see, the devil is trying to divert and distract Jesus from carrying out the mission on which he was sent, which is to go to the cross for our salvation. If the devil can divert Jesus right at the outset of his ministry, so much the better. That’s what this is about: to see what kind of a Son Jesus will be. The faithful and obedient one? Or a Son who will use his power for his own benefit, instead of doing the will of his Father?

Thank God, Jesus passed the test. And he would continue on that faithful course, all the way to the cross. For instance, when Peter couldn’t understand the Passion prediction Jesus gave about going to Jerusalem to suffer and die, he told Jesus, “No, no, Lord, certainly nothing like that for you!” But Jesus told him, “Get behind me, Satan!”–echoing what Jesus told Satan himself here in our text. And even when Jesus was hanging on the cross, and people were taunting him with words just like the devil’s here–“If you are the Son of God, come down from the cross!”–no, Jesus would not succumb to that temptation, either. The cross was what Jesus was sent to do, and he would not be diverted. Instead, he was determined. Jesus is the faithful Son of God, who does his Father’s will. Jesus indeed is the very Son of God, by whose shed blood your sins are forgiven, so that now you will not die forever, but rather you will live.

Satan, you were very crafty with your “If you are the Son of God” approach. Yes, Satan, Jesus is the Son of God. But he will not use his status as Son in a way that will take him away from his mission. He’s got a job to do. Which is to be the Savior of all the people here in this room. And of all the people in this world. Jesus knows his identity. He is secure in it, and you, Satan, you will not be able to shake him from it.

And now you, dear child of God–you, dear Christian here today: Rejoice that you have such a Savior. Take refuge in him. Realize who you are in Christ. Your identity is wrapped up in him. You are forgiven, for Christ’s sake. You have life in his name. And you will also find strength to resist the devil, when he comes whispering in your ear. Remember who you are, and whose you are. You are a child of God, called to use your status for God’s purposes. You are a child of God–because Jesus, the Son of God, used his sonship for your salvation.