“To us a child is born, to us a son is given.” And his name is Jesus, of course. This child born in Bethlehem at Christmas. This son–Son of God, son of Mary–this son given to us to be our Savior. But what happens when Jesus is born? What happens when God gives his Son to the world? A whole bunch of bad stuff, apparently. A king goes crazy. A family has to flee to Egypt. Babies are killed. Mothers are weeping. And this is a gift?? Some kind of Christmas! Yes, it is, actually. As we shall see this morning, under the theme, “Rachel Weeping, and a Son Called out of Egypt.”

So Jesus is born, in Bethlehem, at Christmas. Swaddling clothes, heavenly host, you know the story. Some time later–we’re not sure how much later–some wise men from the east come looking for him. They check in at Jerusalem, at the king’s palace, to find out where they might find this one born “king of the Jews.” They mean the Messiah, the great promised king prophesied from long ago. But Herod, the king at the time, doesn’t like to hear about any “king of the Jews” who might supplant him. This disturbs him. He wants to get rid of any potential rival, infant or otherwise. So he decides to dispatch some troops to go to Bethlehem and slaughter all the baby boys. He even puts in a little “wiggle room” in the age of the babies, just to make sure the soldiers get the right one. Herod doesn’t care. He’ll do whatever it takes to stay in power. He’s a pretty ruthless individual. We have other historical accounts from outside the Bible that tell us that Herod was that sort of a person.

So the soldiers go to Bethlehem and carry out their orders. We don’t know how many baby boys were murdered. Bethlehem was indeed a “little town,” so it may not have been that many. Still, though, the act was no less horrendous. Innocent babies, martyred and murdered, because of the insane jealousy and lust for power of an evil man.

Think of the grief and mourning of those poor parents whose children were killed. Matthew the gospel writer does. And he quotes an Old Testament prophet as he does: “Thus was fulfilled what was spoken by the prophet Jeremiah: ‘A voice was heard in Ramah, weeping and loud lamentation, Rachel weeping for her children; she refused to be comforted, because they are no more.’”

What’s this “Ramah” and “Rachel” business? Where is Ramah? Who is Rachel? Why bring them into the story? Matthew mentions Ramah and Rachel because he is saying that this massacre in Bethlehem “fulfills” what was spoken by Jeremiah. How so?

Here’s how. A long time earlier there was a previous terrible massacre in Israel. Babies were killed at that time, too. It was when Judah was conquered by the Babylonians, and Jerusalem was destroyed. Mass destruction and death, Israelites killed by the thousands, including many innocent children. Ramah was one of the cities thus affected. And Rachel–well, Rachel stands poetically for all those grieving mothers of Israel, since the historic Rachel was one of the “founding mothers” of the nation, centuries earlier.

So Rachel is weeping. She’s mourning, grieving, over the loss of her children. Maybe you’ve experienced grief and loss, too. You’ve been grieved, maybe not by the tragic death of a child–although I wouldn’t be surprised if that has happened to some of you here–but perhaps you’ve been grieved about how your child has gone astray in life, falling into wrong behaviors, falling away from the church, and so on. Those sorts of things hurt, too. Other losses: The loss of a spouse, whether through death or divorce. The loss of a job, economic distress. The loss of your health–aging, disease, chronic illness.

So much pain. So much weeping. Some of it, we even bring on ourselves, by our own bad choices in life. The sin we indulge in leads us down some dark alleys into dead ends. We end up hurting ourselves and hurting others besides. Pain and hurt and weeping all around. And sometimes we grow so dull to the pain that we don’t even weep anymore.

Is there hope for us? Is there hope for weeping Rachel? There is. You know, what Jeremiah said about Rachel weeping was not all he had to say. Look at the verses that follow. You’ll see them there on your insert, as part of the Introit of the Day. Jeremiah 31:15-17. We’ve already heard this verse: “A voice is heard in Ramah, lamentation and bitter weeping. Rachel is weeping for her children; she refuses to be comforted for her children, because they are no more.” But then notice what the Lord, through Jeremiah, goes on to say: “Keep your voice from weeping, and your eyes from tears, for there is a reward for your work, declares the Lord, and they shall come back from the land of the enemy. There is hope for your future, declares the Lord, and your children shall come back to their own country.”

Yes, there is hope for your future, weeping Rachel! There is hope for you, all you here who lament your losses. You do have a future to look forward to! And it is all tied up with the child the soldiers did not kill that bad day in Bethlehem, the one that got away, the one whose parents fled and took him to Egypt for a while, namely, Jesus. He is the child who “comes back from the land of the enemy”–in more ways than one.

“Out of Egypt I called my son.” Matthew says that about Jesus. And again, he’s quoting an Old Testament prophet, this time Hosea. Matthew says that Jesus being taken to Egypt and then coming back again “fulfills” that prophecy, too. Lots of “fulfilling” going on here in the birth and infancy of Jesus. That verse in Hosea about the Lord calling his son from out of Egypt? Initially it was talking about the children of Israel, who collectively were the Lord’s “son.” The Lord had called them out of Egypt and brought them out of bondage into the Promised Land. Well, now Matthew is saying that Jesus fulfills that story. Jesus replays, “recapitulates,” the history and experience of Israel. He’s like “Israel reduced to one.”

And so it is. Jesus is the one true and faithful Son of God. He is true to the Father’s will, whereas Israel so often was not. Like we so often are not. But Jesus is. He has come to do the will of the Father who sent him. Jesus perfectly fulfills what Israel was supposed to be and what we are supposed to be. He is our substitute, in life–and in death.

While Jesus was spared as a baby boy in Bethlehem, there would come a day when he would not be spared. This was his destiny. This was his mission. This was why he came at Christmas. To go the cross on our behalf. There he would bear all the grief and pain and loss of all the weeping Rachels who have ever lived. There he would bear all the sins of all the power-mad Herods–and yes, of all the milder sinners, such as ourselves–all the sins of the world. Christ’s blood shed on the cross covers and redeems all the Holy Innocents slaughtered in Bethlehem, and makes them–and us–wholly innocent in God’s sight.

“Out of Egypt I have called my son.” That’s God talking about ancient Israel. That’s God talking about his Son Jesus Christ. And now, through Christ, that’s God talking about you. You are God’s child, by faith in Jesus Christ and baptism into his name. So your life and your destiny are now tied to Christ. God has called you to be his son, his daughter. He has called you to himself, to live according to the calling he has marked out for your life. It is a life of purpose, of fulfilling your mission in life, whatever shape the particulars of that may take. But we can know a few things of what that life will definitely include. It will include being set apart to belong to God. You are a holy child of God, baptized, washed and forgiven and filled with the Spirit. God’s has called you to a life of faith, of trusting in him and growing in faith and living for him. This means a life in the church, the family of God, where together we are built up in the faith and live together as a community of love and service. It means sharing that love with those outside the church, so they too can experience the love of God and be drawn to find out more.

“Out of Egypt I have called my son.” And one day God will call you from this Egypt, this vale of tears, and call you to himself. But death will not be the end for you. No, weeping Rachel, you have a future ahead of you, and it is glorious! There’s going to be this giant homecoming one day. A giant homecoming, when all the lost children will return and be together forever. Where no Herod can cause us any grief any longer. How we long for that day! And rest assured, Rachel, it will come. Christ will come again and call us all home.

Yes, on that day it will be said: “Behold, the dwelling place of God is with man. He will dwell with them, and they will be his people, and God himself will be with them as their God. He will wipe away every tear from their eyes, and death shall be no more, neither shall there be mourning, nor crying, nor pain anymore, for the former things have passed away.”

So, weeping Rachel, wherever you are: It’s OK to weep now over your losses. The Lord understands your pain. But don’t forget the hope! This hope is sure, it’s secure, because it’s connected to Christ, the Son whom God called out of Egypt. 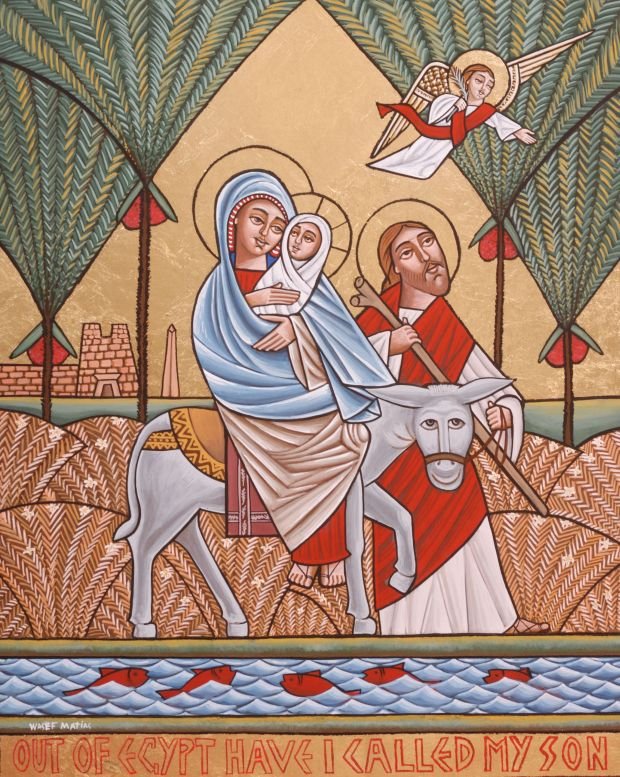