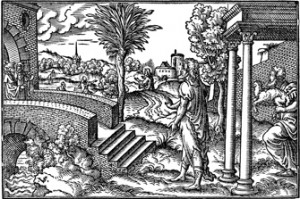 Virgil Solis (1514-1562), “Malachi”
Malachi speaks to the people about the return of Elijah. In the background, John the Baptist points to Jesus.

A burn is a bodily injury resulting from exposure to heat, caustics, electricity or certain radiations. Burns result in varying degrees of skin destruction and bleeding, ranging from the formation of blisters up to the severe charring of tissues from the first through fourth degree. A burn can be as minor as a sunburn and as severe as to affect structures well beyond the skin, such as muscle and bone. Burn damage can even be so severe that you feel no pain at all.

The prophet Malachi warns us about what we might call a fifth degree burn, something much more intense and painful than any sort of burning we could ever experience in this life:

For behold, the day is coming, burning like an oven, when all the arrogant and all evildoers will be stubble. The day that is coming shall set them ablaze, says the Lord of hosts (Malachi 4:1).

The most severe burn you could ever experience in this life pales by comparison to the burning Day of the Lord. Malachi describes what it would be like to be continually burned alive with no relief. He describes a eternal burning in the Lake of Fire (Revelation 21:8), the fiery furnace, where the only sound you hear is weeping and gnashing of teeth (Matthew 13:15). The sound of hell is eerie, quite unlike anything else in this world. Take a moment and try to imagine what hell sounds like: first, think of a person weeping. Now add the faint click of teeth in the background. Maybe some wailing for good measure. That’s how the Bible describes the sound of hell. It’s not pleasant, and it never ends.

When compared to hell, being burned alive is like being slightly uncomfortable on a hot summer day. When faced with the choice to be burned alive or deny His Lord and risk burning eternally in hell, the early Christian martyr Polycarp chose bodily death. Born in 69 AD, Polycarp had both been instructed by the apostles and spoken with many others who had seen the Lord (Adversus Haereses: 3:3:4). It seems Polycarp had taken our Lord’s words to heart: And do not fear those who kill the body but cannot kill the soul. Rather fear him who can destroy both soul and body in hell (Mat 10:28).

We are given an inside look at what Polycarp went through in the works of the Apostolic Fathers (The Martyrdom of Polycarp). Just prior to his death, the Romans official told Polycarp:

“Reproach Christ, and I will set you free.” But Polycarp said, “86 years have I served him and He has done me no wrong. How can I blaspheme my King and my Savior?… You threaten me with fire which burns for an hour, and is then extinguished, but you know nothing of the fire of the coming judgment and eternal punishment, reserved for the ungodly. Why are you waiting? Bring on whatever you want.”

When they went to nail Polycarp to the stake, he said, “Leave me as I am, for He who gives me strength to endure the fire will enable me not to struggle, without the help of your nails.” And then Polycarp prayed this prayer:

“O Lord God Almighty, the Father of your beloved and blessed Son Jesus Christ, by whom we have received the knowledge of you, the God of angels, powers and every creature, and of all the righteous who live before you, I give you thanks that you count me worthy to be numbered among your martyrs, sharing the cup of Christ and the resurrection to eternal life, both of soul and body, through the immortality of the Holy Spirit. May I be received this day as an acceptable sacrifice, as you, the true God, have predestined, revealed to me, and now fulfilled. I praise you for all these things, I bless you and glorify you, along with the everlasting Jesus Christ, your beloved Son. To you, with him, through the Holy Ghost, be glory both now and forever. Amen.”

O that God would grant us such faith as to be willing to suffer all, even burning and death, rather than deny our Lord!

The burning of the body doesn’t even begin to compare to the burning the prophet Malachi describes. It is a day that burns like an oven. But your Lord does not want you to find yourself trapped in that oven. So the prophet continues:

Behold, I will send you Elijah the prophet before the great and awesome day of the Lord comes. And he will turn the hearts of fathers to their children and the hearts of children to their fathers, lest I come and strike the land with a  decree of utter destruction (Malachi 4:5—6).

This is what Advent is all about. We are preparing for the coming of our Lord. But  sin is like gasoline, and our Lord is like a match when it comes to sin. Make no mistake, there’s no other solution to sin other than to burn it up. You can either be burned up now, or you can be burned for all eternity.

To be burned up now is to repent. Repentance is not a pleasant thing. To truly admit sin, to admit guilt, is to experience something not much unlike burning. It’s to be reduced to nothing before God and man. This is why three of the most difficult words to say in the English language are: “I was wrong.”

We’d much rather live in denial. When we apologize to people, we’d much rather hear them say, “Oh, that’s okay” than “I forgive you.” We’d rather be excused than absolved. If we need absolution, it means we were guilty. We don’t like being guilty. Defendants await the judge’s verdict, often with great anxiety. The words, “innocent” and “not guilty” belong to two very different worlds. Imagine you’re on trial for the death penalty. To be absolved, declared innocent, is to experience relief like none other. We might well prefer to be set on fire than to experience the feeling of shame that comes from being exposed as guilty.

The shame of the guilty verdict burns us like quite nothing else in this life, so we try to avoid it at all costs. We justify everything we do. When others are critical, we become defensive. There are few things in life that are harder than admitting guilt. It burns. Adam blamed both Eve and God, and Eve blamed the serpent.  Nobody ever wants to take responsibility, to admit guilt. When we think we can “get away” with something, that’s what we usually try to do.

But by the grace of God, sometimes we realize the burn of our guilt is greater than the burn of repentance. The only thing more painful than confessing guilt is concealing it. Sometimes the burn of guilt finally leads us to seek relief the lake of repentance. Sinners are like frogs in a boiling pot, being cooked alive by our own sin. Relief is found in confession and absolution.

And what a blessed relief Holy Absolution is! David describes the burn of  unconfessed guilt in Psalm 32 by saying, “When I kept silent, my bones wasted away through my groaning all day long,” (v. 3). Unconfessed sin causes burning of various degrees. Sometimes it’s acute, other time’s its the dull ache of scars from long ago, and other times it’s so severe you can’t even feel the pain. But make no mistake: whether you feel guilty or not, your bones waste away just the same.

But God does not leave you or your bones to waste away in your sin. He sent John the Baptist to call sinners to repentance and He still sends John the Baptists into pulpits today. There’s nothing the relief of being able to name sin in the presence of another and hear the words, “You are forgiven.” Luther called individual confession and absolution “a cure without equal for troubled consciences.”

Pastors have been called to hear confession and declare absolution in the stead and by the command of Christ. One of the reasons Jesus has sent me here is to give you a safe place where you can name those things that cause you to feel guilt, and then to hear, as from Christ Himself, that yes, even that sin is forgiven you, with the full assurance that your sin will never be divulged to another human being, period. To confess sin and hear the Absolution is to hear God’s verdict on you: not guilty. You heard this absolution at the beginning of the Divine Service, and you are welcome to hear it spoken as often as you like personally via individual confession and absolution.

Repentance can be painful, but hearing God’s Word can also be painful.  As it is written: Is not my word like fire, declares the Lord? (Jeremiah 23:29).  Fire burns, which is why we need to be very careful around it. Sinners, for fear of being burned by God’s Word, tend to keep it at arm’s length. Rather than take the risk of being burned, we slip into becoming lukewarm. But the Lord’s warning to the Church at Laodicea applies also to His Church here in Summit. He spits the lukewarm out of His mouth. He would much prefer you to be cold or hot to lukewarm (Revelation 3:15). Confess Christ boldly or curse Him to His face. There is no middle ground; He says, Whoever is not with me is against me, and whoever does not gather with me scatters (Luke 11:23). God has no use for the lukewarm.

God’s Word has the destructive properties of fire, but it is not to be avoided at all costs. There is a good and proper use of fire; say, for cooking. So it is with God’s Word. It refines you. As Malachi says in chapter 3:

But who can endure the Day of His coming? And who shall stand at His appearing? For He is like a refiner’s fire, and like washers’ soap:

And he shall sit as a refiner and purifier of silver: and he shall purify the sons of Levi, and purge them as gold and silver, that they may offer unto the LORD an offering in righteousness. (Mal 3:2-3)

God’s Word refines and purifies. This isn’t always pleasant, but Jesus will never leave you in agony. He has poured His soothing Word over all of your wounds in Holy Baptism. He has suffered the full agony of hell’s fire on the cross for you. He allowed Himself to be burnt up in the blazing oven of God’s wrath, so that He might bring His salvation to you, O people of Zion.

Though we wouldn’t stand to be unjustly accused, that’s exactly what Jesus did for you. As a lamb before its shearers is silent, so He opened not His mouth (Isaiah 53:7). He certainly could have; but Jesus didn’t justify Himself before His accusers so that He could justify you before God.

And behold, your salvation comes, in, with and under the bread and the wine. 911 is great for a lot of emergencies, but they can’t do a darn thing about the Day of the Lord. The Great Physician gives you to eat His flesh and drink His blood, to feed you with the best medicine of all and provide relief for all that ails you.

Who can endure the Day of His coming? And who shall stand at His appearing? You, dear saints of Zion. By God’s grace, you.