Today in the Christian church year is the Feast of St. Michael and All Angels. It always falls on September 29, and since this year that date falls on a Sunday, that’s why we’re celebrating this festival today.

Angels, thus, will be topic of this sermon: who they are and what they do and why we thank God for them. And we’ll even get into who this mysterious figure St. Michael is a little bit. So with that by way of introduction, we begin our theme today, “St. Michael and All Angels: Messengers, Worshipers, Warriors.”

First of all, we should explain just who angels are, their nature, what kind of beings they are, according to Holy Scripture. We can begin by saying that angels are created beings. Sometime during the six days of creation, the Lord God created these beings we call angels. They are unseen spirits, doing the will of God–“ministering spirits,” the Bible calls them. “God’s secret agents,” you could almost call them: “secret,” in the sense that we human beings rarely have ever been allowed to see angels, to know exactly what they are doing at any given time; and “agents,” in that the angels act at God’s direction and by his authority.

The Bible is clear throughout that there is an unseen spirit world, with lots going on that we mere mortals are not privy to. We may see the results of this unseen spiritual activity in our world–in human history, in the rise and fall of nations, in the protection and safety of the church, or even of individual believers. We may see the results, but we do not see the angelic activity itself. Sometimes at key moments in salvation history God did let humans catch a glimpse of what’s going on in the spirit realm, and we have those moments recorded for us in the Scriptures. And that’s the only place where we have reliable information about angels, that is, in the Bible. Do not base your theology of angels on what you have seen in TV shows or movies or what some person claims an angel told them in a private revelation. No, only in God’s Word do we get the solid truth about angels.

And the truth about angels, as we survey the Sacred Scriptures, we can briefly summarize in three words: messengers, worshipers, and warriors. We’ll take these one at a time.

One, angels are messengers. In fact, the word “angel” means “messenger.” The Greek word “angelos” can be translated as that, “messenger.” That’s the word that used to identify these unseen spirit beings, because often when we encounter them in the Bible, that’s what they’re doing: delivering a message. God sent angels to deliver messages to man, particularly at critical moments in God’s dealings with mankind.

For example, the angel Gabriel was sent, first to Zechariah, to announce the coming birth of John, the forerunner of the Lord, and then to the virgin Mary, to announce that she was to give birth to the Christ child himself. And when she did, on that Christmas night, an angel appeared to some shepherds out in a field, to let them know that that night a Savior had been born to them, which is Christ the Lord. Then, fast forward, and we come to the resurrection and ascension of our Lord. Again, angels are sent to deliver the message. The two young men at Jesus’ tomb–they tell the women, “He is not here. He is risen, just as he said.” And forty days later, at Jesus’ ascension, they tell the disciples: “Why do you stand staring up into the heavens? This Jesus will come again in the same way you saw him go up into the heavens.” Key moments in the life and work of our Savior Jesus Christ, and you find angels coming to deliver a message, explaining the moment to the persons who witness it. Angels are God’s messengers.

Second, angels are worshipers. Go back to Christmas night. After the one angel delivers the message to the shepherds, then a whole host of angels light up the sky and sing the praises of God: “Glory be to God on high, and on earth peace, goodwill toward men.” That’s worship. And in the throne room scenes of Revelation, angels are leading the praises of God, just like they did back in the temple scene of Isaiah, where they were singing “Holy, holy, holy Lord God of Sabaoth; heaven and earth are full of thy glory.” Notice, by the way, how the angels, in their worship of God, set the pattern for the worship of the church. In the historic Christian liturgy, the main canticle in each half of the Divine Service is based on one of these songs of the angels: the Gloria in Excelsis in the Service of the Word; and the Sanctus in the Service of the Sacrament. Angels are worshipers, and we in the church follow their lead and join in their worship.

Angels are messengers. Angels are worshipers. Third, angels are warriors. Warriors? Yes, warriors. Now this may disturb our image of angels as being rather soft, even effeminate, creatures, or else as cute little cherubs with rosy cheeks. No, those are not biblical ways of looking at angels. In the Bible, when angels are described, they can be fiery and frightening. Rather than “Touched by an Angel,” more likely would be “Torched by an Angel.” When angels appear to human beings, they startle and scare the people, so much so, that the angels invariably have to say, “Fear not,” “Do not be afraid.”

Angels are fearsome warriors. They do battle for God. They are his troops that he sends out to do battle for us, on our behalf, against any evil forces that would harm us, whether seen or unseen. God’s angels are our guardians and protectors, guarding the church as a whole, protecting particular churches in various places, and even guarding individual Christians. They guard us against all types of harm, physical and spiritual. We can’t say for sure that every individual Christian has his own guardian angel assigned to him, but we can say–and say it with thanksgiving and confidence–that God does send his angels to watch over us from day to day. Luther has it right when he has us pray in the Daily Prayers, “Let your holy angel be with me, that the evil foe may have no power over me. Amen.”

Now this brings us to St. Michael and the special focus of this day, which is, how God guards and protects us with his angels, and in particular, how St. Michael the Archangel does battle for us so that the old evil foe, the devil, does not have any power over us.

St. Michael is a rather mysterious figure in the Bible, only mentioned a few times. You have most of those mentions in the readings today from Daniel and Revelation. The name Michael–“Mi-cha-el” in the Hebrew–means “Who is like God?” That’s a good question. Indeed, who is? No one can match God in his power and majesty. But Michael the Archangel, as God’s appointed agent, acting with his authority, is one who is like God in his might. He is the one whom God uses to throw down Satan from his power over humanity.

Now we need to ask: How can Michael do this? On what basis? And here is where the gospel in all of this comes in. The reason Michael can defeat the devil in battle is because Christ has defeated him on the cross.

The message from Michael today is this: We win. We Christians win the final victory because Jesus has redeemed us from all sin, from death, and from the power of the devil. Remember, this was promised right from the beginning, when God cursed the serpent and told him that the woman’s seed would strike him in the head, dealing him the fatal blow. This the woman’s seed Jesus did when he was nailed to the cross. For that took away the devil’s power over us. Our Champion Jesus took our sins and carried them to the cross and suffered and died for your sins, my friend. This took away the devil’s ammunition against you. The devil has nothing left to charge you with before God. Jesus already served the death sentence for you. Take that, Accuser! You are defeated! In your face! Jesus goes and declares his victory over hell. Look, now he rises from the dead on the third day, showing that his mighty life has power over death. You will share in this eternal life, you who have been baptized into Christ. Jesus’ victory is yours. We conquer by the blood of the Lamb. 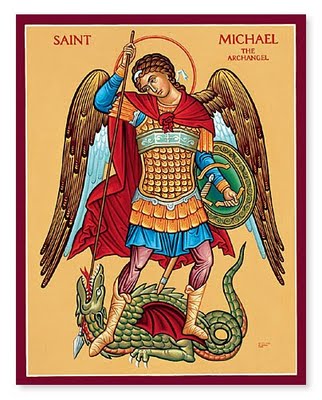 Now God dispatches Michael and the angel army to do the final clean-up operation. These mighty warriors win the day. Your future is secure, dear Christian. Walk on in, the way is clear. And God will send his angels to see that you get there. “He will command his angels concerning you to guard you in all your ways.” No evil shall prevail against you.

Today on this Feast of St. Michael and All Angels, we have heard that angels are unseen, created beings, ministering spirits sent to do God’s will. They are messengers, they are worshipers, and they are warriors. They serve and protect. They serve God and protect us. The power they have to throw down Satan and guard the church comes from the victory Christ has won for us by his death and resurrection. And so all of this is something for us to worship and praise God for, namely, the ministry of St. Michael and All Angels.