Should a congregation, synod, or denomination adopt a translation that is only intended to be in circulation for 10 to 15 years? 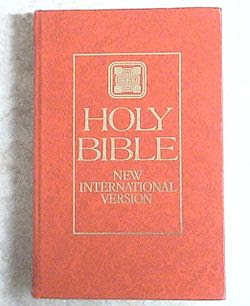 The New International Version, a translation produced by Biblica is intended by its editors and translators to be updated for the sake of modernizing the language in just such a span of time.

A new NIV was in the works with plans to publish in 1997. But that translation failed because the Church did not accept the theology of this translation in large part due to its use of inclusive language.

The 1997 edition was revised and released in 2002 with the full Bible published in 2005 as Today’s New International Version. This version also failed to meet the approval of the Church due to theological problems also stemming in large part from the use of inclusive language.

In 2009 Biblica began revising the TNIV, changing the name back to The New International Version and adding the year of publication: NIV 2011. This revision still has much of the inclusive language of the previous versions but also incorporated other changes to the text.

The practice at Biblica has been to make the old versions disappear. That means one can no longer purchase a 1978 or 1984 version, nor can one access these versions online.

If it had not been for the resistance of the Church to the version of 1997 the older 1984 edition would have disappeared by 2001 due to Biblica’s publication policy.

This means that the intended maximum lifetime use of the 1984 edition was 15 years.

If a congregation or synod chooses to adopt a translation that is intended to change so rapidly it faces the problem of theological review of the new versions. This is time consuming–and expensive because of the time.

Choosing such a temporary translation also means great expense in many other areas. Pew Bibles, confirmation books, catechisms, hymnals, liturgical books, Christian Day School curricula, and any other publications based on the old version have to be edited and re-published to fit the new version.

This period of editing and re-publishing can take 5 years or more. Which means that the useful life of those books is cut down to between 5 and 10 years.

Perhaps this is good business for the publishers. But it is a terrible practice for a congregation.

Grandparents who had memorized passages for Christmas, Easter, and confirmation class face the problem of having the words of Scripture changed on them. They no longer are able to speak the same truths in the same words as their children or grandchildren. They are even made to stumble over the words used in their weekly worship which were meant to become part of them like breathing itself.

This post is not meant to be an argument against making a better translation. What I intend is that congregations be aware of some of the ways they are setting themselves up for unnecessary problems and expense by not taking into account the publication cycle of a transitory Bible like the NIV.

I would like to suggest that stability in translation from one generation to the following generations is more edifying to the families, congregations, and the Church in general. I believe this has been demonstrated both from a spiritual and theological perspective (as exampled by the theological failures of so many revisions of the NIV) as well as from a simple economic perspective. The economic considerations are also worthy of considering in a time when many congregations find it difficult to pay for maintaining their church and their servant of the Word.