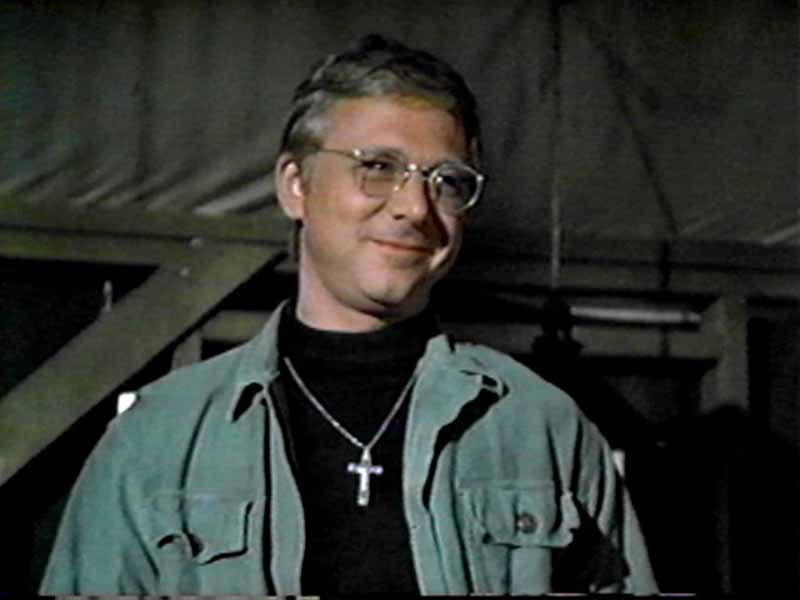 In the TV show M*A*S*H, Fr. Mulcahy wonders if he really is useful in his pastoral/priestly duties, compared to “Hawkeye” and “Trapper” and the rest of the talented surgeons of the 4077.

In one episode, in order to feel useful, Fr. Mulcahy volunteers for a dangerous task. The Korean War era helicopters could only take two wounded soldiers at a time, one on each side of the helicopter.  When there was only one wounded, the pilot would use a dummy for balance.  The pilot did not have a dummy.  Fr. Mulcahy volunteered as such.  Colonel Potter was not pleased. Mulcahy explained his feelings of inferiority as a priest.  Hawkeye and the other surgeons tried to comfort Fr. Mulcahy that he was indeed useful.

I forget how that episode was resolved. In the show, one rarely sees him saying Mass or even talking about it or preaching.  He does hear confessions but usually for the humor in it.  He never evangelizes the Korean villagers. He never baptizes.  He does counsel and given the time of the sitcom, pastor as therapist was quite popular in many denominations.

In Jaroslav Pelikan’s  Bach Among the Theologians, he described the  Enlightenment (aufklarung), in Germany.  The Enlightenment was also a philosophical and theological assault on confessional orthodox Lutheranism which the philosophes considered to be non-rationalistic, impractical and superstitious.   The Enlightenment was the beginning of the “culture wars”.   Many pastors accepted the critique by changing from teaching doctrine and presiding and the like in order to adapt to the  zeitgeist of the ‘new’ age of Enlightenment, as Pelikan described it:

A recent study of the theological curriculum and clerical morale in eighteenth-century Germany has assembled a vast amount of documentary and anecdotal evidence about what it aptly terms “clerical utilitarianism’ and the pressure that this utilitarian Rationalism put upon the church and the clergy to justify themselves before the forum of usefulness and practicality. “Preaching, the administration of the sacraments, and pastoral care were not sufficient to legitimate the ministry. Ministers were pressed into service as Volkslehrer and even teachers in elementary school, with emphasis on practical crafts like cobbling and blacksmithing, childrearing and home economics. The pulpit itself had to meet these criteria, and we have sermons for Palm Sunday that deal with the danger of tearing branches from trees just when the sap has begun to rise. Whatever did not point a practical moral lesson could be dismissed, for the way the pastor could make himself useful was “by helping the farmer to follow a better plan of life, by replacing superstitious quack medicines with truly effective remedies, and by giving prompt aid to those suffering from external lesions or wounds.”  He could provide paralegal advice as well as pars-agricultural and paramedical assistance.

This may seem almost quaint to us, even humorous, but there really is nothing funny about it.  I do not know enough of the history to trace this “clerical utilitarianism” in the ensuing centuries to our day. It seems to be with us in another virulent form as we try to grow the church, build the kingdom in response to declining numbers and the assault of the post-Enlightenment omnicompetencies and immoralities. Preaching, teaching, administering the Sacraments, counsel and conversation, prayer are simply not enough. Many pastors feel the need to be “useful”.  I know the feeling. As a pastor I think many a minister suffer from the  Father Mulcahy Syndrome.  Pastor and something else: therapist, CEO, church growth guru, social activist, community organizer,  and the like and then the pastor can assuage his conscience that he is indeed “useful”. These vocations have been and are vigorously promoted by denominational headquarters.

The clerical utilitarianism, or the Father Mulcahy Syndrome is alive and well. It is reflected in the question put to me by at least two call committees: “Pastor, how will you grow our church?”  Like I had some tricks up my sleeve to work ministerial magic or divine power.  Denominational offices churn out all sorts of “models of ministry” to “grow the Church”.  It is all quite “ecumenical”. They are all well intentioned in their unchecked righteousness to “build the Church”, i.e. get new members.  We don’t want to ‘worship’ 200 but 2,000 on a Sunday. Twelve is out…let alone 2 or 3.

The Lord’s promise to Peter and the disciples is clear: I will build My Church. (St. Matthew 16: 17).  Each of the baptized are like living stones, being built, passive tense,  into a “spiritual house” (1 Peter 2: 5)  So pastors don’t have do anything?  Once when asked that question, how I would “grow the church”, I had at the ready the text, “I planted, Apollos watered, but God gave the growth”(1 Corinithians 3: 6).   So, pastors do not have do anything?  Quite the opposite:  The Lord and His Church calls pastors to preach and teach the Word of God, Scripture and Sacrament, so that sin deluged sinners are soaked in His forgiving Word.  Satis est. It is enough. And to the true unity of the Church it is enough to agree concerning the doctrine of the Gospel and the administration of the Sacraments. (The Augsburg Confession, Article XIV).

The Word of God is enough in the pulpit, at the Altar, in the classroom, in the hospital room, at the coffin, in the conference room and living room, on the street…and all of those times and places are the battle line of the Kingdom breaking in through the proclamation of the death and resurrection of Jesus Christ.  There the prowling lion seeks someone to devour.  This is labor enough as a pastor will tell you, but it is not a self-chosen work to ‘save the church’, as fellow Americans work themselves into a froth, “saving the earth” or “saving the nation”. From The Formula of Concord, The Epitome, Article VI, The Third Function of the Law:

On account of this Old Adam, who inheres in people’s intellect, will, and all their powers, it is necessary for the law of God constantly to light their way lest in their merely human devotion they undertake self-decreed and self-chosen acts of serving God. This is further necessary lest the Old Adam go his own self-willed way.

We do not have to save the Church. We simply can not.   Jesus Christ has and His calling is for His Church to get the Word out.  Putting such expectations of saving a church and a congregation is inviting nervous breakdowns all around:  on the pastor, the church council, the congregation. In terms of this world, yes, I think pastors are useless. The pastor will begin to think that doctrine, prayer, Sacraments have their place but we have to do something, as if the Word will not accomplish that which the Lord purposes for it.  Our pastor feels the need to be useful.  This is a sore temptation to want to feel “useful”.  The world of sin, death and the power of the devil of course thinks the Word and the servants of the Word are useless. Of course!  The devil has no use for Word and Sacraments, for Jesus Christ! The thing is that the devil knows the Enemy’s Word is quite practical, for seeding and nurturing of faith and the fruit of faith, love, His light in the darkness. The devil wants us to be driven by our own plans, not the definite plan of salvation in Jesus Christ (Acts 2: 24). He wants us to succumb to “clerical utilitarianism”!   When I succumb to the Father Mulcahy syndrome, then I am like Father Mulcahy wanting to be a real sweet guy who wouldn’t hurt a fly and play the piano in o-club, liked by everyone, everyone patting me on the back, Good job, Pastor. Or I want to be,

“Faster than a speeding prayer! More powerful than sin itself! Able to leap tall steeples in a single bound! “Look! Up in the sky!” “It’s a man!” “It’s an angel!” “It’s Superpastor!”… Yes, it’s Superpastor, strange visitor from Missouri or Indiana…”

Either way, it is despair or pride, but not faith.

Your pastor needs prayer and encouragement to do the one thing needful, the good portion that will not be taken away:  preaching and teaching the Word written, spoken and incarnate (see St. Luke 10:41-42) so with Mary and all the baptized saints in Christ, and many others yet to be reborn in Baptism, be fed the Bread of Life.