In our six-part sermon series on St. Paul’s Epistle to the Galatians, we have already talked about our changed situation as Christians. For example, last week we heard how we are “Justified by Faith, Crucified with Christ, Redeemed from the Curse.” Now today St. Paul takes us further into understanding our changed status. He says that now, through faith in God’s promise and our baptism into Christ, now we are “Sons and Heirs.”

We’ll take it a verse or two at a time. Our text begins at chapter 3, verse 23. Paul writes: “Now before faith came, we were held captive under the law, imprisoned until the coming faith would be revealed.” Captive, imprisoned–that was our status under the law. Under God’s law, you and I were condemned, convicted, thrown in prison, and sentenced to death. The law says, “Do this, and you will live. Fail to do it, fail to keep God’s law, and you will die.” That was our condition as sinners, law-breakers. We were stuck in jail and couldn’t get out. All our appeals went no place. We were locked up on Death Row with no way out.

Paul then shifts the image somewhat in verse 24: “So then, the law was our guardian until Christ came, in order that we might be justified by faith.” The law was our “guardian.” The Greek word here is “paidagogos,” from which we get our word “pedagogue”–although in the original Greco-Roman context, a “paidagogue” was not so much a teacher as he was a guardian. Let me explain. The word “paidagogos” literally means “someone who leads or guides a child.” In the ancient world, a rich man would assign one of his slaves to serve as the “paidagogue” for his son. That slave would be the boy’s guardian, his escort, to make sure that he got to school safely and that he didn’t run off on his own, as boys are wont to do. The paidagogue was not the teacher, but he made sure the child got to the teacher. And the paidagogue, though a slave himself, was allowed to exercise a certain degree of discipline over the boy, even though the child occupied a higher rank, if you will, than the slave.

So the law acted as our “paidagogue,” to make sure we got to where we needed to go. It exercised a certain degree of discipline over us. But the goal was not to leave us with the paidagogue. In other words, the goal was not to leave us under the law. The goal was to get us to Christ. Which the law has a part in playing. It shows us our need. By maintaining external discipline over us and by exposing our lack of righteousness, the law helps to direct us to where we need to go, which is to Christ, for salvation. The law cannot save, but Christ can, and does. We need to know our need for him, and that is a purpose that the law does serve as our guardian, our “paidagogue.”

But now that Christ has come, and the law has done its job of making sure we see our need for him, now when we hear the gospel promise that Christ has fulfilled the law for us–now we are justified by faith, that is, we are declared righteous before God for Christ’s sake, through faith in him. 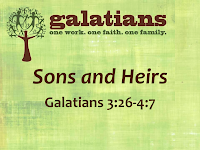 Verses 25 and 26: “But now that faith has come, we are no longer under a guardian, for in Christ Jesus you are all sons of God, through faith.” With the coming of the gospel promise, the message of salvation through faith in Christ, now we are no longer under the guardianship of the law. No longer are we treated as minor children, needing the supervision of a paidagogue, led by compulsion, restricted in our freedom. Now we are treated as sons, full adult sons of God, with all the freedom that comes with that. By the way, when God’s Word here calls us “sons,” that in no way is excluding women. Rather, it is simply a way to emphasize the inheritance that we receive by being joined to God’s own Son, Jesus. 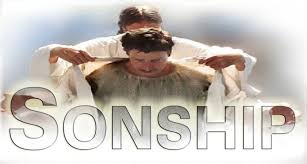 “In Christ Jesus you are all sons of God, through faith.” How so? What happened? Verse 27: “For as many of you as were baptized into Christ have put on Christ.” You were baptized, baptized into Christ. You were united to your Savior, Jesus Christ, in the waters of Holy Baptism. Something great and magnificent happened there, in the font. You were clothed with Christ. His perfect righteousness is the white garment that covers all your sin. This robe of righteousness, Christ’s righteousness, is your daily apparel as a baptized child of God. Christ’s status is your status. You share in his standing as God’s beloved Son. That’s what the Father said at Jesus’ baptism, wasn’t it? “This is my beloved Son, in whom I am well pleased.” Now that you are united with Jesus in your baptism, God says the same about you. You are God’s beloved child.

Verse 28: “There is neither Jew nor Greek, there is neither slave nor free, there is no male and female, for you are all one in Christ Jesus.” It doesn’t matter your background or ancestry or your status in the world. Whether or not you are marginalized in society, you are not marginalized in God’s kingdom. We all have equal standing before God. As justified, baptized Christians, we are all united in Christ and in his church. Our common baptism, our common faith, binds us together as one.

Verse 29: “And if you are Christ’s, then you are Abraham’s offspring, heirs according to promise.” What is this business about being “Abraham’s offspring”? If we go back to the Old Testament, we see in Genesis 12, and repeated several times thereafter, that the Lord God made a covenant with Abraham, a covenant of blessing. God made a promise. He committed himself to Abraham and his descendants, his offspring, to bless them. Which he did. And now, in Christ, the ultimate offspring of Abraham, in whom all the nations of the earth are blessed–now we too come into the blessing, because we have been joined to Christ.

That makes us heirs. We are heirs, receiving as our inheritance all the blessings promised to Abraham. To Abraham was promised that the Lord would make of him a great nation. As heirs of that promise, we receive membership in the kingdom of God. To Abraham was promised God’s perpetual blessing and protection. So God blesses us with every blessing in Christ, and he guards and protects us from all evil. The Lord promised to make Abraham a blessing to others. And so we Christians are called to be God’s channel of blessing to those around us. To Abraham and his offspring was given the Promised Land. And so Christ will lead us into the Promised Land of heaven, to inherit God’s gift of eternal life. All this is our inheritance, dear friends, and we have just scratched the surface.

Chapter 4. We’ve already talked about the minor child being under the supervision of a guardian. So let’s move ahead to verses 4 and 5, which read: “But when the fullness of time had come, God sent forth his Son, born of woman, born under the law, to redeem those who were under the law, so that we might receive adoption as sons.” Wow! What a beautiful passage this is! “When the fullness of time had come”: At just the right time in history, looking at it from God’s perspective. “God sent forth his Son”: This is talking about the incarnation of Christ, God sending his eternal Son into the world, in human flesh.

“Born of woman”: Born of the virgin Mary, in fact, that little baby Jesus was, born in the cattle stall in Bethlehem. “Born under the law”: Jesus was born a Jew, and he kept the law of Moses perfectly, even from infancy. Circumcised on the eighth day, presented in the temple on the fortieth day, Jesus fulfilled the law, the whole thing–the ceremonial law of Israel, the moral law of the Ten Commandments. Jesus did everything the law requires. He loved God with his whole heart. He loved his neighbor as himself. In other words, everything we fall short at, Jesus fulfilled. And he did it on our behalf.

What’s more, Jesus then took the punishment that the law requires, even though he didn’t deserve it. We did, but he took it–in our place, on the cross. Death, under God’s judgment. Now that judgment is lifted from us. Christ took it away. You are forgiven. Your sin is not held against you. As Paul says, God sent his Son “to redeem those who were under the law.” You and I are redeemed. We have been set free from what stood against us and the judgment that hung over us.

To what end? “So that we might receive adoption as sons.” Over 100 years ago, a young man came over on the boat from Sweden and landed in America. His name was Karl Henriksson, although at Ellis Island it got Americanized a bit to “Charles Henrickson.” He settled in Chicago, where he met another Swedish immigrant, a young woman, and they got married. After a while, it became clear that they weren’t able to have any children of their own. So they decided to adopt. At an orphanage in Chicago, there was a little baby boy there who had been put up for adoption for reasons you could probably guess. If Mr. and Mrs. Henrickson had not adopted him, who knows what direction that child’s life would have taken? But the Henricksons did adopt him. He became their son, my father did, a well loved son, a full member of the Henrickson family, with everything that came with that. And I am here today, a Christian, a pastor, honored to bear the name Charles Henrickson, because that little orphan boy back in Chicago received adoption as a son. I can tell you that even in the human realm, it’s a wonderful thing when someone with nothing is adopted into full sonship in a loving family. How much more so when we are adopted into God’s family, the church.

Verse 6: “And because you are sons, God has sent the Spirit of his Son into our hearts, crying, ‘Abba! Father!’” “Abba”: No, we’ve moved on from Sweden. We’re not talking about a singing group from the ’70s. When we say “Abba,” we’re talking about the intimate access we have now to call upon God as our dear Father. “Abba” is the Aramaic equivalent of a little child saying “Papa” or “Daddy.” That’s how warm and personal this relationship is now that we have as God’s children. Jesus even teaches us to call upon God in prayer as “Our Father,” and to trust in our Father as the one who cares for his children and their needs more than he cares for the beautifully clothed flowers or the well-provided birds. What a joy it is to know that we are children of the heavenly Father!

And so Paul concludes: “So you are no longer a slave, but a son, and if a son, then an heir through God.” Sons and heirs, that’s who we are. No longer slaves or outsiders, now we are part of God’s family, insiders. We have a bundle full of promises and blessings, and they are all ours in Christ, and it will take an eternity to enjoy them. All you who are baptized, all you who trust in Christ–you, dear ones–your status has changed. You are sons and heirs.