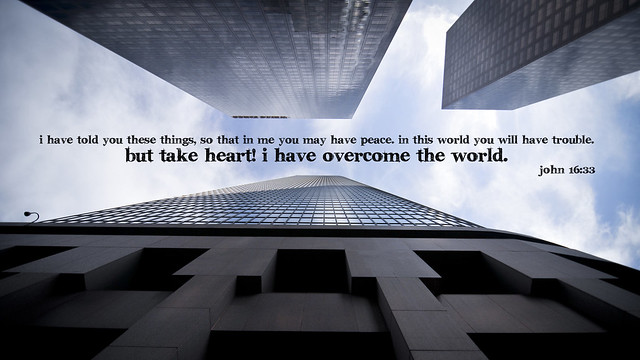 Hear again the words of Jesus at the end of John 16, verse 33: “I have said these things to you, that in me you may have peace. In the world you will have tribulation. But take heart; I have overcome the world.” This is our text.

We’ll start with the matter of having tribulation. “In the world you will have tribulation,” Jesus tells his disciples. Let’s unpack that a bit. “In the world”–meaning, as we live our life here in this world, in the midst of a world system that is aligned against God and his ways and against his people, the church. The world is a hostile environment for Christians. We are in the world, but not of the world. We don’t share in its values. The church is always counter-cultural, in whatever culture we find ourselves, because in every society there are always aspects of it that run counter to God’s Word, and therefore the church must run counter to the culture. The world’s values prominent in our culture not long ago exalted materialism and a pale civil religion that made church-going fashionable–as long as people didn’t get too carried away with it–and that equated being a good American with being a good Christian. Now, a few decades later, the culture has shifted, church-going is on the decline, organized religion is unpopular, and public morality has slid into the sewer. But in either case, then or now, the world’s values–wrong values, from God’s perspective–have been present in our society. It’s just now the wrongness is easier to see. So as the church is faithful to God’s Word–as we proclaim a prophetic message and live lives transformed by the gospel–the church is always going to be counter-cultural, and the world will hate us for it. We are an annoying, unwanted presence in the world, because the world wants to tune out God and his Word, and we remind them too much that there is another way to live.

“In the world you will have tribulation,” Jesus continues. “You will have.” It’s guaranteed. You can count on it. The tribulation is going to come. Expect it. Be ready for it.

“In the world you will have tribulation.” “Tribulation,” trouble–the Greek word here is “thlipsis.” “Thlipsis” has the idea of “pressure,” being pressed hard, pressure being brought to bear against someone. Certainly the disciples of Jesus went on to face their share of pressure, tribulation, “thlipsis.” The apostles of Christ were called on the carpet by the Jewish Sanhedrin and put under pressure to stop teaching in that name. That was “thlipsis,” tribulation. They were arrested, more than once, and beaten up. The apostle James was killed for the faith, the first of the apostles to be martyred, and all but one of them ended up dying a martyr’s death. And the one who didn’t, John–he was exiled as an old man. All this was “thlipsis,” tribulation, extreme pressure, exercised by the world, against Christians. And really, it’s been no different ever since. In every century the church, as it has been faithful, has experienced pressure and trouble from a hostile world. “In the world you will have tribulation.” Jesus is saying that to us, too, to all of us here today.

What brings this on? It’s that the church is called to be faithful in proclaiming God’s Word. That includes proclaiming God’s Law, our Creator’s good order for humanity, which the people of this world rebel against. And we tell it like it is, that what God calls sin is sin, no matter what the world may say, and that all men are liable, accountable to God for their sins and subject to his righteous judgment. Obviously, the world does not like to hear this. And so they hate us for saying it.

Case in point, the most prominent recent example: The matter of homosexuality in our society. God’s Word says it is wrong. The world–or at least the current popular opinion in our culture–the world now says homosexual behavior is OK, even good. Just this past week, Rhode Island became the tenth state to legalize so-called “gay marriage,” which is neither “gay,” in the sense of “happy,” nor is it “marriage.” It is a sick, sick mockery of marriage. But now you even have the President of the United States endorsing this insanity.

And so if Christians are going to be faithful to God’s Word, and speak out against the homosexual agenda, they–we–can expect tribulation. This is already happening. The world is bringing trouble and pressure to bear against those who speak the truth.

Again just this past week, a relatively unknown NBA basketball player named Jason Collins announced that he was “gay.” Well, you’d think this guy had just found a cure for cancer or done something else noble and virtuous, the way he was instantly celebrated as a hero in the press, and by the President. And God help you–or somebody help you–if you dare to deviate from the party line and politely suggest that sodomy is a sin.

That’s what happened to an NBA commentator by the name of Chris Broussard. Broussard works for ESPN, and on one of their programs, he was asked what he thought about Collins “coming out.” Here is what he said: “I’m a Christian. I don’t agree with homosexuality. I think it’s a sin, as I think all sex outside of marriage between a man and a woman is. . . . Personally, I don’t believe that you can live an openly homosexual lifestyle or an openly–like, premarital sex between heterosexuals–if you’re openly living that type of lifestyle, then the Bible says you know them by their fruits. It says that, you know, that’s a sin. And if you’re openly living in unrepentant sin, whatever it may be, not just homosexuality–adultery, fornication, premarital sex between heterosexuals, whatever it may be–I believe that’s walking in open rebellion to God and to Jesus Christ.”

Now Chris Broussard here was simply saying what God says about that particular sin, and balancing that by pointing out heterosexual sins as well. As a Christian, he was simply being faithful to God’s Word. But who do you think got the most criticism and hate in the media this past week, Collins the homosexual or Broussard the Christian? The Christian, of course. Chris Broussard has been getting a ton of “thlipsis,” tribulation and pressure, for what he said. One group has launched a petition drive demanding that ESPN suspend or even fire Broussard for his comments. Their petition statement reads: “Chris Broussard’s hateful attack on Jason Collins for being gay was an unacceptable misrepresentation of the Christian faith. ESPN must immediately suspend Chris Broussard and guarantee that their network will never again be used for gay bashing.”

Friends, this is “thlipsis,” tribulation, the kind of pressure Christians will get from the world when we are faithful to God’s Word. Get used to it. It will come. And this is only one small example, about calling sin sin. You’ll get even more tribulation if you say that the only solution to sin is in our Savior Jesus Christ, that no one comes to the Father except through him, and that there is salvation in no one else, that there is no other name under heaven given among men by which we must be saved. This exclusive claim of Christianity is likewise loathsome to the world. They don’t want to hear it. They can’t stand it.

Now is there a way to avoid “thlipsis,” to avoid this pressure and tribulation? Sure there is. Just surrender to the world, give up the fight, do what they say, and the world will leave you alone. They may even applaud you for seeing the light and being so tolerant.

But that’s not us. No, we will be faithful to God’s Word, by God’s grace. We will speak the truth, no matter how the world rages against it. And what will give us the confidence and the courage to do so? It is this: Christ’s promise of peace. Jesus here assures his disciples: “I have said these things to you, that in me you may have peace. In the world you will have tribulation. But take heart; I have overcome the world.”

Jesus has overcome the world! The world did its worst, and Jesus overcame it. The world raged against Christ, put him to death, mocked and beat and crucified the only sinless man who has ever walked this earth. He endured the ultimate “thlipsis,” the greatest pressure and trouble, when he was nailed to that cross. Yet precisely in his suffering and death, the holy Son of God won the victory for us. Jesus took all the sins of the world, all of our rebellion against God–all of our sins, homosexual, heterosexual, you name it–and Jesus bore the judgment we deserve in our place, on the cross. His sacrificial death removes the barrier of sin that separates us from God. His death makes peace between God and man. It wins our forgiveness. What Jesus did for us on Good Friday and Easter–this opens up for us the door of eternal life, even as we see the stone rolled away from Jesus’ tomb and hear the good news that he is risen and lives forever, all praise unto his name.

“I have said these things to you, that in me you may have peace. In the world you will have tribulation. But take heart; I have overcome the world.” Yes, dear friends, take heart! Be strong and courageous. The world cannot hurt you, not really. Not ultimately or finally. No, in the end, you have the victory, in Christ. In Jesus, you do have peace, no matter how wildly the world may rage all around us.

The world is going crazy. It has lost its mind. They call good evil, and evil good. That’s not going to change. But there’s something else that will not change, and that is Christ’s promise of peace to all who trust in him. Lean on that promise. Rely on it. Rest your whole life on this peace that your Savior has secured for you and promises to you. His word will not fail.

“In Jesus, Peace; In the World, Tribulation.” But take heart, dear Christians; the peace that Jesus gives is far greater than any tribulation this old world can dish out. It is an eternal peace that cannot fail and will prevail. “The peace of God, which passes all understanding”–the peace of God, which overcomes the world and all its tribulation–this same peace, “keep your hearts and minds in Christ Jesus.” Amen.