NOTE: The piece below was recently written for my local paper, The Huntington Beach Wave. In the true spirit of Christian thinking and writing, I have done nothing original here. Although the words are mine, the idea was taken (and unashamedly so) from my good friend and professor, Dr. Rod Rosenbladt of Concordia Irvine. After all, all theology is plagiarism.  The piece that I have titled “Basic Christianity” was originally a lecture given by Dr. Rosenbladt at Concordia Irvine under the name “Christianity in Five Verses.” (Basic Christianity also happens to be the title of another wonderful little booklet by John R.W. Stott). It is often seen as the sequel to his well-loved lecture titled, “The Gospel for Those Broken by the Church”. You can listen to both lectures for free at New Reformation Press in the freebie section. 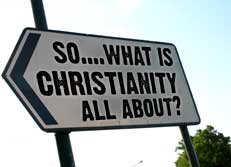 What is Christianity? There are as many answers to this question as there are people who ask. For some, Christianity is about behavior: “Oh, that wasn’t a very Christian thing of me to say, was it?”Still for others it’s tied to tradition or emotion: “I grew up in a Christian home but I still feel like I’m a spiritual person.” Finally, many people view Christianity either as an intellectual force for good or a juvenile way of viewing the world.

To be sure, morals, emotions, and the intellect are important in Christianity. However, Christianity isn’t primarily about behavior, feelings, or the mind, but the God who suffered, bled, and died upon the cross for my sins and the sins of the whole world. This is what the Christian author C.S. Lewis famously called “mere Christianity.”

It’s like when people ask you what a recent movie you saw or book you read is about. You could likely sum up your thoughts for them in a few sentences. And though the Bible may seem like a large collection of books, its main point and overall theme can be summarized the same way.

3. Jesus paid the penalty for my sin by his death on the cross and destroyed the power of death by his resurrection.

4. Jesus gives me salvation as a pure gift, promising that by his death and resurrection he also has power over my death.

5. I can be certain that I’m forgiven all sins – past, present, and future – because of Jesus’ death and resurrection on my behalf.

What is basic Christianity? I wouldn’t consult public opinion polls or Christianity for Dummies. Go to the source, the Bible, which can be summarized in the five following verses.

3.Romans 5:8 – “God shows his love for us in that while we were still sinners, Christ died for us.”

4.Ephesians 2:8-9 – “For by grace you have been saved through faith, and this is not your own doing; it is the gift of God, not a result of works, so that no one may boast.”