To those sitting in prison, facing a death sentence, filled with fear at what awaits them, nothing is more welcome than someone coming with a message of pardon and release. Those words come as words of life in a world of fear and death.

“Words of Life.” That’s what we hear in our readings today–in all three of them: the First Reading, from Acts; the Epistle, from Revelation; and the Holy Gospel, from John. Words of life, to people sitting in prison, overcoming their fear and giving them the faith and the boldness and the final victory that they need. And the good news is, these words of life come not only to the people in our readings, they come also to us, sitting here today.

Today and for the next five Sundays, that is, for the rest of the Easter season, our readings will come from these three places–Acts, Revelation, and the Gospel of John. Throughout we will hear the glorious and life-giving message of Christ’s resurrection and what that means for us. It starts today, and the common thread running through these particular lessons today is that in each one the words of life come to those who are locked up, sitting in a prison.

Now in the reading from the Gospel of John, the people involved are not literally locked up in an actual prison, but they might as well be. For it’s a prison of their own making. “On the evening of that day, the first day of the week, the doors being locked where the disciples were for fear of the Jews. . . .” The disciples were hiding out, hiding behind locked doors, afraid of what might happen to them. Their master had been crucified just a few days earlier, and now they were thinking something similar could happen to them. Jesus’ enemies had been out for blood. They had gotten their way with him, had him put to death. Now, the fear was, would they come looking for his followers? Thus the locked doors.

But if a mighty stone in front of a tomb could not stop Jesus, neither would these locked doors. The resurrected and glorified Lord passes right through and comes and stands among them and says, “Peace be with you.” Here are words of life and peace and pardon. To disciples who had deserted their master in his hour of need, the gracious Christ comes with full forgiveness. “Peace be with you.” More than an ordinary greeting, this is a holy absolution. And then the risen Lord shows them the cost at which that absolution came. He shows them his hands and his side. Hands, still bearing the marks of the nails that held him to the cross. His side, still bearing the mark of the piercing spear that made sure that he was dead. Notice that Christ, even in his resurrection, still bears the marks of his crucifixion. This is how we wants to be identified. This is how he wants to be known. Always as the one who was crucified for our transgressions, the Lamb who was slain, by whose blood we have redemption, the forgiveness of sins.

“Peace be with you.” Spoken by the crucified and risen Savior, these are words of life, words of forgiveness to faithless disciples, words of reassurance to fearful disciples. Christ meets their amazement by showing them that it is really he. They are not seeing an apparition. They are not hallucinating. This is truly their risen Lord standing there, risen with a body they can see and touch and handle. Their fear gives way to gladness.

Again a second time Jesus speaks his peace to them, this time empowering them for their mission as apostles, as his witnesses. He will be sending them out very soon, so that they can speak his words of life and forgiveness to others.

But one of their company was not there that day. His turn will have to wait till a week later. Thomas it is. He didn’t believe their report that the Lord had risen. No, hearing the words is not enough for Thomas. He’s got to see for himself. 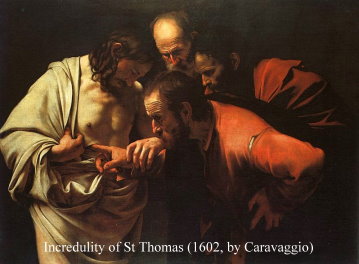 Well, now on this night, a week after Jesus had shown himself to the disciples, the doors are still locked. I guess fear doesn’t die that easily. But Jesus comes again, again on a Sunday, and he stands among them. By the way, Jesus has been doing that same thing every Sunday for 2000 years now, coming among us and speaking his words of life. This time Jesus comes for the special benefit of Thomas, so that he would not miss out, so that he would not be lost in unbelief, but instead believe and be saved. Jesus’ words let Thomas know that he knows about his initial refusal to believe. And this causes Thomas to repent of his unbelief. Now he confesses his faith in who Jesus is: “My Lord and my God!”

That’s good, Thomas, but the words in the first place should be enough. “Have you believed because you have seen me? Blessed are those who have not seen and yet have believed.”

And now we are getting to us. This is describing our situation. You and I–we were not there in that room, either on the first Easter Sunday or a week later. We have not seen with our eyes the risen Christ. We have not touched his hands or his side. Yet still Christ comes to us, and he speaks his words of life to us, and–amazement of amazement–we believe! This is a miracle! This is a gift! And Jesus pronounces us “blessed”: “Blessed are those who have not seen and yet have believed.” Hey, that’s you and me he’s talking about! Did you know Jesus mentions you in the Bible? He does! It’s right there.

So how does this happen? How come people here and all around the world, how come people for close to 2000 years now–how is it that we all believe in, and take our stand on, a man rising from the dead whom we have never seen? Friends, this is the power of those words of life. These words work. They work faith in our hearts. These are living and powerful words, active and creative words. They create the faith in the Savior they proclaim.

This is why God has seen to it to have these words of life recorded for us in the Bible, so that we who have not seen Christ in person–we will still hear and believe and be saved. John the Apostle and Evangelist tells us that this is his purpose in writing them down: “These are written so that you may believe that Jesus is the Christ, the Son of God, and that by believing you may have life in his name.”

The inscripturated gospel, which we read in the Bible, which we hear read from the lectern and preached from the pulpit–and the “insacramented” gospel, which make Holy Baptism and Holy Communion the means of grace that they are–the good news of peace and pardon and life in Christ, this gospel word brings and bestows the gifts it speaks of, as well as giving us the ability to receive those gifts. This is saving faith, created by these words. “These are written”–and read and preached and sacramented–“so that you may believe that Jesus is the Christ, the Son of God, and that by believing you may have life in his name.”

Words of life to people in prison: This is the theme running through our lessons today. Very briefly, then, to the other two, Acts and Revelation. In the reading from Acts, this time the apostles are literally locked up in an actual prison. But locked doors cannot stop God from getting his word to people. The apostles need to hear it themselves, and so do the people they will reach upon their release. So God is going to give the apostles the boldness they need to persevere in the face of persecution. And he’s going to get them out of that prison cell, so they can go out and do the job he has for them to do. During the night an angel of the Lord opens the prison doors and brings them out, and says, “Go and stand in the temple and speak to the people all the words of this Life.” Which they do, with great boldness.

God’s words of life free his people–they free us–from our fear of speaking out and confessing Christ. If God is for us, what can man do to us? Our life is secure in Christ. Threats and persecution cannot shut us up. Oh, they can shut us in a prison, but they cannot shut us up. This is a word of encouragement for the church today, living as we do in a world of increasing hostility to the Christian faith. God’s words of life free us from our fears and give us boldness and courage to live and speak as Christians.

Finally, the reading from Revelation. The aged apostle John is not in a prison made of iron bars, but he still is in a prison of sorts. He has been exiled to the isle of Patmos, a little piece of rock off the coast of Asia Minor. It was their version of Alcatraz. And John is there, old and isolated and cut off from the church he loves. But now Christ comes, appearing to John on–guess what, a Sunday, by this time called “the Lord’s day,” since Christ rose on the first day of the week and that is when the church gathers. The risen Lord Jesus comes to John on the Lord’s day, glorious and brilliant and arrayed in dazzling splendor. John is fearful and falls down at the majesty and might of the Messiah in his glory. But Jesus comes and lays his hand on John and says, “Fear not, I am the first and the last, and the living one. I died, and behold I am alive forevermore, and I have the keys of Death and Hades.” 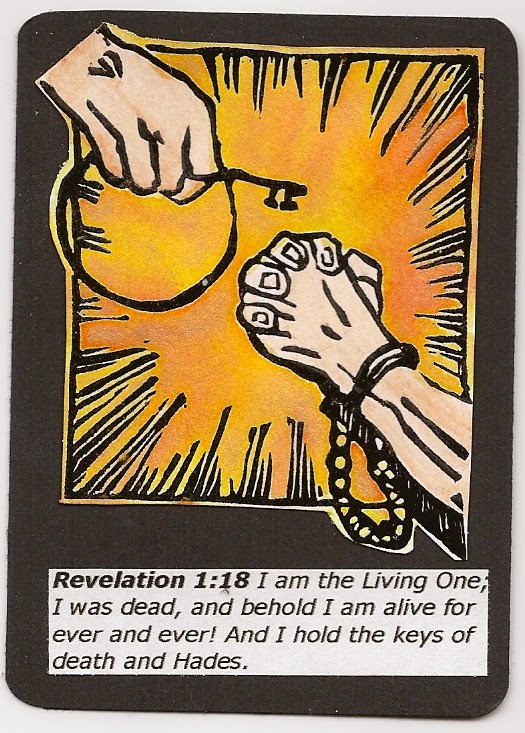 Words of life once again! Words to free us from our fears and give us hope to carry on, whatever our age or adversity. Jesus died–he died for your salvation, for your forgiveness. All your sins have been paid for, in full, by the precious blood of Christ! There is no condemnation for you. God is pleased with you on account of his Son. And this Jesus is the living one. “I died,” he says, “and behold I am alive forevermore, and I have the keys of Death and Hades.” Those doors that would want to lock you in forever, those prison doors of Death and Hell–by now we know that locked doors cannot keep Jesus out. Christ owns the keys to Death and Hades. He is their master. He is their lord. Jesus gained title to those places when he overcame Satan by his death on the cross. The devil has been defeated. Death has been defeated. The gates of hell shall not prevail. The final victory has been won, by our living Lord, and he gives you a share in his victory through his words of life.

So you have nothing to fear. Death has been stripped of its power. Life–new life and eternal salvation, this is what Christ is giving you now on this Lord’s day and throughout this Easter season and on into eternity. The words of life will do their job. Fellow redeemed, fellow believers, you have life forever with Christ your risen Savior.