It’s been a couple of weeks now since Jesus rose from the dead and appeared to his disciples. Last Sunday, Jesus came and appeared to them a second time, on that occasion especially to bring Thomas to repent of his unbelief and confess his faith. Now today Jesus appears to the disciples–seven of them, at least–he appears to them a third time, this time not in Jerusalem, as on the previous two occasions, but now back up in Galilee, the home base for many of the disciples.

Jesus appears to them, unexpectedly, while they’re out on the lake in a boat, fishing, and he’s standing on the shore, standing by a charcoal fire he had made. They don’t know that it’s Jesus there on the shore, but he calls to them, and that’s when the fun begins. So now let’s find out what happens when we hear Jesus call us to come to him “By the Charcoal Fire.”

Here’s how it came about. The boys are back home, in Galilee, by the Sea of Tiberias, which you know better as the Sea of Galilee–although, as a “sea,” it’s really more of a glorified lake. There the disciples are, kind of biding their time while they’re waiting for further instructions from their risen Lord about what to do with their lives. In the meantime, they do what they know best how to do to put a little food on the table, which is to go back–at least temporarily–to their previous line of work as professional fishermen. “I’m going fishing,” Simon Peter declares, and this does not mean just sitting in a boat for a couple of hours with rod and reel, drinking beer. No, when Peter and the boys go fishing, they go fishing! They haul out the net–they’re commercial fishermen, remember–and get in a boat big enough for the seven of them, and they’re out all night, plying their trade, which they know very well, and they know these waters like the back of their hand.

But of course, they work all night, and they don’t catch nothin’. Some nights are like that, I suppose, in the fishing business. They’re tired, they’re exhausted, they’re frustrated, I’m sure.

By now it’s dawn, very early in the morning, and, lo and behold, some guy is standing on the shore. They can’t make out who it is. They’re out on the lake, about a football field away from the shore. The fellow on the beach calls out to them across the water: “Children, do you have any fish?” In other words, “Didja catch anything?” They’ve got to answer, “No.” So the fella answers back: “Cast the net on the right side of the boat, and you will find some.” What, are you kidding me? We’ve just been working all night, using all our skills and know-how, and we’ve come up empty! Don’t you think we know what we’re doing? We’re pros at this, buddy! Who are you to give us advice on fishing? Who do you think you are? Well, whether it was something in this fellow’s voice or just out of a “what could it hurt” desperation, they give it one last try before packing it in. They cast the net where he says, and–whammo!–a net full of fish! I mean, a whole bunch, lots and lots of fish.

By the way, this big catch made such an impression on the fishermen that John even records the number here in his gospel: 153 of them, and they were large fish! What a haul! Now if John were writing this in the Book of Revelation, I would be inclined to search for a symbolic meaning of the number 153. But as it is, I think the 153 here is just to emphasize what a big catch it was. Professional fishermen would be likely to take an inventory of their catches, so noting the number may not have been unusual. So I think the 153 is just the “net total,” so to speak.

So the disciples put in their net, as the man said, and–bam!–there’s this big catch of fish. Suddenly, the bell begins to ring for one of the guys, the light bulb comes on, he puts two and two together and comes up with who the mystery man on the shore must be: “It’s the Lord!” John cries. With that, Peter, always the impetuous one, dives right in the water and swims to shore, so eager is he to see Jesus. The rest of the guys come following in the boat.

They get on shore, and they see Jesus there by the charcoal fire, and–surprise!–he’s already got some fish of his own on the fire. How did he get those fish anyhow? And he’s got some bread. He invites them to eat. By now all sorts of bells should be going off. Remember the feeding of the multitudes, when Jesus multiplied the loaves and fishes? Yes, this Jesus is the Lord of creation, the eternal Son of God, by whom all the fish in the sea and all the grains of the earth were created in the first place.

So there’s that to recall. But even more so, do you disciples remember when Jesus provided a previous miraculous draught of fishes? Peter, you especially ought to remember that one. It was early on in your acquaintance with Jesus. On that occasion, likewise, Jesus told you to let down your nets for a catch, and you told him that you had toiled all night and caught nothing. But at his word you did what he said, and you pulled in a large number of fish. “Depart from me, Lord,” you said, “for I am a sinful man.” And Jesus told you, “Don’t be afraid; from now on you will be catching men.”

But that was then, and this is now. Stuff has happened in between. Like you, Simon Peter, like you denying your Lord–three times!–on that night a few weeks back. That night when you so proudly declared that even if all the others should desert the Master, you would never do something like that. Yet, just a little while later . . . the garden, and the arrest, and then following to the courtyard, and, and . . . “I am not one of his disciples!” And again: “I don’t know what you’re talking about!” And a third time: “I tell you, I don’t know the man!”

Three times, denying Jesus, out in that courtyard, there by that . . . there by that charcoal fire! Now the bells are really going off! You see, on the night when Peter denied Jesus, he was standing by a charcoal fire. Now, here he is again, standing by a charcoal fire. In fact, the Greek word for “charcoal fire,” “anthrakia,” from which we get our word “anthracite”–the word “anthrakia” occurs only two times in the whole New Testament: first in the courtyard scene of Peter’s denial in John 18, and now here in John 21, on the shore with Jesus and Peter standing together by this charcoal fire that Jesus has prepared.

Yes, Simon Peter, your three denials have been forgiven, three times over. Your sins are forgiven, you’re being restored to your position, and you’ll have some good work to do now, Peter, which the Lord will bless.

For some things have happened in between. In between the two charcoal fires, the one in the courtyard and the one on the shore. In between Peter’s denials and, now, Peter’s restoration. In between, Jesus has gone to the cross, where he, the Son of God, purchased Peter’s forgiveness–and yours. Yes, Jesus has been our “in between” guy, the mediator, the man in the middle, making peace between God and sinful man by his holy blood, shed on our behalf. This is how Jesus can forgive Peter’s denials–and ours. Risen from the dead–which was also very early in the morning, “just as day was breaking”–our resurrected Lord Jesus still stands by his charcoal fire, calling all of his denying, deserting, fallen disciples to come to him and be forgiven and be restored.

How about you? How have you denied your Lord, like Peter did? Or are you thinking you’re better than Peter? No, that’s not true. I’ve been just like him, too many times, denying Christ by my words and actions, surrendering to the pressures of the world. Denying him also by my failures to speak, and by my inactions. Like Simon Peter, you and I have denied our Lord Jesus more times than we can count. Some in particular may stand out in our minds and memory, like those times in the courtyard did for Peter.

But the good news today is this: Jesus is calling you over to himself, by the charcoal fire. Hear his voice, and come and receive your forgiveness. Jesus is restoring you today. No matter how many times you have fallen, Jesus will pick you up. He is restoring you to himself, and he has some good work for you to do, which he will bless. He will bless whatever he is calling you to do, in his name, according to your vocation in life–in church, at home, at work, in your family, in your community.

And Jesus has something to give you, to give you strength as you go on to serve in his name. Children, do you have anything to eat? Yes, you do. Jesus has it already laid out for you. It is his holy Body and Blood, given for you to eat and to drink in his Blessed Sacrament. Come and eat. Come and be forgiven. Come and be restored. For Jesus is here, dear friends, and the charcoal fire of forgiveness is still burning. 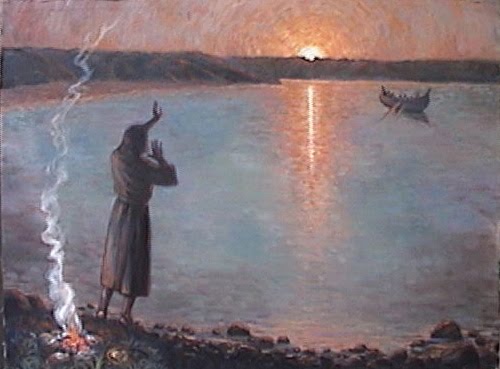