NOTE: About a month or so ago, I came across an opportunity to write a bi-monthly column in the Faith and Values section of our local paper the Huntington Beach WAVE, a subsidiary of the Orange County Register. It’s included as an insert in the weekly paper (every Thursday) and available across town as a stand-alone periodical. The first couple of posts were sermon reviews / previews which allowed for a 425 word summary of a recent sermon. After the initial posts and the editor’s encouragement to continue writing for them on a regular basis, I decided to launch a 3-part series relating to Jesus’ death and resurrection and the defense of Christianity’s historical claims on these events. This is especially vital as we get closer to Easter with all the nonsense they show on the TV these days claiming to have the real story of Jesus and so forth. The challenge of this writing assignment – and it’s a delightful challenge at that – is to get whatever needs to be said in under the word count at 425 words. Below is part 1 of this 3 part series. It could be best called an existential approach to the defense of Jesus’ resurrection. It addresses our need for Jesus’ death and resurrection and how his death and resurrection in turn answer our greatest need, an answer to suffering, guilt and death. In subsequent articles I will begin – as much as one can in 425 words – to address these historical claims with evidence, arguments, sound reasoning, and a few classic apologetic approaches to defending the historicity of Jesus’ death and resurrection.  Also of note, the reader may think that Buddha, Mohammad, and Moses are mentioned as pejorative examples. However, the motivation for their inclusion in this piece is not to deride them, but to make a statement of simple fact: they do not claim to do or say any of the same things Jesus is claiming. And any well-studied student or follower of those religious positions would agree. Now that we’ve gotten the disclaimers and explanations out of the way, enjoy.

What is Easter all about: bunnies, beautifully decorated eggs and marshmallow treats that could survive a zombie apocalypse?  That’s the message we hear: Easter equals spring. But in reality, Easter equals good news for you.

And our world needs some good news. Maybe we’re not even sure what’s wrong, but we know this world is broken. Suffering and death fill the nightly news. Sadly, the television doesn’t keep suffering and death at bay. In addition to all our weekly worries, bigger and more personal problems gnaw at our existence. I know I’ve wronged others. I know I’m going to die. And I know I’m powerless to solve my problems of guilt, suffering, and death. I need rescue.

If you’re drowning in the middle of a storm-tossed ocean, do you need Michael Phelps coaching you on your butterfly stroke, or a Coast Guard helicopter to rescue you? So, when it comes to humanity’s greatest problems, do you need a religious guide, coach or guru telling you what to do and how to behave, or a Savior who’ll rescue you from suffering, guilt, and death? What you and I need isn’t some new spiritual fad, how-to book, or self-help program. We need a Savior.

Jesus – and no one else – claims to take your wrongdoings, shame, and failures and nail them to His cross. Buddha doesn’t promise to die for me. Mohammad doesn’t promise to take away my guilt. Moses didn’t live a perfect life for me. Christianity isn’t about whether or not I’ve done enough good to outweigh the bad, or if I’ve behaved better than someone else. Easter is Jesus’ declaration: ““I’m your Savior. I suffered for you. I was judged for you. I conquered death for you. Heaven is yours.” 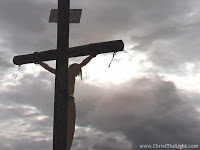 So why is Jesus’ resurrection such a big deal? Death isn’t the end of the story. Easter joyfully announces: Jesus died and rose for you! And by rising from the dead – that is, by having power over death – Jesus is in the greatest possible position to solve our biggest problems: suffering, guilt, and death. What you couldn’t solve on your own, Jesus has already solved for you. Jesus’ death and resurrection is your rescue. That’s what Easter is all about.

In the next column, we’ll investigate one of several logical arguments for Christianity’s historical claim of Jesus’ resurrection.