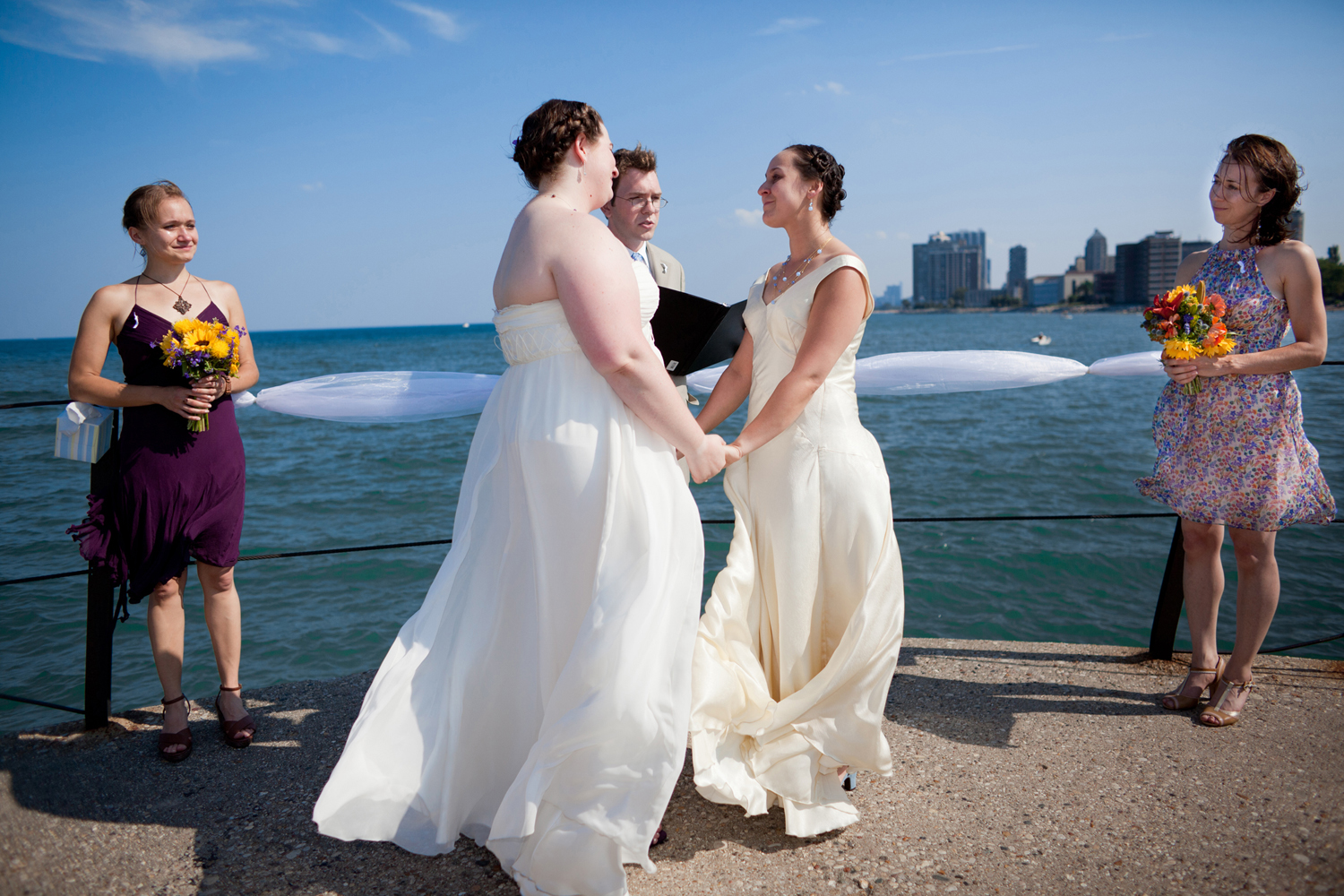 Recently, here on BJS, and others have stated that our churches get out of the state marriage business.  I concur.  This is in response to the onslaught of gay advocacy for pseudogamy and the possibility of the government sanctioning the same on the federal level, especially in the next four years. The prospect of government insistence of churches to preside at pseudogamous weddings looms. The best outcome may be the Supreme Court declaring that marriage in not listed in the enumerated powers of the Constitution and according to the 10th amendment, therefore, marriage is left to the states, including pseudogamy.  However, if the recent experience of 25 years of the ELCA is any indication, the gay activist lobby will pound away at that until a favorable court is in session to undo all marriage laws as it did with state abortion laws.

A few years ago I had the pleasure of meeting Dr. Vigen Guroian (he told me his surname rhymes with the playwright’s William Saroyan), at the time at Loyola College, Baltimore and now at the University of Virginia, Charlottesville.  Dr. Guroian is an ethicist and lay theologian in the Armenian Orthodox Church. Eight years ago, he gave me his address to a meeting of the prelates of his church:  Marriage and Family in Brave New America: On Gay and Same Sex Marriage, which was subsequently published in Touchstone. His original article for Touchstone was edited.  I will be using his original article.

In his paper, Dr. Guroian writes a brief history of marriage in the West. Next he looks at marriage theologically and hence liturgically from his Orthodox theology and practice.  I will use his historical and liturgical insights, and then insights from Martin Luther, for this radical marriage proposal, as a faithful response to the seismic cultural shift in this day and time.  Both Dr. Guroian and Dr. Martin Luther draw their understandings from the Bible, in particular, St. Matthew 19: 6:

So they are no longer two but one flesh. What therefore God has joined together, let not man separate.

To this day, Western Christian understandings of marriage continue to reflect the Roman principle of consent, of which I have made mention.  This consensual view of marriage dominated in Latin and Western Christianity as the church ingested Roman law.  The consent principle certainly contributed to the understanding of the Roman Catholic Church that the bride and groom are the celebrants and that they marry each other rather than being married by the church through the agency of the clerical officiate.  Many of our fellow citizens who regard themselves as Christian or religious assume that consent is the heart of marriage, this whether they conceive of marriage as a contract, covenant, or blessing conferred by the church.

The Church “ingested” Roman civil law, though in the first centuries it was different in the WesternChurch:

The early church saw no need to perform a special ritual for marriage.  Rather, it recognized the legal validity of marriage by the secular authorities and invited couples to share the Eucharist together as a sign of their union in Christ and commitment as a couple to the kingdom of God, above all earthly kingdoms. It is not until the ninth and tenth centuries that a complete rite of matrimony emerges. At this time, marriage was removed from the Eucharist and sharing of the common cup replaced eating of the eucharistic meal.

The reason why the separation of marriage from Eucharist occurred is of great significance, though that significance has the taste of a bitter irony. In the ninth century, Leo VI (Emperor from 886-912) mandated that all marriages henceforth be sanctioned by a church ceremony. A marriage that was not blessed by the church would “not be considered as marriage,’ but as illegitimate concubinage.  Some received this gesture as a great achievement toward the complete Christianization of the Empire.  But it presented serious problems with respect to church discipline, and it forced compromises upon the church that blurred the distinction between church and secular world and between marriage as a legal contract and marriage as a sacrament for baptized believers.  We have been living with these compromises for over a thousand years for better and for ill (and the pun is intended)

In a similar vein the wedding practice in Luther’s day was for the couple to be married outside the church doors after which the couple and the party went into the Sanctuary for the blessing of the Word in front of the Altar (See “The Order of Marriage for Common Pastors”, Luther’s Works, volume 53, page 111).  In my mind, this practice at that time still reflected the two-tiered understanding of marriage from the earliest centuries of the Church: civil marriage solemnized within the Eucharistic/sacramental communion of the Church.  I think this also reflects marriage as God’s gift in creation which in His redemption heals in Jesus Christ, marriage as the most apt reflection of Christ and His bride, the Church (c.f. Ephesians 5: 22-33)

The wedding rite, reflecting accurately that the Blessed and Holy Trinity joins the man and the woman, is not the same in the eastern churches. You are probably familiar with their much different rite: the couple drinking the common cup together, the priest leading the couple, with crowns over their heads, around the Table three times and the priest joining their hands. Dr. Guroian:

You and I will look in vain to find in the Byzantine (Greek) rite of holy matrimony, for example, the familiar exchange of vows.  And in all Eastern rites where this ceremony is present that is a late edition under the influence of Roman law and Latin Christianity… The Eucharist is our home as Christians.  And it is the home of Christian marriage.  In order to honor and secure its true meaning in the minds and hearts of the faithful, we must return marriage to that home immediately, where it obtains it sacred value and distinction and is most secure.

The Eastern Orthodox rite of marriage emphasizes the meaning of our Lord’s Word: “What GOD has joined together…” (Emphasis my own) The rite shows forth that it is  not the man or the woman (or for that matter 2 men or 2 women, or a man and several women, ad nauseum) who are doing the joining together.  The Lord alone joins the man and the woman.  Further, I agree whole-heartedly as a Lutheran and hence a catholic that, “The Eucharist is our home as Christians” still awaiting the kingdom come.  The Divine Service, the Gottesdienst is God’s service first to us, as is His matchmaking between man and woman whom God joins one to the other, as He join the man and the woman to Himself as His Bride through the washing and regeneration of the Word.

At the time of the Reformation, young couples were becoming engaged/betrothed by saying the vows to one another secretly and thus they considered themselves married.  Luther wrote “On Marriage Matters” as an evangelical response to the marriage crisis of his day:  secret engagements/betrothals.  I will not get into Luther’s  complicated response except to say it was the mere saying of the vows, in secret, without parents and the Church,  that supposedly  contracted the betrothal and hence the marriage. The question of this crisis:  Are those vows in secret valid? In response, Luther makes it abundantly clear the Identity of the central and only Agent in marriage:

“…all will depend on sound knowledge and understanding of what this verse, “What God has joined together,” is trying to say.  It does not say, “What has joined itself together,’ but “What God has joined together.”  The joining together is easily seen, but men refuse to see that it is to be God who does the joining.  As soon as a joining together has come about by the parties’ own efforts, they immediately want to hang God’s Name over it as a cloak to hide their shame, and say that God did it.  This is misusing and dishonoring God’s Name and is contrary to the second commandment…Joining by God means that which is done by us according to His word and commandment; joining without God means that which is done by ourselves alone without His word and commandment.  Now we have taught so often that we should do nothing unless we have express approval of God’s word; God himself has nothing to do with us, nor we with Him, except through His word, which is the only means by which we recognize His will, and according to which we have to govern our actions.”(LW, volume 46, page 276;  emphasis my own)

Luther is so clear as the Scripture he interprets:  reread again the emphasized sentence above.  Scripture alone governs liturgical actions and words.  Confessional Lutherans live and die by sola Scriptura and the marriage rite should reflect God joining the man and woman by His Word, not the man and woman by their words in a vow. Note the degradation inherent in the wretched practice of writing one’s vows.  Further note:   vows, on sitcoms, are no longer vows but statements of affection, with friend(s) ‘presiding’ the ‘ceremony’. The actual Sacrament of the Altar is replaced by  the ersatz ‘sacrament’ of the unity candle (and since the couple have probably already consummated the ‘sacrament’ of one flesh before the wedding, this unity candle ceremony is especially phony:  do you really need two candles to light one candle? This insight courtesy of Pr. Louis Smith from a phone conversation).

In the United States Constitution, there exists the free exercise of religion clause. One day we might need to lean on it heavily, and the best position from which to do so will be in our claim that Christian marriage is wholly integral to our worship and is itself a eucharistic feast.

The government  should not interfere with the Church’s “free exercise” of religion in marriage especially of the rite of marriage is without vows and clearly shows forth the Word: What God has joined together.