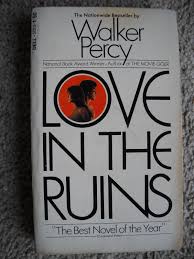 From the novel, Love in the Ruins by Walker Percy (1971), the narrator, Dr. Tom More reflects:

Saint Francis was Doris‘s favorite saint, not because he loved Christ but because he loved titmice… My poor wife, Doris, was ruined by books, by books and a heathen Englishman, not by dirty books but by clean books, not by depraved books but by spiritual books. God, if you recall, did not warn his people against dirty books. He warned them against high places. My wife, who began life as a cheerful Episcopalian from Virginia, became a priestess of the high places. I loved her dearly and loved to lie with her…But books ruined her. Beware of Episcopal women who take up with Ayn Rand and the Buddha and Dr. Rhine formerly of Duke University. A certain type of Episcopal girl has a weakness that comes on them just past youth, just as sure as Italian girls get fat.  They fall prey to Gnostic pride, commence buying antiques, and develop a yearning for esoteric doctrine.”

The following inclusivist benediction was reported on Exposing the ELCA. It is from the ELCA’s  worship planning resource, Sundays and Seasons, published by Augsburg/Fortress:

“God our Father bless you and shield you.
Christ our Mother shelter you and carry you.
God the Holy Spirit guide your journey
+ both now and forever.
Amen.”

This is nothing new in the liberal Protestant denominations. The predecessor church bodies of the ELCA had been espousing inclusive language well before the merger in ’88.    In the Evangelical Lutheran Church in America, the first protest was over inclusive language, not homosexuality. When I was in the New Jersey Synod/ELCA,  a pastor was substituting “Creator, Redeemer, Sanctifier” for the Name of the Holy Trinity in Baptisms.  I can still shock fellow Lutherans, both ELCA and LCMS to this day with the reason for inclusive language:  ‘Use of “Father” and “Son” are patriarchal terms, oppressive of women. And I have been at gatherings in which we were all suppose to pray, Our Father and Mother Who art in heaven…’ “No, no way.”  “Way”.

retreats was literally to retreat from the ELCA. The theses were sent to all ELCA pastors, dated The Feast of the Annunciation, March 25, 1995. I soon signed it.  The usage of inclusivist, modalist language is probably the reason the first thesis addressed inclusive language.  It is as terse a confessional response as I have read to inclusive language:

1. THE REVELATION AND NAME OF THE HOLY TRINITY

“Throughout the world the holy Church acclaims, praises, worships” no other God than the LORD God of Israel, revealed in and named by Jesus Christ as “the Father, and the Son and the Holy Spirit” (Te Deum; Matthew 28:19; Augsburg Confession–Article I).

We reject the false teaching that the naming of God as Father is a human construct to be understood on the analogy of human fatherhood; that it designates Israel’s God as male; that the Trinitarian Name of Father, Son and Holy Spirit is inherently oppressive to human beings in general or women in particular; or that substituting triadic terms is adequate.

The Word of God is silenced among us and driven out of the Church whenever the Name of the Father and the Son and the Holy Spirit is ignored, minimized, marginalized, suppressed or altered in the Church’s preaching and praying, baptizing and confessing.

The use of inclusive language, especially and acutely in the vertical dimension of the Faith, is anathema for a number or reasons:

My question is:  What fuels this to this day?  Answer: ‘spirituality’.  In the recent Logia, Steven D. Paulson, assistant Professor of  systematics at Luther Seminary (ELCA) wrote that the driving force behind all the ELCA’s innovations is “spirituality”, and specifically enthusiasm, or in German “Schwarmarei”:

“…the ELCA has become enthusiasts, fanatics, who swallow the Holy Spirit, feathers and all. They are not immoralists; instead they are on a quest for a greater holiness than yours — and you ought to get ready, since they are ready to fight on this particular matter.

The ELCA is a runaway train of piety that they believe is conducted by the Holy Spirit, who is the Perfecter of the Law. To them, law is not universal and unchanging but imbued by the Spirit with the power to evolve, develop, adapt, and so to make new laws —that is, they have discovered what they consider to be the greatest part of divinity, which is the future, not the past — the Spirit, not the Father.”

An original marginal note in The Formula of Concord: Epitome, Article II, 13 concisely defines Enthusiasts/Schwarmarei:   “Enthusiasts is the term for people who expect the Spirit’s heavenly illumination without the preaching of God’s Word.” The claim in inclusive language is “heavenly illumination” with just enough Scriptural ‘inspiration’ to make the heresy seem holy but not the clear distinction of Law and Promise to stop it.

Note that when Christ Jesus is construed as female, or the Fatherhood of God is denied in the Son’s revelation of the Father, then the Biblical definitions of the creation of male and female are likewise denied.  The God-given created differences between male and female as God’s good creation, for creation, denies both their creation and their goodness. Male and female are interchangeable, but not to become one in marriage.We then have the new Gnosticism.

The second century Gnostics denied the goodness of the Lord’s creation:  they were ‘spiritual’.  Gnosticism is in the Star Wars movies, as when Yoda  is teaching Luke the way of the “force”, “Life creates it, makes it grow. Its energy surrounds us and binds us. Luminous beings are we, not this crude matter.”  Thereupon, Yoda pinches Luke’s shoulder, his “crude matter”.

Gnosticism resulted in either asceticism or libertinism,  the former is the ‘way

of the Jedi’ but the latter had more attraction and still does. Love is then not “agape” but uninhibited lust outside of marriage. After all, the body is “indifferent”. In a recent e-mail reflection by Pastor Scott Murray rightly described enthusiasm as “Revolt against the Body”.  Gnosticism, as in inclusive language,  is revolt against the body, against creation and the Lord’s declaration, “It is good”. It denies the Father and the Son and Jesus came in the flesh.  The inspired Apostle called this anti-Christ.  Incipient Gnosticism may be behind John’s First Letter as in 1 John 1: 8.  We can say we have no sin because the body is crude matter and we are purely spiritual because of the Gnosis/knowledge of the Christ, so we can do with our bodies what we will. After all, we are “luminous beings”, spiritual, not religious, and so does the devil appear as a luminous being (see 2 Corinthians 11: 14).

I came across a phrase from a Washington Post commentator, Charles Lane, in his critique of the current President’s policies as “unchecked righteousness”. I think this works particularly well in the Church.  What checks anything purporting to be “righteousness” is God’s Law.  The devil’s temptations to Jesus was of the good, unchecked righteousness, not faith and the obedience of faith in God’s Word.  As when Frodo offered Gandalf the ring of power,

“Don’t… tempt me Frodo! I dare not take it. Not even to keep it safe. Understand, Frodo. I would use this ring from a desire to do good… But through me, it would wield a power too great and terrible to imagine.”

We have picked up and bought into too many rings of power to save the day within the Church, like inclusive language, church growth, different “models of ministry”, therapeutic deism and the like. It is sad so many are on that “runaway train of piety”.  As Bonhoeffer said, it won’t do to be on a speeding train and keep walking backwards to slow it down.  You have to get off.  Repent or perish.  For all, repentance comes only by the preaching and teaching of the Word of God, the administration of the Sacraments, the life of prayer…all abundantly taught in Scripture and Confessions. This is the Lord’s vocation to His Church and persist and remain steadfast  in this vocation, in and out of season, with patience and respect as we give the defense of the hope that is in us.

James 1:  Know this, my beloved brothers: let every person be quick to hear, slow to speak, slow to anger; 20 for the anger of man does not produce the righteousness of God. 21 Therefore put away all filthiness and rampant wickedness and receive with meekness the implanted word,which is able to save your souls.

I know what it is like to be angry over these matters of crucial importance in the life of the Church.  I know that “the anger of man”, my anger, simply “…does not produce the righteousness of God”.  Believe me, my anger did nothing except make me feel ‘good’ about it and alienate congregants, and my family.   I am slow to hear, quick to speak and I rush to anger.  We have to warn, exhort and encourage, without a doubt.   Only the “implanted Word” produces, grows and nurtures the righteousness of God.  James makes clear that to be “quick to hear, slow to speak, slow to anger” is reflection of the very nature of the Lord as attested in Holy Writ many times, as we heard on Ash Wednesday, Joel 2: 13.    I can not “produce” this righteousness by force of will, at all. The righteousness of God is gift, grace nurtured by His Word alone as in the encouragement and exhortation in the Scripture text above.  It does little good to say, ‘Oh, look at them!’, in regards to topic in this article on inclusive language or any such warning.  “Quick to hear, slow to speak, slow to anger”  is the modus operandi of  Church,including blogging and in our service to our neighbors on many runaway trains.  I have been so cared for.