Today is a day that goes by two names. The one that we’re probably more familiar with is “Palm Sunday.” For it was on this day that Jesus made his triumphal entry into Jerusalem, greeted by the cheering crowds, and the people used palm branches to welcome him. Palms to indicate victory and triumph. Palms to symbolize success and long life. And so on Palm Sunday Jesus is hailed as the messianic King of Israel, coming to Jerusalem to establish his reign: “Blessed is the King who comes in the name of the Lord! Peace in heaven and glory in the highest!”

The people with the palm branches were correct. Jesus did come to Jerusalem that day to bring in the messianic kingdom. But the question remained: How would he do it? How would this Messiah establish his kingdom? How would he win his victory? And the answer is, by suffering, by dying, by being crucified. This king’s conquest would come with strange and mocking signs: being arrayed with splendid clothing; having an inscription placed over him on the cross, “This is the King of the Jews.” From a procession of palms to a criminal’s crucifixion, this is how Jesus would triumph and bring in the kingdom of God.

The suffering that Jesus enters Jerusalem to undertake–this then brings us to the other name for this day, “The Sunday of the Passion.” “Passion.” What does that word mean? The root idea literally has to do with someone being acted upon, as in our word, “passive.” So “passion,” as we usually use it, has the idea that someone has been acted upon, has been overtaken, by a strong feeling. For example, we would say things like “They had a passionate love affair” or “He went about his work with a passion.” Those persons have had something happen to them. 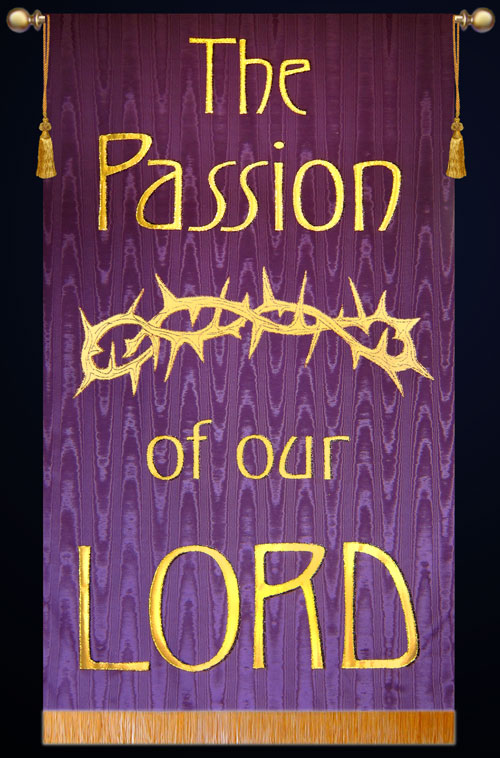 So too the word “Passion,” when it is used in connection with our Lord Jesus Christ, has the idea of him “being acted upon.” It refers to Christ’s suffering and his death. Thus we speak of “The Passion of our Lord.” And so we refer to this day in the church year not only as “Palm Sunday” but also as “The Sunday of the Passion.” For on Palm Sunday Jesus enters Jerusalem in order to enter into his Passion, his holy suffering. This is the great week, that “Holy Week,” when our Lord suffered and died for our sins.

This week we go “From Palms to Passion.” That is the path that our Lord takes to victory. And we hear in the reading of the Passion Gospel just how willingly Jesus lets that suffering happen to him. He certainly knows going into it what’s in store for him. Listen to the things he says: “I have earnestly desired to eat this Passover with you before I suffer”; “the new covenant in my blood”; “the hand of him who betrays me is with me on the table”; “the Son of Man goes as it has been determined”; “this Scripture must be fulfilled in me: ‘And he was numbered with the transgressors.’” Yes, it is clear that Jesus knows that suffering is coming for him, and he allows it to happen.

And suffer Jesus did. Betrayed, deserted, and denied by his disciples. Rejected by the religious leaders of his people. Railroaded by unjust trials and testimonies. Beaten by soldiers, mocked by onlookers. Nailed like a common criminal to a cross.

But this was not any suffering that Jesus deserved. He had committed no crime. He had committed no sin of any kind. As Pilate declared, three times, “I find no guilt in this man.” As the one criminal next to Jesus said, “This man has done nothing wrong.” As the centurion said at his death, “Certainly this man was innocent!” But on that cross, the Son of God was taking our place, taking the judgment we deserved, so that God’s righteous condemnation would not come against us.

And so the Passion shows what is called Christ’s “passive obedience.” He let fall on him the punishment that we deserve. Even though he did no wrong, Jesus suffered the penalty that God’s law requires for all who break it. That punishment is death under God’s judgment. This is what Christ suffered. “He humbled himself and became obedient to death–even death on a cross.”

By that death–the death of the righteous Son of God, standing in the place of sinners like you and me–we are now forgiven. All our sins have been atoned for. Christ’s righteousness is credited to our account. We have been redeemed, set free from our bondage by the precious blood of Christ. Now God accepts us and cares for us as his own dear children, because we have been joined–by baptism and by faith–to his own dear Son.

The Passion shows Christ’s desire to do the will of his Father: “Father, if you are willing, remove this cup from me. Nevertheless, not my will, but yours, be done.” Humanly speaking–and Jesus is true man, as well as true God–humanly speaking, Jesus dreaded the agony that awaited him. And yet he went through with it. So we see here Jesus’ passionate desire to do his Father’s will.

The Passion also shows Christ’s passionate desire toward us, that he has an intense passion to win our salvation. Jesus poured out his blood for you. Jesus cares very deeply about you. He wants you to be saved and to live with him forever. That is why he came. That is why he died. That’s why, having risen from the dead, he now sends preachers to you, pastors, to bring you God’s Word, so that you would trust in him and grow strong in your faith. Jesus has a passionate desire for you. He really wants you to have life in his name.

And so Jesus’ Passion, his suffering, also shows his passion–his strong, intense desire–both to do his Father’s will and to rescue us poor sinners.

This week, then, this Holy Week, we go “From Palms to Passion.” In the kingdom that Christ brings in, the way of victory is the way of the cross. That is the story of this day, “Palm Sunday,” also known as “The Sunday of the Passion.” The Passion of our Lord is where Jesus’ suffering for our sins and his strong desire for our salvation come together. And that is why we come together on this day and praise him with our palms.